I did not have any plans to do anything or go anywhere on the day of my birthday as the ladies were out of town and I was home alone.

That morning, I got a call from my good friend, Lim’s wife, asking me if I was at home. They will always remember my birthday without fail each passing year and I knew what they were up to so I said, “Yes, but don’t come!” but they showed up at my gate, nonetheless, to pass me these… 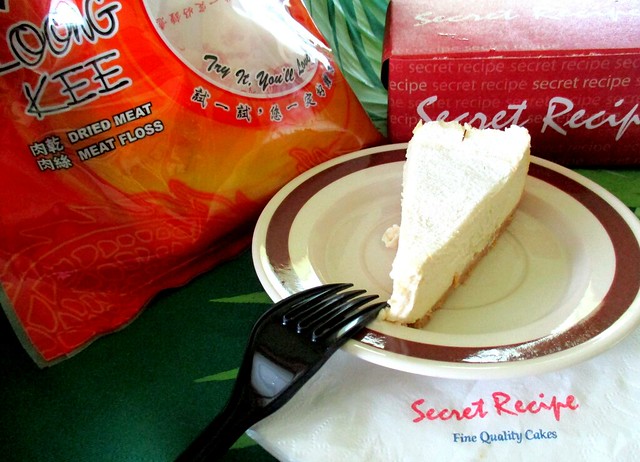 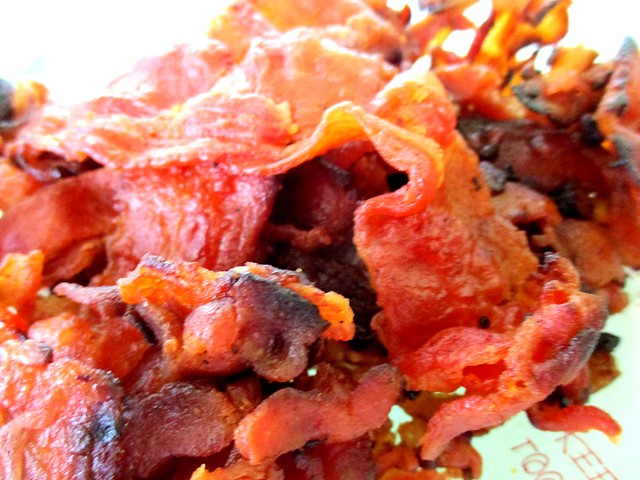 …and they gave me a whole pack of it. That sure was a timely gift, I thought – with the ladies out of town, I could have that for breakfast, lunch and dinner. 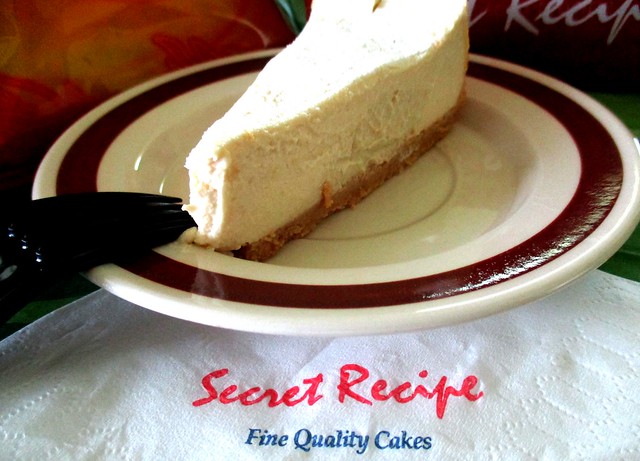 …from that franchise cake shop was really good! Somebody did mention that to me once and now that I’ve tried it and enjoyed it so much, don’t be surprised to see me dropping by there for more of the same.

In the meantime, I also got a surprise phone call from my old friend, formerly known as ahkamkoko. I think the last time I saw him and his wife was way back in 2015 after which he left for his post-graduate studies in New York on a Fulbright scholarship. Well, he’s back now and is presently attached to a  school in Kuching and they were here over the weekend for a friend’s wedding and he asked if I was free for lunch that day. Well, of course I was and we arranged to meet here.

It was a blistering hot day so we went and sat upstairs in a very much nicer setting than the regular coffee shop kind of place on the ground floor – the air-conditioning certainly was a welcomed relief…and of course, I had to order my favourite fish maw soup (RM11.00) for them to try. It was all right that day but I thought it could do with a little less msg and a bit more quality control. 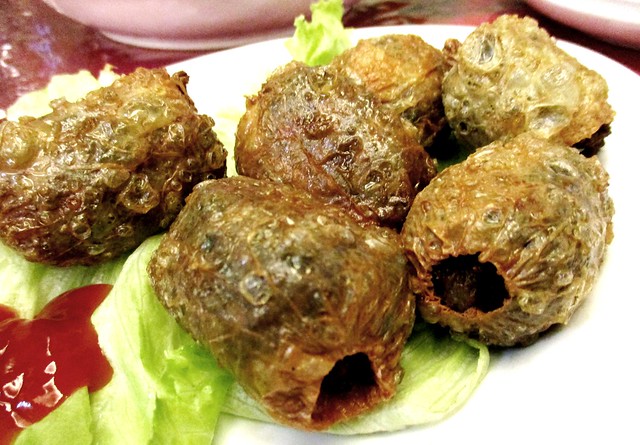 …and they enjoyed it very much. I thought it tasted slightly different that day – maybe it was because of the lokan (clams) used in the minced filling, I wouldn’t know but I liked it a lot better on previous occasions. They said that there would not be any extra charge to go and dine upstairs but I do recall this dish being a little bit less, RM7.80, when we had it downstairs but never mind, as it wasn’t much of a difference.

The waitress came and informed us that the cook had made a mistake with our order for their honey pork ribs and had cooked a sweet and sour version of the meat instead but we could cancel the order, if we so wished. We said that we did not mind and would have it all the same (18.00)… 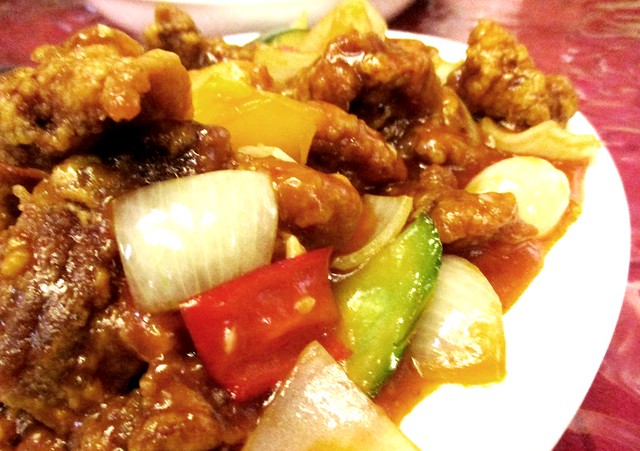 …and yes, I rather liked it even though it was not what I had in mind initially.

We had the bitter gourd omelette with lap cheang (Chinese sausage) – RM13.00… 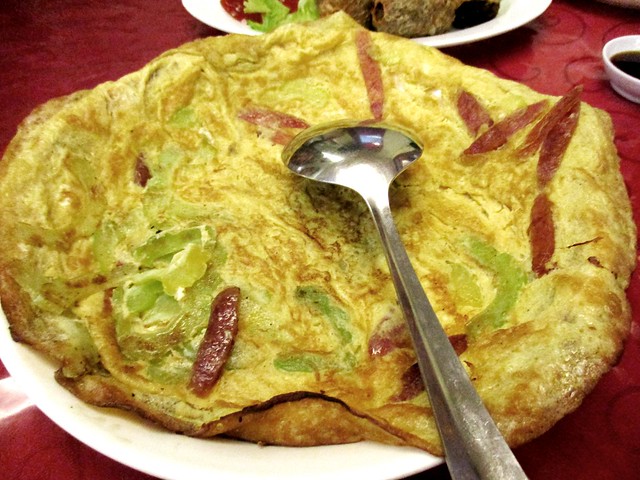 …but the cook or whoever did not beat the egg well so there were parts where the salt had not completely dissolved so it was very salty and that sure affected our enjoyment of the dish.

Thankfully, the stewed pork leg served on a bed of fried cangkuk manis with egg (RM17.00)… 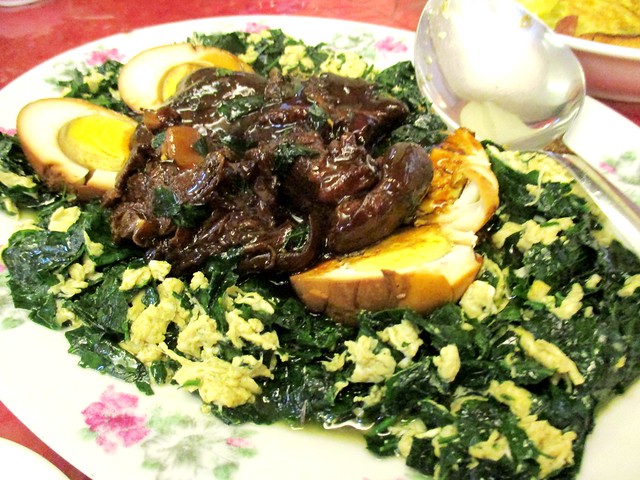 …plus two stewed eggs by the side was great, as always.

The total came up to RM74.00 altogether (inclusive of rice and drinks) and of course, I insisted on picking up the tab – my birthday and a welcome-home treat for my friends.

After lunch, we dropped by here for the gelato and sat there to chit chat and catch up with one another’s lives.

It seemed that my friend’s wife, Michelle, a West Malaysian, had never been to Payung before so I insisted that we went there for dinner that night. Unfortunately, my friend absentmindedly locked his keys inside his car and had to call somebody to pick the lock and open it at around 6 something and that took a good one hour or so and that held us up and we only got to the café past 7.30 or just before 8.

Peter, the boss, had gone home as he had had a long day with his gardening contracts and what not – that is why they are closed on Sundays and will only open after 5 for dinner – plus he has to be home at night to keep his old mum (almost 95, I think) company (the others in the family would take turns and come during the day to do that). I bought a cake from this bakery for everybody to share and they insisted that I cut it and they all sang the Happy Birthday song… 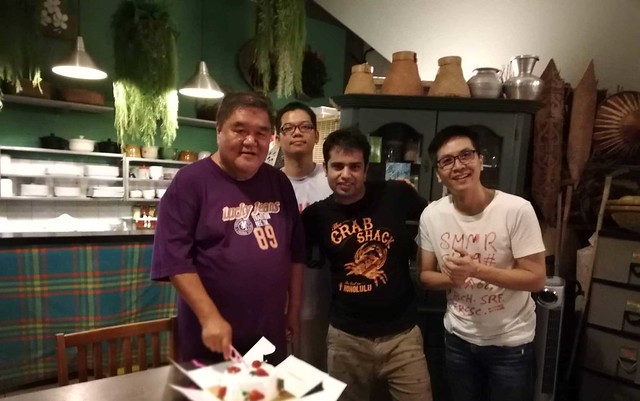 Gee! That sure was sweet of them!

No, I did not take any photograph of what we had that night, not in the dim evening lighting and anyway, I have had photographs of everything on the menu here in my previous posts on the place but Michelle was bowled over by the herbs salad and the tempoyak and the otak-otak fish and the belimbing prawns – she does not eat prawns usually but after having tasted the delightful soup/sauce, she could not resist two or maybe, three. They were out of their green curry chicken that night so we had the Payung fish (ikan keli) and yes, I also ordered the pomelo salad (the papaya salad was not available either). All in all, I would say they enjoyed the dinner a whole lot more than the lunch we had earlier in the day and Michelle, especially, kept singing praises of what we had  that night.

I don’t know how much the dinner was – we got their durian ice cream on the house as it was my birthday – because my friend quietly went to pay when I went some place for a while for a bit of fresh air. Thank you so much, Jarod & Michelle for the treat – it sure was nice seeing the two of you again and good luck, God bless with the little one, coming real soon!

Well, it sure looked like I did have a great birthday after all, don’t you think? LOL!!!

A-PLUS FOOD CENTRE/RESTAURANT (2.293355, 111.823653) is located among the shops along Jalan Kampung Datu behind the block of shops (where Fair Price Supermarket is) near the traffic lights at its junction with Jalan Tun Abang Haji Openg and Jalan Kampung Nyabor while NICA GELATERIA (2.302620, 111.842988) is located at Wisma Liberty/Wisma Sri Minyak at No. 14, Block 3, Jalan Pedada – on your left, past the Jalan Ulu Oya Road traffic lights if you are coming from town and PAYUNG CAFÉ (2.284049, 111.833014) is located at No.20F, Lanang Road, Sibu, Malaysia, back to back with the multi-storey car park of the Kingwood Hotel which faces the majestic Rejang River.