In the peninsula, they have Tenaga Nasional (National Energy) while in Sarawak, we have our Sarawak Energy or what we still call SESCO to this day as that was what it was called before, the Sarawak Electric Supply Corporation.

I bought our house in 1988 and I don’t know what special arrangements my dad made with the former owner and all these years to this very day, we have been paying for the electricity bills issued to his name.

However, it seems that SESCO is switching to e-billing so I clicked the link and went to the website to register. The first thing they asked for was my name (according to my MyKad) and I hesitated – should I just type my name or the former owner’s name? In the end, I decided to go and change it once for all to avoid any complications in future.

I contacted my ex-student from a previous school, now an officer at SESCO, Sibu and she told me to go over to the office which I did. When I got there, she said that she had checked the contract and found out that the guy, wherever he is now (after he sold the house to me, I heard that he moved to Johore to manage a bank there), has a lot of contracts to his name (I guess he owns a lot of property) so they cannot transfer his deposit to me – I would have to have a new contract drawn up registered in my name.

Everything went well – I had to pay the deposit (RM500.00) plus another RM150.00 connection charges for meter fee and RM10.00 stamping fee. They told me they would come to my house to fix a new meter… 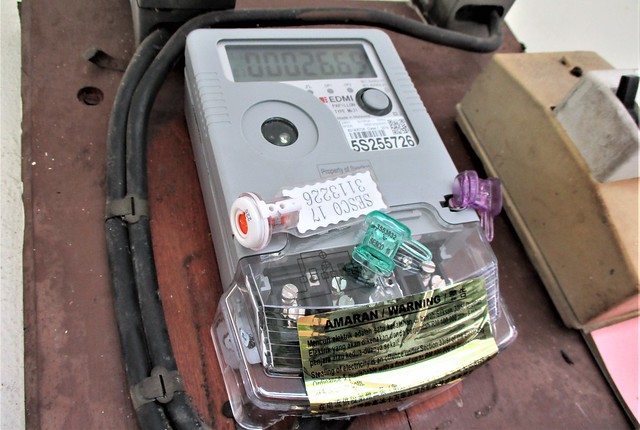 …a digital one, the following morning – the existing meter was as old as the hills. Ah yes! My ex-student gave me another complimentary umbrella, the same as the one she gave me sometime ago when I went to the office regarding my auto debit and yes, they registered for me so I shall get my bills via email from now on.

The next day, I waited and waited and waited but there was no sign of them and finally at around noon, they showed up  and got the job done in no time at all. I watched them at work and I was amazed by how they had to take a lot of photographs of the old meter and the new one from all kinds of angles and one was busy the whole time doing whatever he was doing on his laptop and after they were done, it took him quite a while in the car to come out with the form for me to sign – he said the printer was slow. Good grief!!! In the old days, they would just come and change and all documentation, report and what not would be done when they got back to the office…and they say with all this modern technology, our lives would be a whole lot easier? Hmmmm!!!

Unfortunately, the story does not end there. They turned off the main switch outside so they could do the work and once they finished, they switched it back on. It turned out that my UNIFI modem refused to reboot – the TM light at the side came on but none of the little ones appeared. The other two, whatever they were, looked all right.

I called their 1-100 number and got to speak to a machine. She gave me 4 options but none seemed to be what I was looking for. I called the TM service centre number but nobody answered and I kept being redirected to their voice mailbox. In the end, I gave up and drove to their office. Who says with technology, things are a whole lot easier these days. Tsk! Tsk!

Luck was on my side! There was nobody at the office, just the security guard and a sweet young girl at her table with her monitor right in front of her. Yes, she was very nice and friendly and I did not have a problem at all in lodging my report. She told me the people would go to my house that afternoon or to the latest, the next morning. I had no choice but to go home…and wait. By the time I was done by around 1.00 p.m., I saw that a queue was starting to form right behind me.

The technicians showed up very soon at around 2.00 something and they changed the modem to a brand new one… 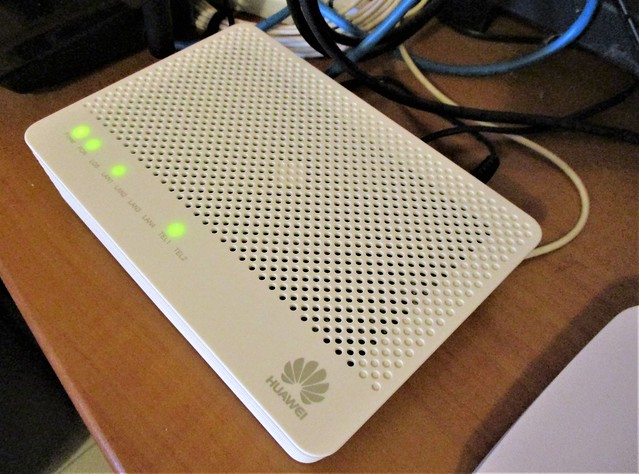 …free of charge. When I first registered and got connected, the whole set was all silvery chrome in colour and looked impressive. Over the years, they have changed the other two (I think one is a router and the other small one is for the online TV) so now I have three odd ones, all looking different. Ah well! As long as they work fine, that would be the most important.

I asked them what happened and they said that we did not switch it off when the SESCO guys turned off the main switch outside and when they turned it back on, the power surge caused it to go kaput. I give them canned drinks to take back and a tip in appreciation of their prompt response for them to go for tea.

Gosh!!! All this is just one day…and what a day it was!