The other day, when I shared the photo of my plate of brown rice and buckwheat noodles, fried char kway teow style… 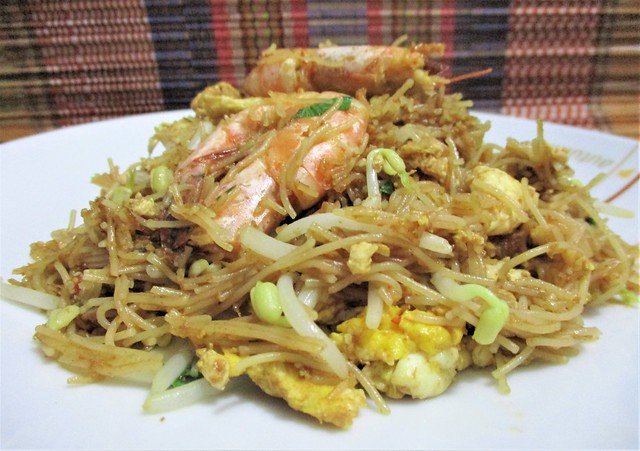 …on Facebook, it got a whole lot of raving reviews. Everybody seemed to think that it looked really good and yes, I thought so too and thankfully, it tasted great as well.

It so happened that on that same day, a Facebook friend shared her photograph of the bihun she cooked and yes, it looked very good too. Unfortunately, her posts are all in Mandarin so I could not tell what style/recipe she followed. I browsed through some of the comments she received, the translations, of course and in her reply to one of them, she shared this Youtube video from April last year, showing how she cooked it.

First, she fried some egg, scrambled it and took it out. Then she fried some minced pork, followed by julienned carrot and thinly sliced leek. After that, she poured in one whole can of cockles and then, one whole can of stewed pork slices. Usually, I would fry bihun with one or the other, never both together like that. Finally, she added a whole lot of water like she was cooking some kind of soup and put back the egg that she had taken out.

I noticed that no oil was used in the cooking, no frying of chopped garlic or sliced shallots – I would usually have that to start off when frying bihun. Gosh!!! Was that salt or msg that she added at 1:40 followed by no less than two of those bottled sauces? *faints*

However, it was what she did next that took me by surprise, something I had never heard of or seen people doing before. She took out some of the ingredients – she probably needed more space in the wok – and put in the (made-in-China) bihun straight out of the wrapper into the soup! Usually, we would soak it in hot water or even boil a bit to soften before use, never mind whether we are going to serve it with fish ball soup or Sarawak laksa broth or whether we are going to fry it. The last few times I used the bihun from China, I had to soak to soften and then I rinsed it again and again and again to get rid of the unpleasant smell.

I think she used two packs of the rice vermicelli and after it had softened, she put back the ingredients that she had taken out earlier by which time the soup would have more or less dried up, all soaked up by the bihun. She covered the wok for a while lo let it dry up completely before dishing out everything. I must say it did not look like she “fried” the noodles – in fact, it would be something like our “moon” version of our Foochow fried noodles but at least, we do fry it first. I don’t know what this would taste like but to give credit where credit is due, it did look good.

Anyway, I went browsing through some Youtube videos and came across this one – the guy looked like a professional chef and yes, he too threw in  the bihun straight from the pack! It seems that he was cooking some Putien Hinghua bihun so you do not need to soak to soften first. I wonder if we can get that here…and now I am kind of curious as to how many of you do not soak your bihun to soften before cooking?

Well, at least now we know what they call Hing Hua bihun at many stalls in town – the one fried with canned clams in soya sauce and cangkok manis…

…isn’t what they claim it to be. No wonder when I first blogged about it many years ago, my cousin in Kuching, married into a Hing Hua family, said that her mother-in-law would cook it sometimes and it was not like that!