They have lifted the MCO here in Sibu and switched to the more relaxed CMCO though I really wonder why as the cases are not decreasing and new clusters are sprouting out here, there and everywhere.

It seems that they are confining the lockdowns to specific areas with a lot of cases instead of the whole Sibu Division, including all the surrounding districts. As a result of this, it is generally business as usual elsewhere but with strict adherence to the stipulated SOPs (hopefully). I, for one, am not ready to venture out freely just yet and even though dining in is now allowed, I would prefer to keep my distance.

The other day, I saw that we had run out of butter in the house so I went to the nearby shops in the next lane to buy and I purposely went very early, at the break of dawn, so there would not be a lot of people around. The first shop that I went to had just opened and the two employees on the early morning shift were mopping the floor.

Unfortunately, they did not have any, out of stock so I went to the other shop in the vicinity. The boss went to the fridge to have a look and informed me that the brick ones (less than RM15.00 each) were all sold out but they did have the ones in tins, Golden Churn, no less – RM26.00 each so I bought that.

Since I was out already, I decided to go and tapao (takeaway) breakfast for everybody. I got my tiffin carrier from the car boot and went to the back of the coffee shop where the chu char stall was and placed my orders through the back door. I did not know whether there were any customers in the coffee shop or not at the time – I did not bother going in through the front as I was not keen on encountering any fellow human-beings around.

I bought this Foochow fried noodles, the “moon” version (RM4.00)… 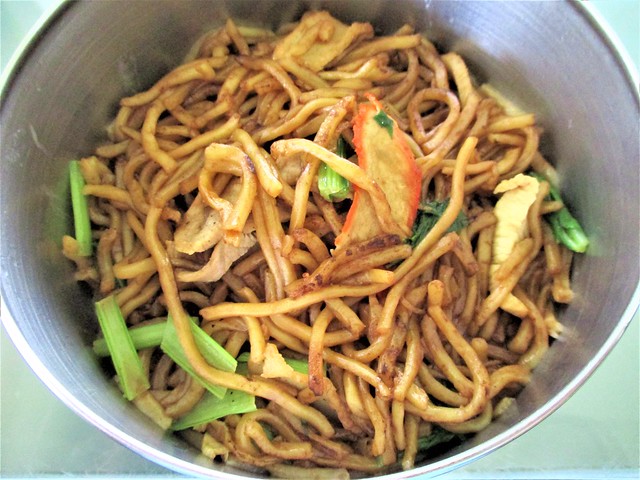 …for myself and my missus. Of course by the time I got home, it would have dried up – the noodles would have soaked up all the sauce/gravy but as a matter of fact, we find that some are very much nicer this way, not all but yes, there are places where we prefer buying the noodles home to enjoy. There are also people who say the same about the kampua mee at some places, not as nice when eaten there, much nicer when taken home to eat. 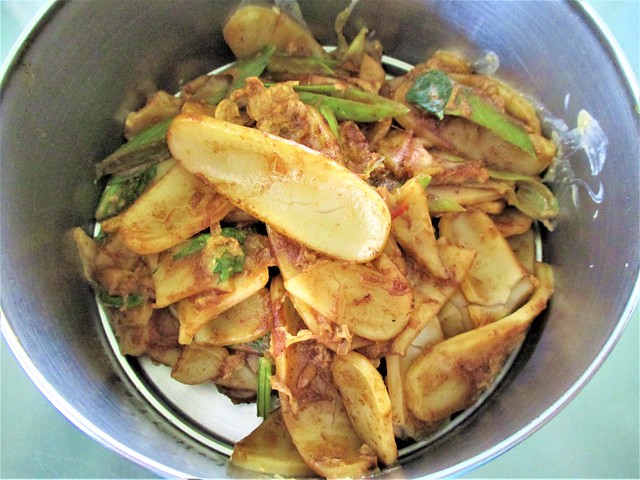 …for my girl – hers was dry so the aforementioned problem was not applicable here. I wanted to pay the guy RM12.00 for the three but he said the total was RM13.00 as char pek koi is RM5.00 a plate.

He started telling me that a packet of pek koi (rice cake) is over RM4.00, so very expensive so that is why he would have to charge more. No, I did not linger to chat with him – I just paid the money and left quickly. I think this COVID-19 has made me kind of anti-social – I used to enjoy small talk, mingling and chatting with people that I meet, ever strangers but not anymore. Sighhh!!!