When I cook instant noodles, I will boil the noodles in water and once done, I will pour the water away before I cook the soup with the seasoning(s) provided and put the noodles in it and serve. That is because I read somewhere  that they coat the noodles with wax and the above process will remove the latter which they claim is a health hazard though there are websites that tell you that’s an urban legend, not true.

However, I do not do this when cooking my favourite made-in-Sibu Daddy Mee because there is a bit of seasoning coating the noodles… 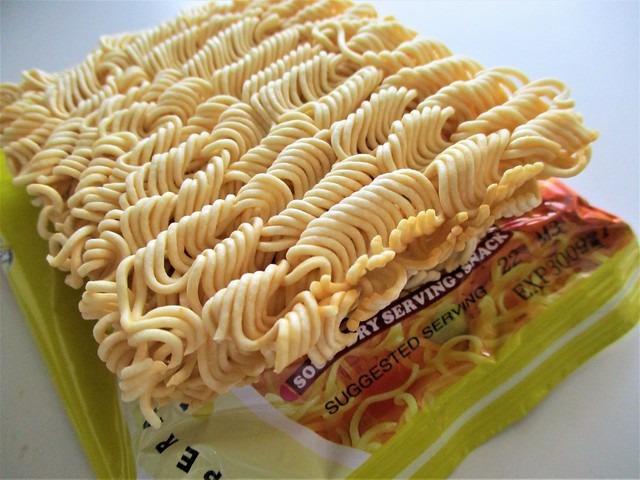 …for those eating it as a snack and doing that would wash all that away. As a result, I found that it would not be as nice.

I don’t think I would want to eat it as a snack though – that makes me think of those little packets of junk food that kids love to buy at the school canteen. In the meantime, my loyal follower and regular commentor, Irene, in Kuching insists that this is her favourite brand of instant noodles and she always has some in her pantry and lately, she has been telling me that she likes it dry. In her own words, she said, “I prefer chicken flavour cooked dry than in soup. Just toss with the fried shallot and seasoning, without any extra ingredients needed, it will taste heavenly too.“

I was kind of sceptical initially because as I have said earlier, boiling the noodles and draining away all the water would remove the nice taste but nonetheless, I decided to give it a try.

I boiled the noodles in a little bit of water, not too much – just enough to cover it and I emptied half of the sachet of seasoning into it. In the meantime, I got ready the remaining half and the fragrant shallot oil from the other sachet in a plate… 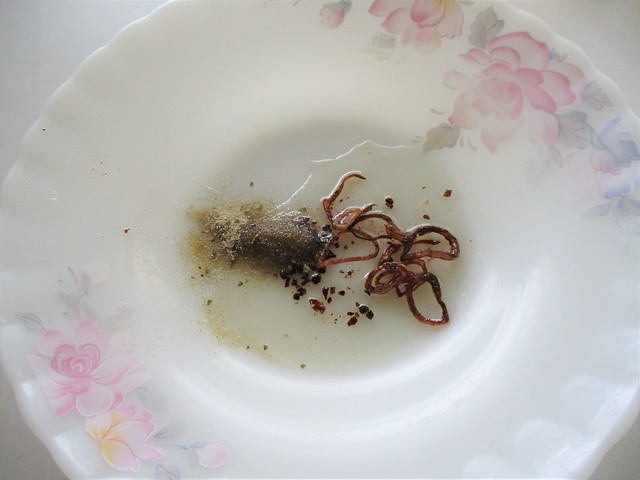 …plus a bit of the fried shallots that I had at hand.

Much to my delight, by the time the mee was cooked, all the water in the saucepan had dried up. I poured everything into the plate and tossed well and served… 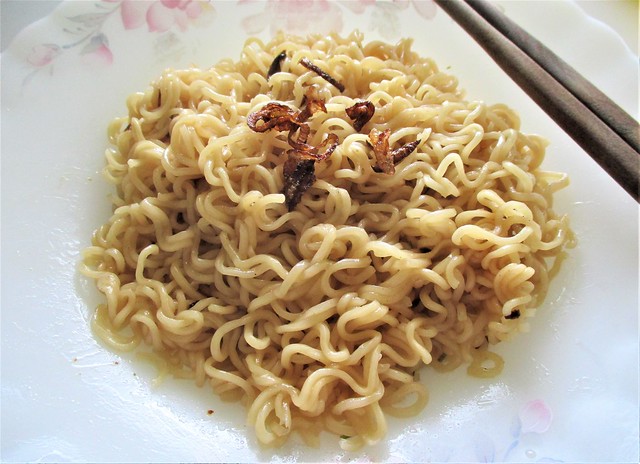 Yes, it was very nice. something like kampua mee but not exactly as the texture of the noodles was different. However, I found it to be VERY salty – I think since I had added half of the sachet while cooking the noodles, that would be more than enough for me. Perhaps if anyone is cooking it this way, it would be better to just hold on to the remaining seasoning and sprinkle sparingly according to taste.

But the thing is I love the soup very much and eating it dry like this, one would have to forego the enjoyment of that. That was why I decided to try something different from the above.

The second time around, I cooked the noodles in a lot more water, added half the sachet of seasoning and half of the shallot oil and once ready, I poured the soup into a bowl… 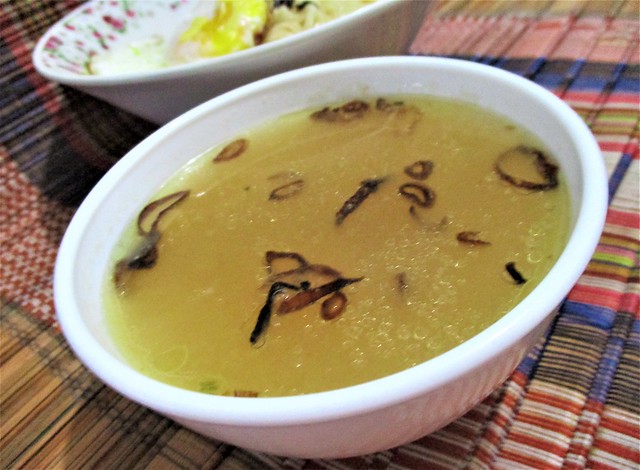 …and garnished it with my own fried shallots. Unfortunately, I did not have any spring onion at that point in time – adding a sprinkling of that would surely bring the taste to a whole new level.

I tossed the noodles in the remaining shallot oil and seasoning and served and yes, it was just right this time around, not too salty. The soup was as nice as I’ve always known it to be, anytime nicer than the plain water plus msg and bits of spring onion that they will give you at the kampua mee shops and stalls.

I sure don’t mind having it this way sometimes for a change and at around RM4.50 for a pack of 5, that works out to only 90 sen a plate, with the delightful soup to go with it. So very cheap, don’t you think?