Sometime ago, my missus came home absolutely distressed! There was a shortage of shallots in Sibu, the nice ones from India, or what we call chang kia (baby onion) or bawang merah (red onion) in Malay.

She said she heard there were places selling them for over RM30.00 and of course, she simply refused to buy. If we had to buy, we had to buy, I replied – just use them sparingly but no, she decided she would do without those and use Bombay onions, what we call tua chang or bawang besar in Malay (big onion) instead. Actually, we do not use shallots so much in our cooking. I think we use garlic a lot more, and ginger and Bombay onions too.

Anyway, I was at a sundry shop near my sister’s house and I saw a basketful of orange-coloured oval-shaped shallots and one full of small Bombay onions, more red in colour than usual, and another one with the big ones. I asked the people there and they told me in no uncertain terms, “Mai bay! Mai bay! Bay phang!!!” (Don’t buy! Don’t buy! Not fragrant!) I had not seen any anywhere else since.

It so happened that a friend of mine was sharing a link to some online home-delivery grocer and I clicked to go and have a lot. Much to my surprise, I saw that they had “red onion” so of course, I was interested. I asked my friend and she said she would help me find out. Eventually, she told me to go to a shop in the vicinity of the Dewan Suarah (Civic Centre) here – they are selling them at RM26.00, adding that she only bought half a kg to use sparingly, seeing how it was so very expensive. 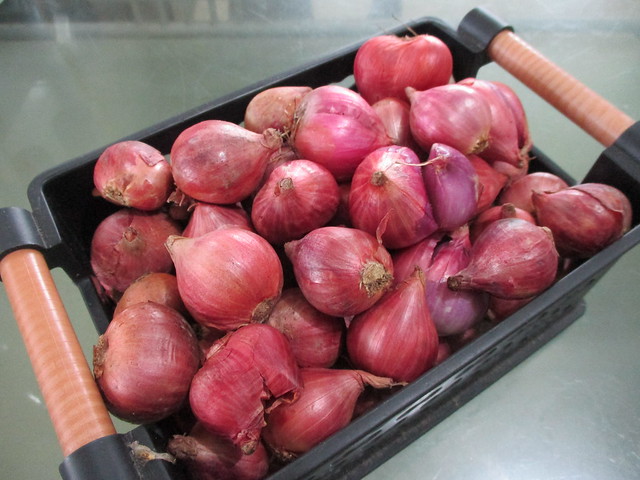 They did not look as red so I asked the lady where they came from and she simply ignored me. Good grief!!! With such poor social graces, I was surprised that people would still patronise the shop. I mentioned that on Facebook and yes, a few people agreed that she was kind of proud and my missus said she would never want to go there as the people were so unfriendly.  I saw a basket full of crabs, not very big and initially, I thought of buying. However, seeing that the attitude was so poor, I decided I could go without them and just left!

I shared the above photograph on Facebook and got a lot or responses. One said that she saw some in the town centre, going for RM30.00 a kilo. Another said that these should be the ones from India as the China ones are selling at only RM16.00 a kilo in Bintulu. Another said that in Kuching, the China ones are RM10.00 a kilo, the Thai ones RM18.00. Finally, a paternal cousin of mine dropped by and he said they were from Myanmar but they would be out of stock soon because of the street demonstrations and political unrest there at this point in time like what happened in India where the farmers took to the streets and brought the whole farming economy to a standstill.

Well, I took one and peeled and sliced… 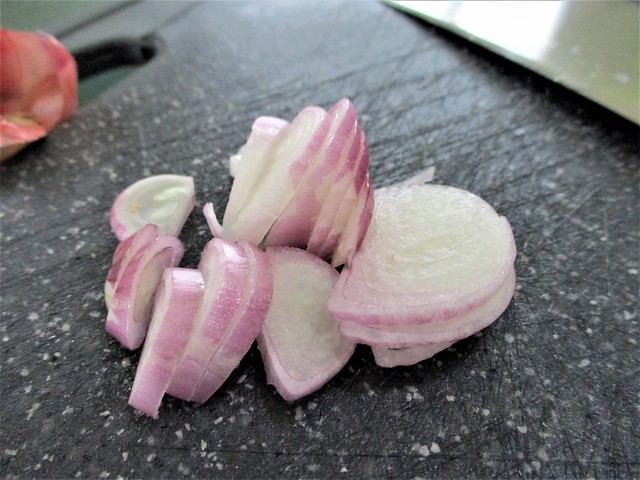 The fragrance was there but it was barely noticeable. I had to bring it close to the nose before I could detect it.

I fried the slices in a bit of oil… 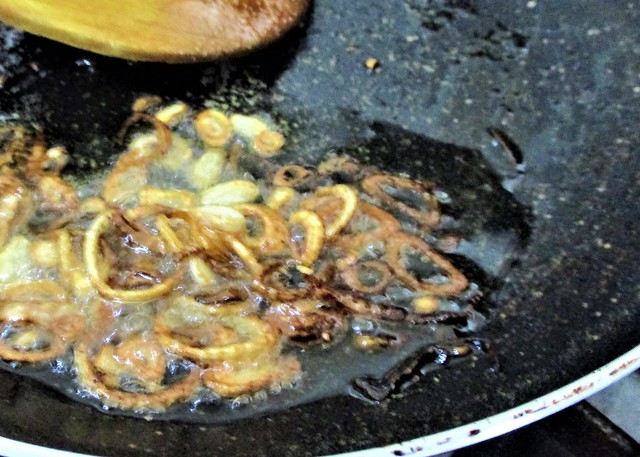 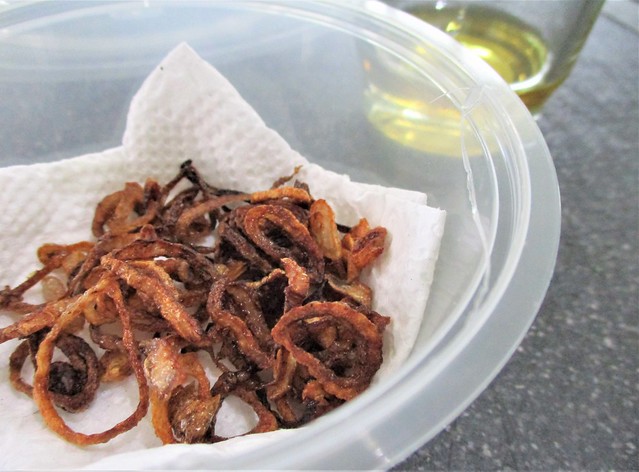 …to toss my noodles and while I was doing it, the fragrance filled the whole kitchen. Obviously, it wasn’t too bad after all.

By the way, if you intend to do the same, make sure that you remove the strips of shallot before they are too brown as they will continue to cook in the residual heat. If you wait till they are golden brown, you may end up with some burnt ones.

I’ve planted some and hopefully, some will sprout and I can help myself to my own-grown spring onion soon. Ever since the ones I had ran out and I did not have any more shallots to plant, I had to go without spring onion. I sure miss that!