There wasn’t much to look forward to this Christmas. My sister was on duty in church on Christmas Eve so we decided to have our dinner on the evening of the actual day. The rest of us attended the service online.

On Christmas morning, I took out the Christmas fruit pudding… 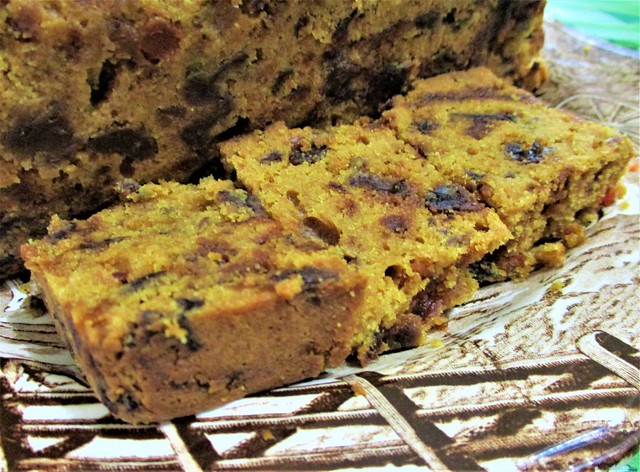 …that my aunt in Kuching gave me last year when we were there. I had kept it in the freezer all this time and yes, it was as good as new after I had defrosted it and instead of steaming it, I baked it a bit in the oven. That certainly brought back so many pleasant memories of my childhood days.

It is a steamed cake actually – my mum would make one BIG one every year using the Kjeldsens’ butter cookies tin, the biggest size, to serve to family and friends who dropped by during our Christmas open house. My aunt, my maternal uncle’s wife actually, has carried on that family tradition and would make it every year.

Other than this pudding, my mum would make cakes – butter cake, Milo and marble, Golden Churn, no less. Back in those days, things were very simple so at the time, we did not have all those fancy cakes that we see today but I must say they were just as nice, if not nicer! We did not have any electrical appliances then so your truly was the “official” manual egg beater using that spring-like contraption that looked something like the shock absorbers in our cars.

My mum would make some lovely cookies too and my role would be to put that bit of cherry in the centre of the kuih dahlia…and I would be keeping my fingers crossed the whole time, wishing and hoping that a tray would be overdone, a shade darker than it should be and yes, in the end, I would get to enjoy those rejects without having to wait for the festival before we could get to eat any. Hehehehehe!!!

Of course, she would cook her special curry that everyone would, without fail, flock to the house every year to enjoy with her “kuih bayee” – her pan-fried version of naan or something like that and when that ran out, there would be this plain sandwich bread from one shop here called Kim Guan Siang to go with the curry.

Well, other than eating that Christmas fruit pudding, there wasn’t much else the whole day till our dinner that evening. I wanted to buy a turkey from a hotel in town, over RM350.00 a bird, I think (my missus said it was over RM200 each, uncooked, at one of the local supermarkets) but the ladies were against the idea and said that they would roast a chicken… 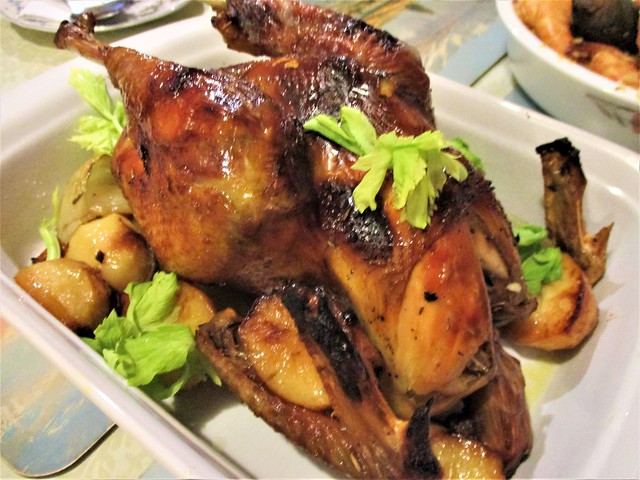 …instead. They do not really enjoy turkey plus one would be way too big for us to finish.

They said they would cook a seafood paella… 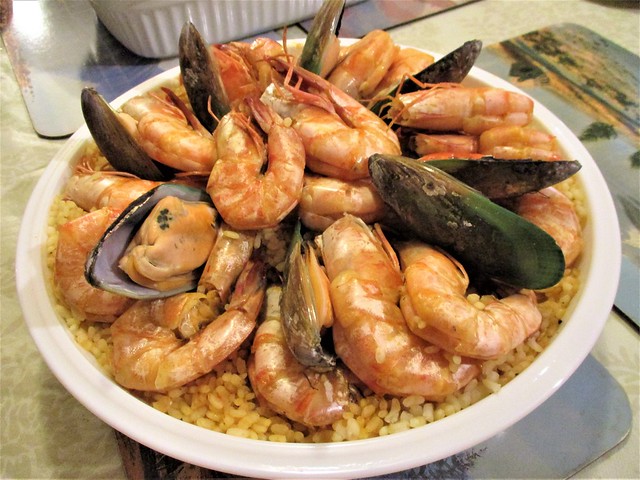 …and I was of the idea that we would just have a salad dish and that would be enough for the 4 of us. Obviously, the ladies had other things on their mind.

I wanted to buy a rack of lamb but the ones at the shop that day were so so HUGE and so was the leg of lamb. I bought those racks at least twice before and they were very nice, just the right size and to everyone’s liking. I ended up buying three lamb shanks, two smaller ones and another one a bit bigger. My missus said she would cook them so I suggested taking the bigger one – that would be more than enough but as you can see… 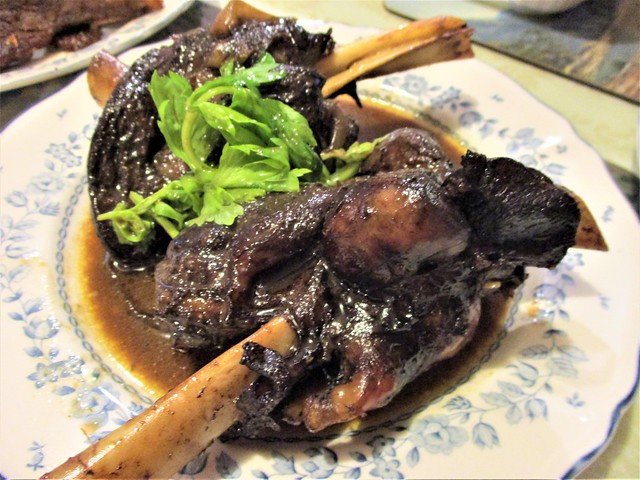 …that fell on deaf ears and even with the two smaller ones, we only managed to finish one and had to keep the other one for another day.

No, that wasn’t all! My missus took the two packs in the freezer that were left of the New Zealand striploin beef that I bought sometime ago and pan-grilled the slices… 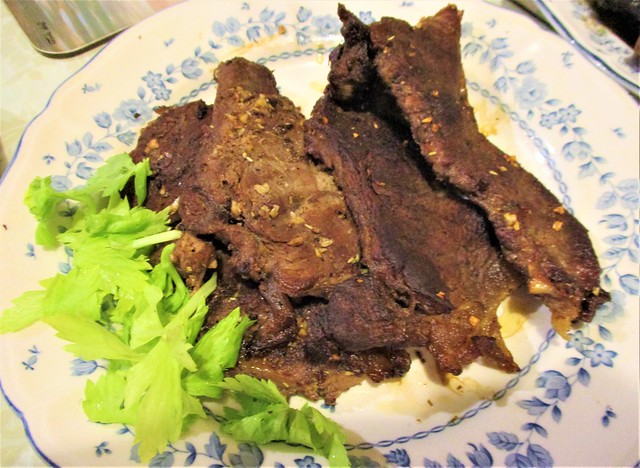 Unfortunately, it was overdone and turned out rather hard and on the dry side. 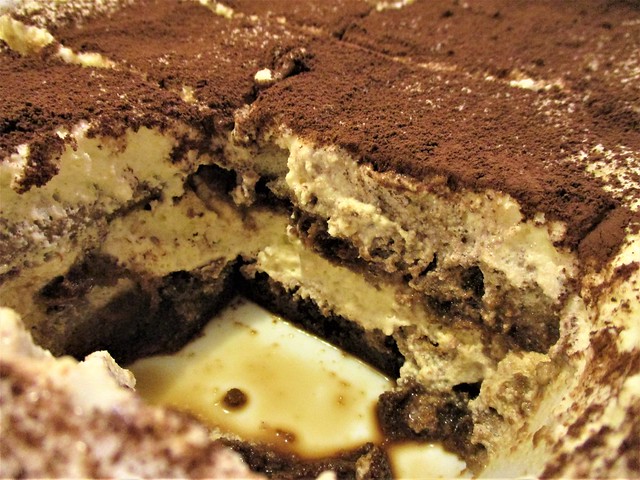 That sure was a delightful dinner and seeing how terrible things have been, we sure were thankful that we were able to get together and enjoy the food and company for yet another year. It’s New Year’s Eve tomorrow and at the time of writing, we have not decided what we would be having for dinner. We’d probably have something lighter and less of a hassle to prepare, a steamboat dinner perhaps.

When I was small, New Year’s Eve would be a steamboat event at my maternal grandma’s house at Queensway before they moved it to Kampung Bandong here. Way back then, there were only those charcoal ones and that afternoon, everyone would gather to make all the preparations.

My auntie, the since deceased oldest uncle’s wife, would be the one slicing the New Moon abalone very very thinly so there would be enough to go round but she would not have any second thoughts about giving me a few slices to enjoy, straight from the tin – they always spoilt me rotten, they did. Somehow or other, it was so very nice then, the fragrance would fill the air once the can was opened unlike the burn-a-hole-in-your-pocket ones (same brand) these days – why, they are on display at a supermarket here in a cabinet under lock and key!

Come dinner time, all would have bathed and dressed up nicely to gather at the long dinner table – there were so many of us, can’t remember how many steamboats we had but I can remember vividly the beautiful blue & white Chinese ceramic crockery with dragon designs that we used. These days, the extended family is  a thing of the past – members of the family are scattered all over and getting everyone together like in those days gone by would not be so easy. Things are simply not the same any longer. Sad.