Many years ago, I cannot remember exactly when now, during Chinese New Year – either on the eve or the day itself, Ol’ Faithful’s wipers suddenly went haywire. I quickly called my workshop guy but unfortunately, he was away, spending the festive holidays in Kuching. However, he sent one of his trusted employees who came right away.

The guy said that the bar or whatever inside controlling the wipers was broken and since all shops were closed for Chinese New Year, there was no way he could get the spare part. He suggested welding it back together again, adding that many had that same problem and that was what they all did, no need to get a new replacement. Of course, I agreed, not that I had much of a choice and thankfully, after he had repaired it, it had been doing well all this while.

I was so glad and so very grateful that I paid him for his services and I gave him an ang pao and also ang paos for his children plus cakes and cookies and Mandarin oranges, whatever we had in the house for them to enjoy. He was reluctant to accept but of course, I would not take no for an answer.

Well, it had been raining quite a lot here lately and the other morning, I noticed that one of the wipers had started misbehaving so I drove to the workshop to get them to fix it. I asked for that whole thing to be changed so it would be as good as new.

In the meantime, I went strolling around the supermarket and the shops in the vicinity and I stopped by this coffee shop. I went there before but I do not recall anything I had that was so nice that I couldn’t wait to rush back for more – I think that was the first and last time I dropped by there and that certainly speaks volumes.

Anyway, this time around, for want of something to eat, I decided to check out their nasi lemak special (RM6.00)… 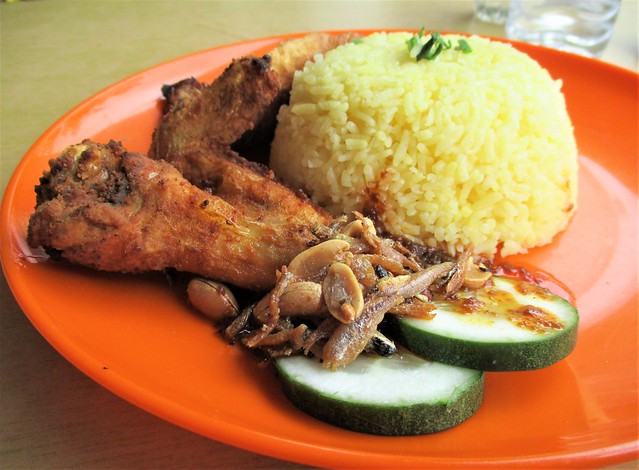 Who knows, sometimes miracles do happen!

I told one of the guys what I wanted and sat down to wait but nothing came. After sometime, a girl came to my table to ask me what I wanted. For fear of ending up with a duplicate order, I told her that I had already told the guy. She said that he probably had forgotten so I had to order again. When you are in the food industry, EVERYTHING counts, not just the food, and this slipshod kind of service sure got them into my little black book right away.

After that, I continued to wait. I waited and waited and waited. I asked if they had not cooked their nasi lemak yet – I could try something else instead if that was the case…but they just brushed me off saying that it was coming. Finally, after what seemed like forever, it came and no, I was not at all impressed by that horrendously-coloured orange plastic plate that they used.

When I had a closer look, I was HORRIFIED!!! They had burnt the egg… 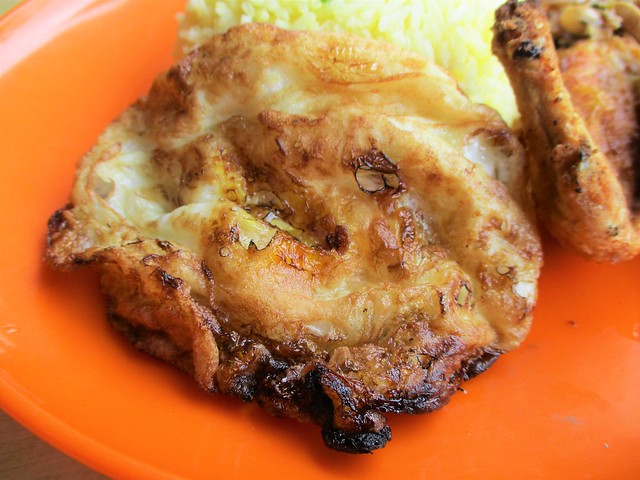 …and the yolk was overcooked, not runny at all. Well, I’ve said this more than once and I say it once again – anyone who cannot even fry an egg has no business to be in the food business. Period.

The rice was yellow – usually, nasi lemak is white…or green, if they add a bit of pandan in the cooking. Well, never mind the colour! What’s important is how lemak (rich in coconut milk) the rice is – that’s what counts the most! Sadly, it was not lemak at all but no, it was not plain white rice tinted yellow. It had its own taste but unfortunately, that could not save the day.

I was already half way through, when the girl who took my order came and served me the complimentary soup… 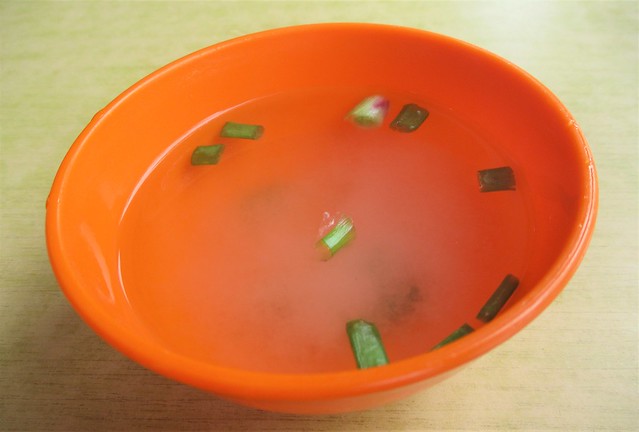 No, it was not the usual sup tulang that you will get at the Malay shops and stalls nor the chicken soup. To give credit where credit is due, it was quite nice but I was already so mood-spoilt and I just had a sip to taste and left the rest of it in the PLASTIC bowl, thank you very much.

The fried chicken was all right, thank goodness they did not burn that too and no, they did not bother to remove the heads and the insides of the ikan bilis (dried anchovies) either plus they sure were not very generous with the sambal… 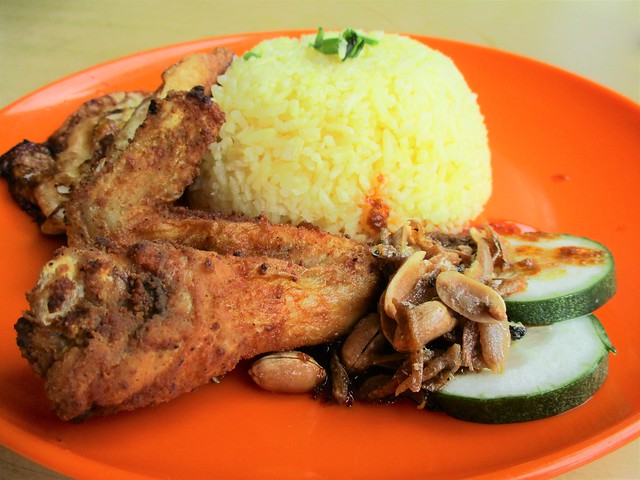 All things considered, you will never catch me coming back for this or anything else for that matter ever again. I should have gone for the old lady’s here instead – she’s at the coffee shop at the other end of that same block. Hers may not be the best in town, not anything to get excited about but at least, it was decent and a whole lot better than this one here.

They do have their following though – that is why they have been around for a very long time now and what I’ve noticed about this place is their fried fritters are mighty popular. I’ve never tried them though, not that I’m going to especially when the batter is so orange in colour and I am quite sure they are very strong on the essence. Those people seem to love it that way.