The other day, I asked my girl if she would like to go out for lunch. That would give the mum a break from her daily routine of having to cook our meals for us day in and day out. Of course, she had no objection to the suggestion and off we went, the three of us.

My girl said we had not been here for a while but I was not sure if they would be cooking round lunchtime or not. I did go there myself a couple of times for the kampua mee and the fried noodles when they started selling noodles in the morning and I was told then that they would stop at 10.00 a.m. and from 10.30 onwards, they would be serving chap fan (mixed rice). I told my girl that we would go and have a look and if they only had chap fan, we would decide whether we would have that or we could always go some place else.

When we got there, it was what I had expected. The kitchen was closed – they would not be cooking and all the dishes for the chap fan were ready for intending customers to pick and choose. My girl went to see and yes, she liked what she saw so we decided we would have our lunch there.

There were quite a number of customers coming and going to buy the food, take away and other than us, there was one guy at one table and later, another came and sat at another table. Maybe we were early – around 11, not noon yet and there wasn’t any crowd. I sure was very happy with that and yes, they made sure that we went through the SOP.

This was what I had… 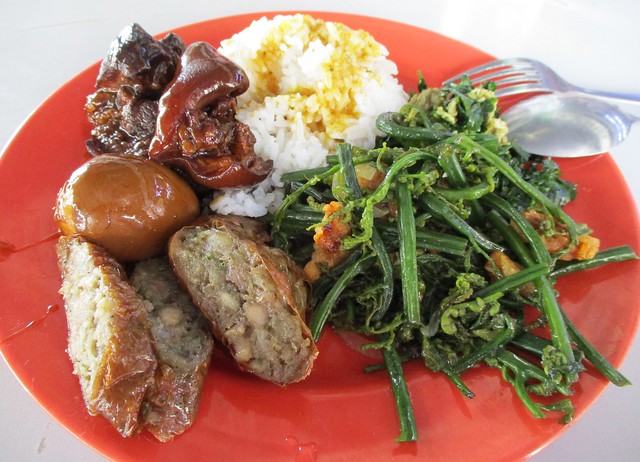 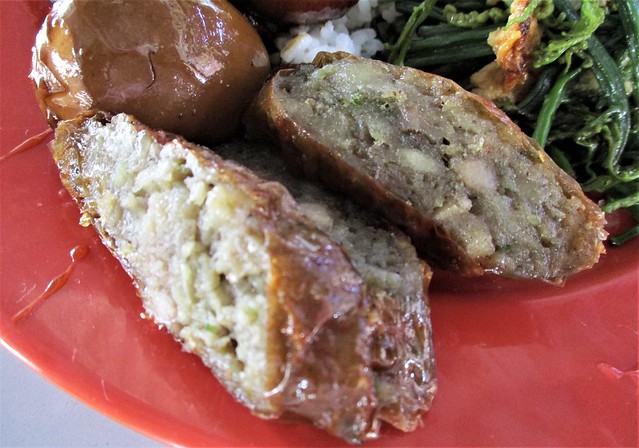 …was good. My girl also had that and she had her favourite brinjal with minced meat and also some fried tofu mixed vegetable (baby corn and stuff) dish that she liked a lot.

I also had the stewed pork trotters… 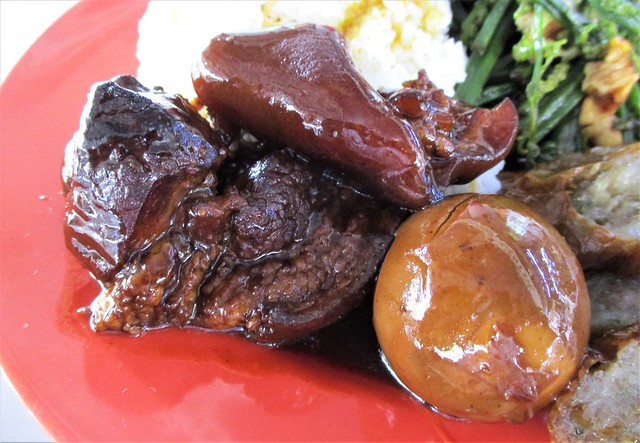 …that my missus also had, together with her two choices of vegetables. However, I also asked for a stewed egg – everyone would know that I would not be able to resist that but she did not.

For my vegetables, I had the cangkok manis fried with egg and this very nice paku (wild jungle fern)… 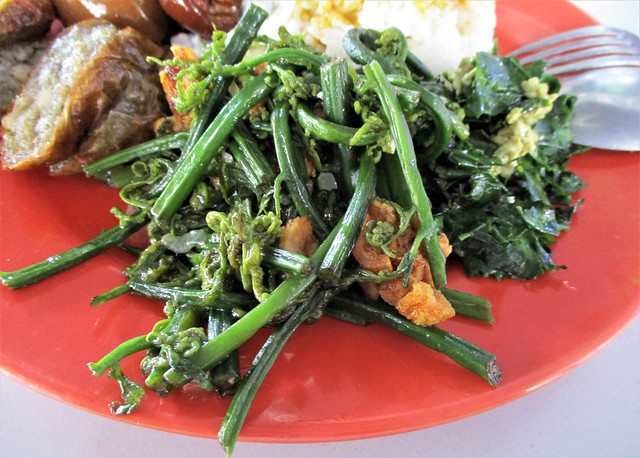 I don’t know how they cooked the latter but I really loved it and they even garnished it with pork fat crusts (ju yau zhar), nice touch!

I don’t know how much that platter I had cost but I heard the lady boss saying something like RM4.50. My guess is it was RM5.50 for two meat plus an egg and two vegetables while what the ladies had, one meat and two vegetables were RM3.50 each. Add RM5.00 for the drinks that we had and yes, the total altogether was RM17.50, less than SGD/AUD/NZD6.00 for 3 persons, $2.00 each. That sure is cheap, I’m sure you all would agree, for a simple lunch that is no less satisfying.