La mer is French, meaning the sea and if you are one of those who love anything that has what they call “the smell of the sea“, for instance, clam chowder or squid ink pasta, you should check this… 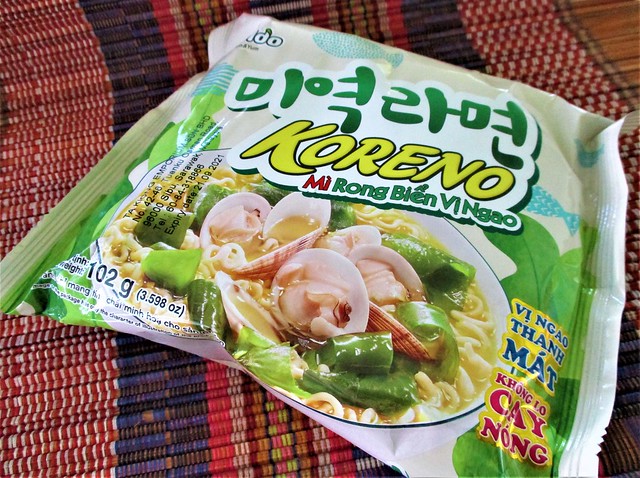 This brand sure needs no introduction as it has been around for a very long time. Long long ago, a student of mine asked me to go and try this very nice Korean noodles – I think it was this brand – so I went and bought one, RM2.00 a packet. Yes, it was very nice – the texture of the noodles and the taste as a whole were great, a cut above the rest and nothing like the spicy ones that have taken the world by storm today but it did take a while longer to cook. Of course, at that price, I never did go back to buy more, thank you very much.

All this while, I assumed it was a Korean product. That was why I was rather surprised to see so much Vietnamese words on the packet. Upon closer scrutiny, I saw that it is now made in Vietnam.

Well, my missus came home the other day with two packs of their noodles. My girl said there was some kind of promotion going on right now…and a few days later, the mum tried a packet of this one for breakfast and was praising it to the skies. The daughter followed suit the following morning and she too liked it a lot. Needless to say, not to be left out, the father simply had to try as well. LOL!!!

There are two sachets… 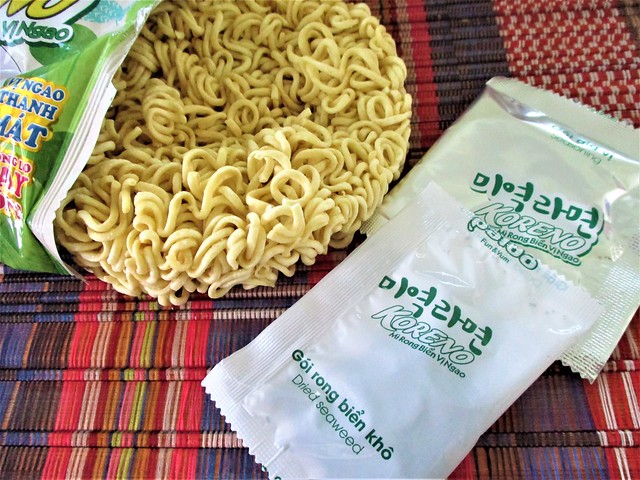 …inside with the noodles, one with the seasoning and the other with the dehydrated seaweed.

The instructions said that I would have to boil some water and cook the seaweed first to rehydrate it. I also threw in two of the fresh, sweet and succulent prawns that I had in the freezer and once done, I added the noodles and half of the sachet of the seasoning. I could smell the fragrance of the clam soup, that “smell of the sea”, while it was cooking and yes, I did put in a few Thai basil leaves from my garden too. Once done, I garnished it with a bit of chopped spring onion, also from my garden… 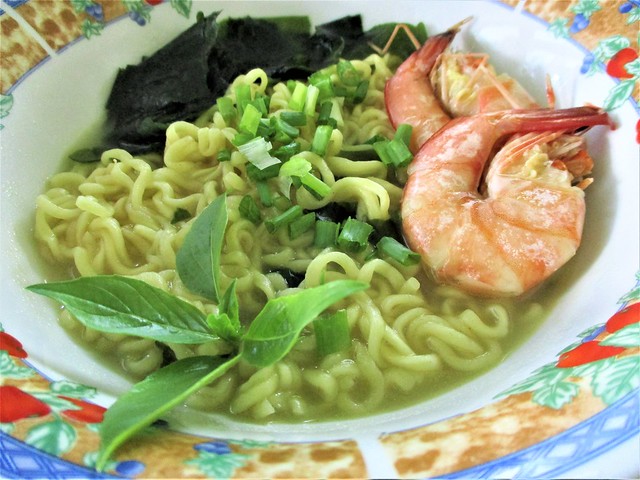 Yes, it was very nice. I think the next time I go back to that shop where I bought the oysters that day, I would buy their frozen clams – they do have those, just like the ones in the picture on the packet. I bet if we add those, it will bring the taste to a whole new level.