I hardly ever venture to this part of the town anymore these days now that my girl is no longer teaching in her jungle school beyond Selangau Bazaar. At that time, I used to go quite frequently to send my car for servicing, change the engine oil and what not and if I had the slightest suspicion that there was a problem, I would be at the workshop there in no time at all and of course, when problems arose time and time again.

These days, I would go and change my car engine oil and everything every six months or so even though I have not driven up to 7,000 km. and since I do not go through those horrendous road conditions on the horrifying Pan-Borneo Highway, I do not have much of a problem with my old Wira. However, there were some screeching noises in the early morning when I started the engine and it got worse and worse so I took it to get it fixed.

While they were working on the car, I roamed around the shops in the vicinity and stopped by this one…

…that has been there for as long as I can remember. There used to be a very nice Chinese chu-char (cook & fry) stall at the back and I did hear of people going all the way here from the town centre just to eat the guy’s noodles. However, eventually it closed down – I think I heard something about the guy having some health problems or something.

This coffee shop opposite the workshop was doing so well and they extended it in 2018 but now, they have closed down that part and gone back to its original size. The outlet of that Kuching franchise, the so-called Singapore Chicken Rice, has closed down already but the branch of the beef noodles shop in town is still going strong and yes, this one is still around as well.

Anyway, going back to that aforementioned coffee shop, I decided to have something from this Malay stall… 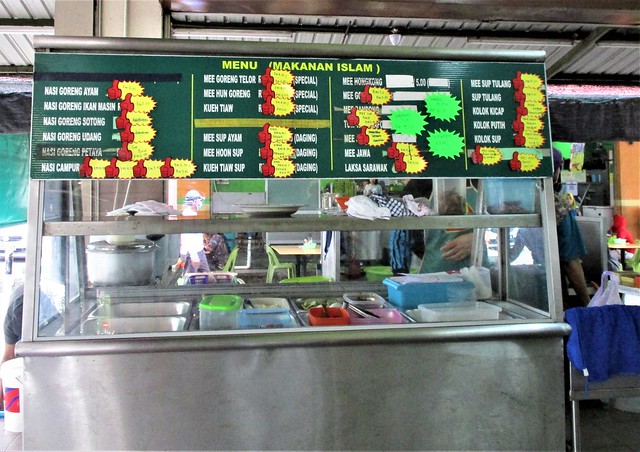 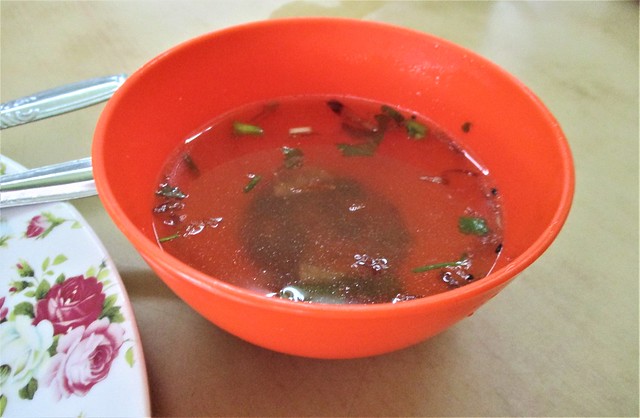 I always like the ones at most of the Malay stalls and shops – they will give you their sup tulang (bone soup) or some very nice chicken soup. Don’t expect anything half as nice at the Chinese kampua mee stalls – most of the time, theirs is like plain water with a pinch of salt and a few bits of chopped spring onion  added.

I wanted the special but I did not want the fried chicken that would normally come with it. I saw some nice deep-fried ikan kembong in the display cabinet and I told the lady I would want one of those instead. She said those were left over from the day before and refused to serve that to me. Left with no choice, I had the biasa/regular (RM4.00)… 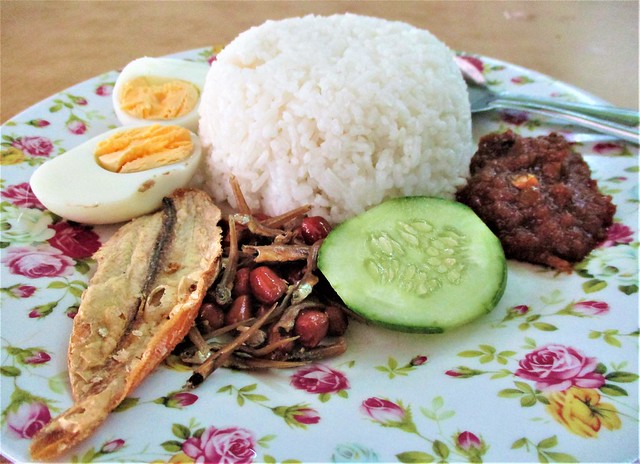 Like those times when I had it before, the rice was all right, not anything to get excited about. I could detect a slight hint of the santan (coconut milk) which, of course, means that at least, it is better than at some other places where I had the displeasure of eating their not-lemak-at-all nasi lemak…and mixed with the lovely sambal, the fried peanut and ikan bilis (anchovies) and the salted fish, I would say that it wasn’t too bad, not at all.

I ordered a cup of coffee, small and when it was served, the Malay/Muslim lady said, “Khuai er!” (RM1.20) Don’t be surprised! There are many of them around these days that are conversant in Mandarin…like how many in my childhood days could speak Hokkien or how people in the upriver towns of Kanowit, Song and Kapit could speak Iban and those downriver, Matu, Daro, Oya, Dalat and Mukah, could all speak Melanau really well.