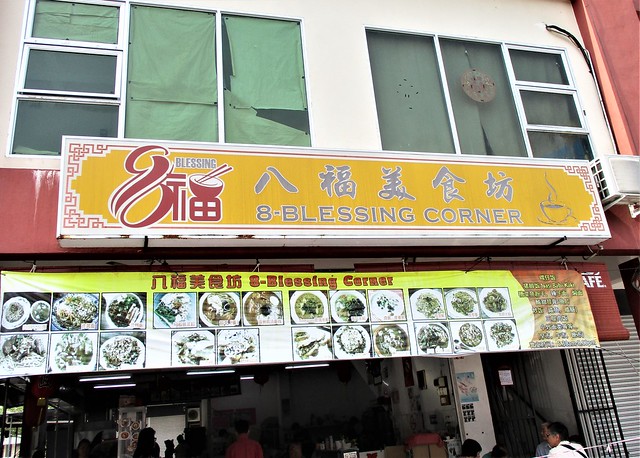 …to eat as you would get not one, not two…but EIGHT blessings! LOL!!! I’ve been to the coffee shop on the other side facing the Lovers’ Bridge across Sungai Merah a few times and I did walk over here to have a look but I never got round to coming here to eat.

Incidentally, this one at the end of the block, below the gym, had closed down for quite sometime now and this café has moved here. There’s a new coffee shop here where the Malay satay shop used to be while the latter has moved back to the Bandong area of shops now.

Anyway, back to that coffee shop that I went to the other morning, I heard that they do have some nice stuff there but when I got there, I could not remember what they said I should try. I saw “bubur kuali” at the 2nd stall and I thought that was fried porridge. I’ve seen people blogging about it but I have not seen it being sold anywhere here so of course, I wanted to try.  Unfortunately, the lady said it was not available and luckily too as actually, it was not what I thought it was – as a matter of fact, it was our very popular local Foochow delight, the dianmianngu, which I do not really fancy. Duh!!! Is that what they call it in Malay?

I went back to the kampua mee stall… 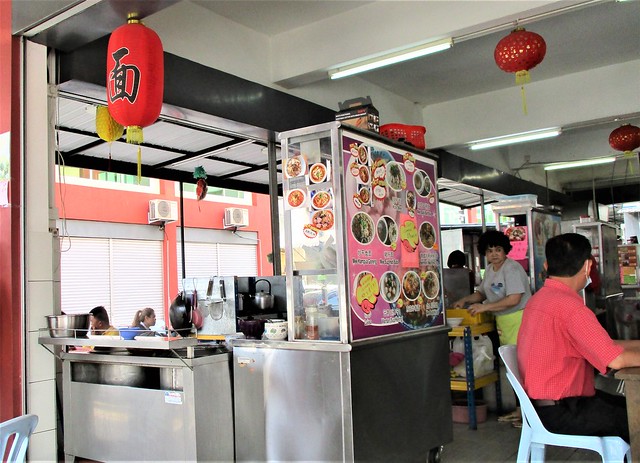 …in front and I thought the RM8.00 Sarawak laksa with the big prawns looked rather enticing but it was sold out, the laksa and good grief!!! I saw the photograph of the RM12.00 one and it had a whole lot of pork intestines and liver!!! That is sacrilegious! Absolutely ridiculous! I am sure whoever created this culinary delight, the pride and joy of Sarawak, would be turning in her grave to see what they have done to it here – yes, I’ve seen it at a number of stalls in some coffee shops here. What on earth are they thinking? Tsk! Tsk!

I ended up ordering their stewed pork ribs that was supposed to go with bihun or yellow noodles but I wanted kampua mee (RM6.00)… 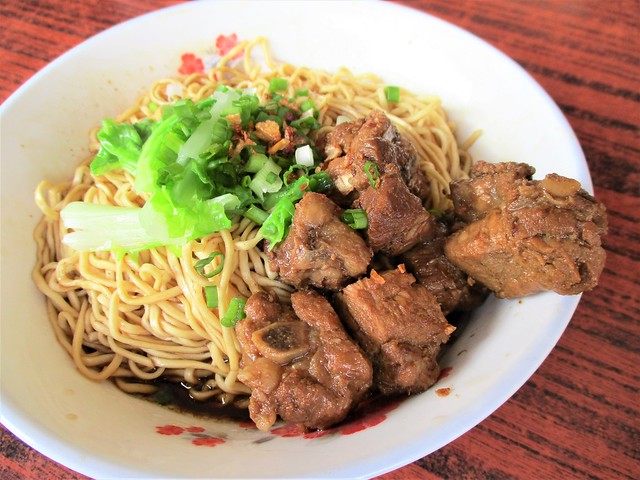 …instead. It did not cross my mind at the time to tell them that I wanted the kampua mee, plain and it turned out that the lady tossed the noodles in the stewed pork ribs sauce. In the end, it did not taste like kampua mee, not at all…but thankfully, it was quite nice and yes, the ribs were good.

However, if I were to compare, the pork rib noodles I had here was a whole lot nicer but unfortunately, that stall has since closed down – I think somebody else has taken over but no, I have not gone over to see what he/she has in store.

7 thoughts on “So blessed…”