When I was here last month and had the kampua mee special that wasn’t all that special – they just added a hard-boiled egg, I thought the guy at the other/new stall… 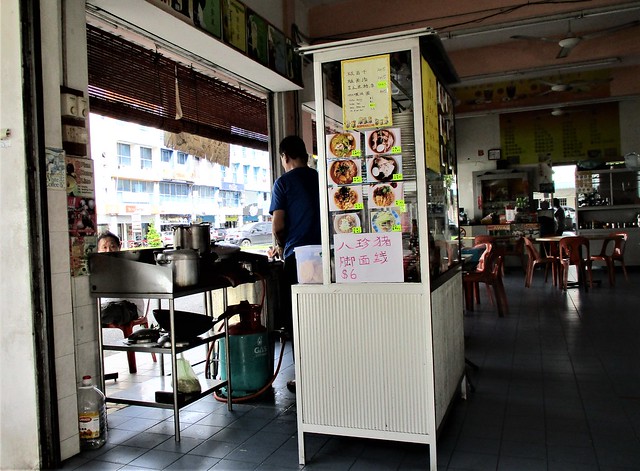 …looked very familiar. It was only when my friend/ex-student mentioned it to me that I remembered – he was the guy at the kampua mee stall here, the one with the very nice dongquai soup! I also went back for his Sarawak laksa and it was very good too.

I felt like having his pek ting eyok (Eight Treasures) but he said he did not have it that day and added that his pek ting eyok too kha (pork leg) would be available the following day at RM6.00 a bowl – that was the sign in Mandarin at the bottom in the photograph.

He also had bitter gourd noodles, curry mee, pan mee and zha jiang mian but I did feel like having those. In the end, I settled for the mee sua in traditional Foochow red wine chicken soup (RM5.00)… 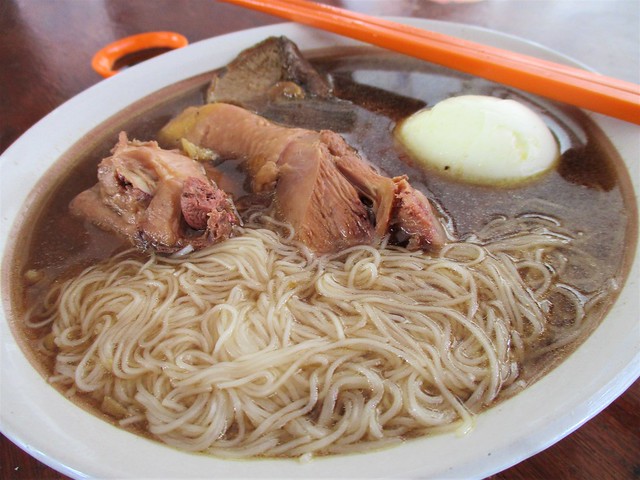 Let’s start with the good things first! Of course I was delighted that it did not come in those horribly-coloured plastic bowls and after the guy had served it, he came back and poured a lot more of the red wine, one cup, at least., into the soup. It was not red – it was translucent golden orange, one of those better quality ones.

I loved the meat used, that of those better quality chicken that they call pua chai kay (mixed breed chicken) – the meat is firm, tastes nicer and is a little bit sticky. I would love to buy this type of chicken when I cook but unfortunately, the people in the house are not fond of the hoo-mo-nik (breast meat) and I would have to struggle to finish eating all of it over the next few days. 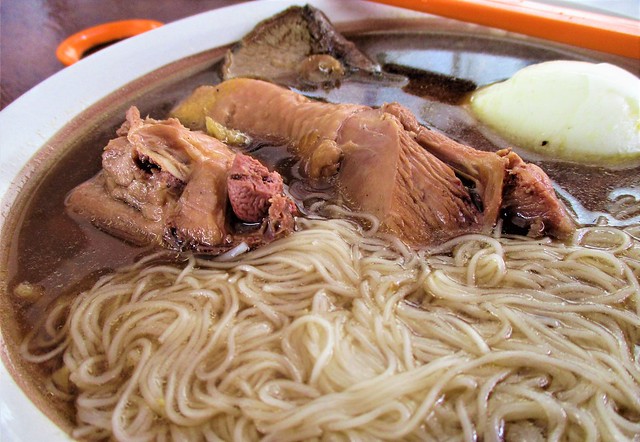 The guy did not add any wolfberries (nor red dates) to his soup so it lacked the sweetness of these two ingredients but yes, I did enjoy it very much, just that I had to pick out all the bits of ginger in it – I am not fond of biting into it in anything that I eat.

After I was done, I spoke to the nice guy and he told me that the owner of the former coffee shop took the place back – it now has a different name – and he told him to get out of the way as he wanted to run the kampua mee stall himself. According to the guy, he said that there is a lot of money to be earned in selling kampua mee…but every day, when I drive past, I do not see any customers eating there.

He cannot sell kampua mee (with or without the dongquai soup) and Sarawak laksa as the existing stall there is already selling those. No worries, seeing how he has quite a lot to pick from, I certainly would go back again another day to try something else from his stall.