I loved the mee pok ta (dry) in Singapore when I was there in 1973 by virtue of the fact that it was the closest thing to our Sibu kampua noodles or the Kuching kolo mee. No, they are not the same, all three of them, other than the fact that they are all tossed in their ingredients and served dry.

I did not know then but the Singapore one is also called bak chor mee, the obvious reason being the addition of bak chor (minced meat) to it, just as in Kuching kolo mee. The ones that I had then had fish balls and fish cake slices as well and a prawn or two and even two or three tiny bits of crunchy pork fat crusts.. I think there are places in Kuching where they serve the kolo mee like that, plus a few slices of char siew (barbecued pork) and some lightly-blanched green vegetables but the taste of the noodles is in a totally different class of its own and the texture is not the same.

Well, it so happened that my girl bought this made-in-Singapore instant mee pok dry… 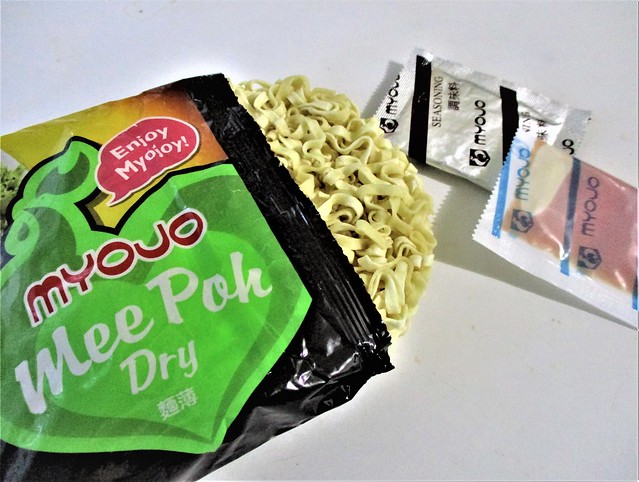 …and she loved it! Much nicer than our local ones, she said so I just had to try a bit of what she seemed to be enjoying so much. No, it did not impress me much – I thought it was rather strong in what I would refer to as the msg overload.

She finished the whole pack – I’m not sure if the mum had any or not but she went and bought another pack. That was when I decided to take a packet and try it again on my own. There are two sachets inside, one with the oil and the other with the seasoning in powder form. 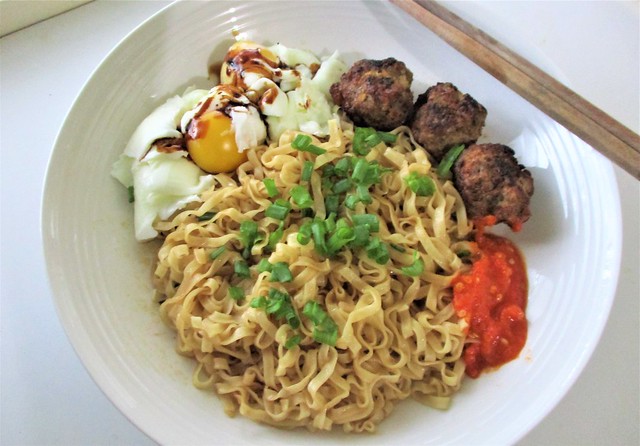 …garnished generously with a whole lot of chopped spring onion from my garden.

Actually I intended to have two half-boiled eggs but I was caught up with the cooking of the noodles and the heating up of the meatballs that I lost track of time and they ended up like that, overcooked! Had I known they would be so, I would have peeled the eggs nicely instead of breaking them into two and scooping everything out.

I tried the noodles… 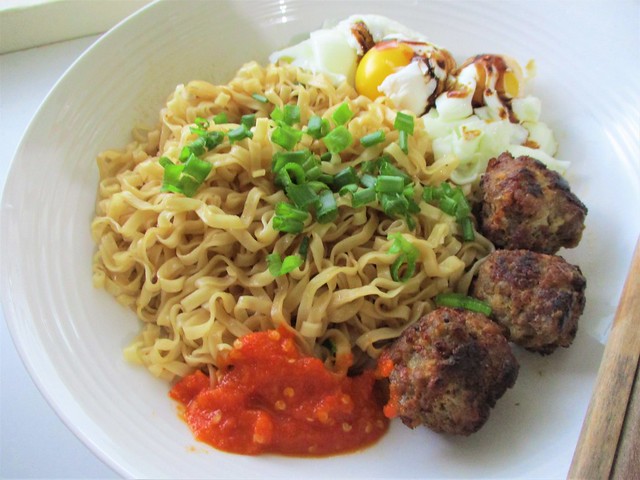 …and yes, they were very nice and had that vaguely familiar taste and texture of Singapore mee pok. The oil seemed to have a hint of sesame oil which I am not really that fond of – perhaps I shall use half of it…or use my own shallot oil next time.

I had the eggs with a bit of dark soy sauce and the meatballs with my missus’ own-made blended chili and garlic dip. The latter brought the taste of the noodles to a whole new level, very nice but of course, it was no longer the same as the ones I had in Singapore a long long time ago. Perhaps I should go and get the ingredients and cook it the exact same way as they did then, with minced meat and all – at least, they would look pretty much the same. LOL!!!