These are hard times. Many have not had any income for the last three months, many have been retrenched or have had their salaries cut but personally, I do feel there are ways by which one may earn a little bit to make one’s ends meet until the time comes when life is good again…hopefully!

There was this muscle-packed fitness instructor who went and worked for a vegetable seller and this flight steward from Sibu who used his time to make those lovely Sarawak ethnic traditional costumes for Barbie & Ken dolls and I saw on Facebook an Indian guy who set up a stall by the roadside to sell nasi lemak and there was also one guy who lost his job and went into Grab food delivery and of course, there are that Indian girl and her hubby, now Youtube celebrities and everything is going so well for them.

I am quite sure there are things one can do if one wants to do it instead of depending on charity, lining up all day in the sun and the rain for the government’s meagre handout. I pay the guy who comes once a month to cut my grass and sweep it all up RM50 each time and an extra RM50 on special occasions like Hari Raya or Christmas or Chinese New Year. There are many things to do in my garden and how much I will pay will depend on how hard the job is and how long it will take…if anyone is interested.

We are not being confined that much anymore these days but no, things are not getting any better, definitely nothing like those days before COVID-19. Business at the restaurants and coffee shops is obviously very quiet and very slow and if you remember, I did mention the other day that the people here have resorted to making steamed meat paos and sio bee (meat dumplings) and there is another restaurant where they are making curry puffs for sale to supplement their income.

Likewise, those at one of our favourite restaurants in town have set up a kampua noodles stall… 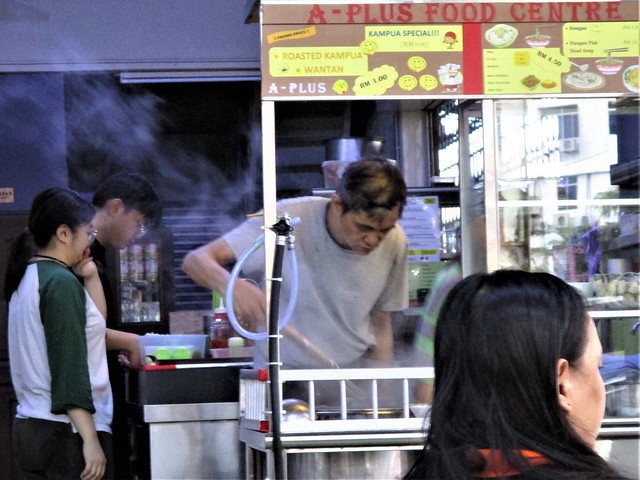 …in front of their shop with the boss doing all the cooking, the wife taking care of the drinks and the children doing the serving. My good friend/ex-classmate, Robert, shared a photo of the kampua mee pok he had here and the very next day, his cousin, meowsai_foodie on Instagram, shared his photographs on Facebook so I wasted no time at all in dropping by to check things out. 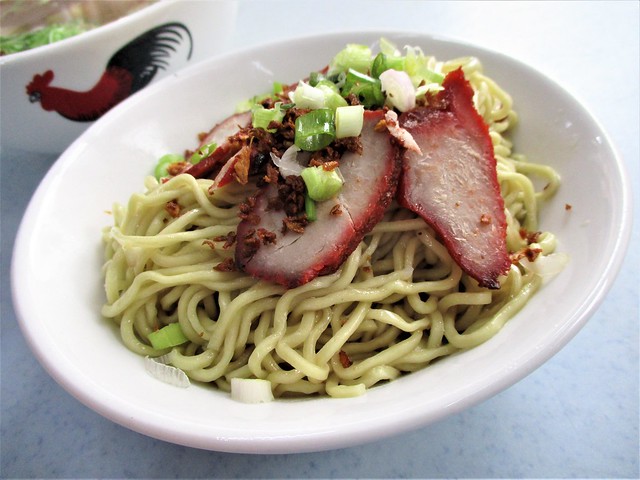 …was so very good, bursting with the fragrances of the fried shallots and fried garlic and the guy sure was very generous with those. He uses his special kampua noodles, different from all the rest as extra eggs are used in the making to make it more Q-Q (firmer). not unlike their own handmade noodles here.

Another plus point in this guy’s favour is how he uses real char siew (roasted/barbecued meat/pork) unlike most of the other places where they will give you boiled pork coloured red…and at one time, there was a ban on the artificial colouring used. 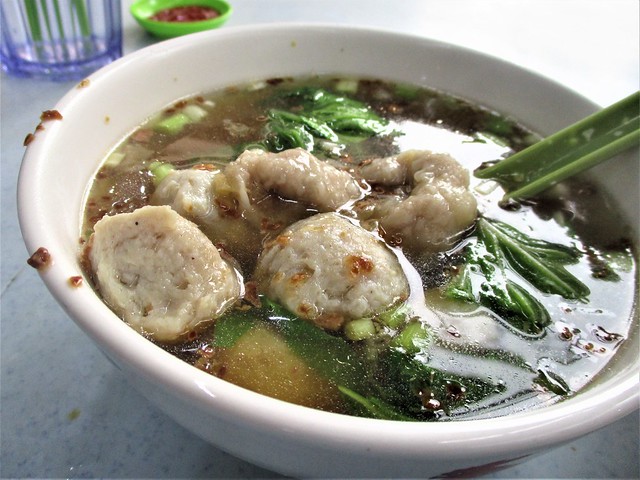 – if you ask for the special, you will get both the mee and the soup for RM6.00. Yes, it was very nice – the pian sip was great but I thought there was too much pepper in the fish balls and I am not exactly fond of that. The next time I have this, I shall ask for just the pian sip.

You can also order some fried noodle dishes and the boss will cook it for you. I had their Foochow fried noodles once but I did not like how the gravy was clear and even though it was nice, it wasn’t something I would want to order again. However, as I was leaving that morning, I saw him frying some mee in the hot wok and it looked really good – I asked him and he said it was the moon version. Now, I sure would want to try that the next time I come here. He also told me they are serving zhao chai hung ngang and that Foochow delight with ikan patin fish head. Well, I am neither crazy about the fish nor the dish so I’d probably opt for something else instead.

Incidentally, this kampua mee stall opens from 7.00 a.m. to 10.00 a.m. only, off days on Tuesdays, because from 10.30 a.m. onwards, they have economy fast food with 17 dishes to choose from in their buffet spread. We were here for that once and even though at that time, they did not have so many choices, we thought it was very nice and we sure enjoyed what we had. I guess they are going out full swing to attract more of the crowd on their lunchtime break to come here.

They open in the evening for dinner at 5.00 p.m., the boss said and I told him I was here a couple of times to tapao some food home but they were still closed and he said the workers will come at 5 and they will have to eat first before they open the doors and start work. I guess the early bird does not always catch the worm.

10 thoughts on “When life is good again…”