Lui pao is a coin purse in Hokkien, lui meaning money and pao is a bag or something along that line. Nui is egg in the dialect so nui pao is an egg purse.

When you go and eat noodles at a stall or shop, the seller may ask you if you want a nui pao to go with it. Unfortunately, what you will get in the end is one fried egg, sunny side up or if some oil is splashed on the yolk, there will not be any “sun” and of course, if it is flipped over, it is “sunny” no more.

To me, a nui pao is where you fold the egg white over the yolk, pushed strategically to one half of the circle so that in the end you will get a semi-circular wrapped-up fried egg that looks more like a purse… 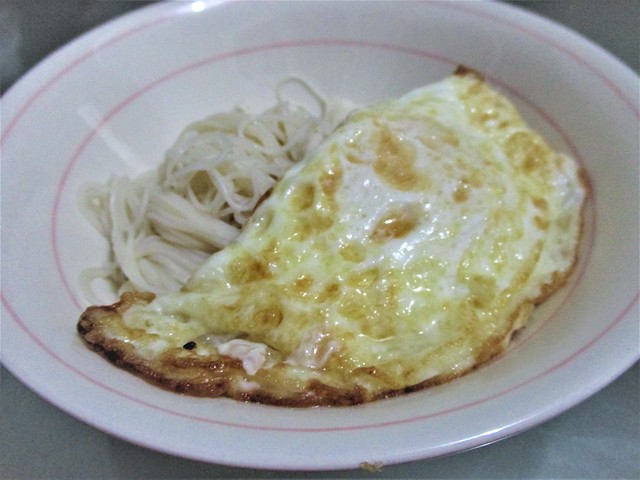 In our younger days, sometimes my father would bring a few fresh eggs (yes, way back then, we reared our own chickens for meat and for eggs) to buy Foochow noodles, soup, for the family to enjoy and we were immensely delighted to get to enjoy that special treat with the nui pao… 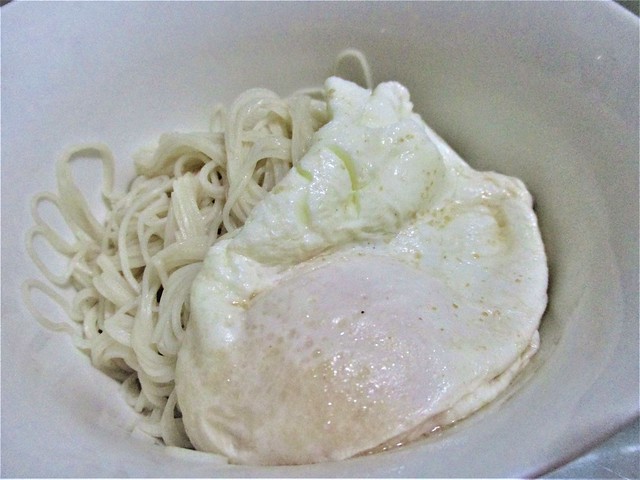 …but I never did find out how they went about it. Those poached eggs were perfectly done and no, there were no traces of the egg white swimming in the soup, none at all.

I know she would pound (she said these days, she would just use the grater) to mash the ginger so as to get the “hiam” (that strong pungent taste) out of the root but I am not really a fan of doing it like that because in the course of eating, I do not like biting into those bits of ginger. I would either take a chunk and bruise it or cut the ginger into thin slices. That morning, I opted for the latter.

I fried the ginger in some sesame oil before adding water and the traditional Foochow red wine. Then I put in one chicken stock cube and poached two eggs in the soup (I already cooked the aforementioned fried one earlier) and once done, I poured the soup over some mee sua that I had also cooked earlier and sat down to eat… 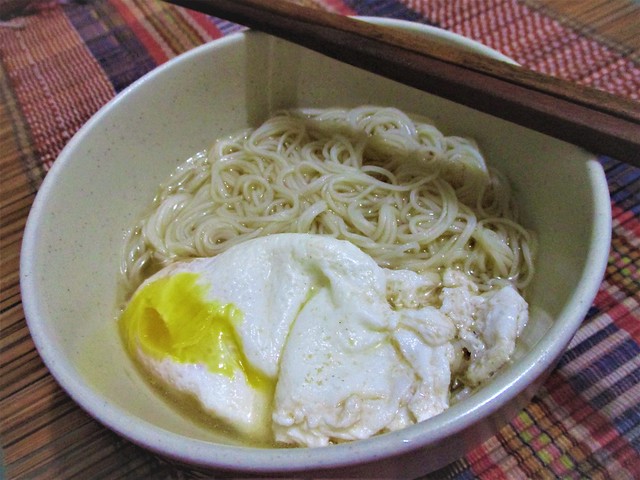 Of course, I made sure that the egg yolk was runny, just the way I would like it.

It was nice but nowhere half as nice as when my missus cooks it. As I have mentioned earlier, she prepares her ginger differently and she said she will fry the eggs in the sesame oil and leave them to cook in the soup. Maybe that would make some difference, I wouldn’t know.

Actually, I cooked this for the three of us for breakfast that morning because I wanted to try the traditional Foochow red wine that I had bought from Peter. He was not in when I dropped by the café so he called me the next morning advising me to check the wine to make sure it was good, otherwise I could take the bottles back to change. He said those had been there for so long, before the lockdown, so he was not sure which batch those came from. Well, the wine was excellent…just that my way of cooking was not up to my missus’ standard. Perhaps I can try again another day and the next time, I shall add the shitake mushrooms, the wolfberries and the red dates – the complete works!!!