The other day, I was feeling like having some char kway teow (fried flat rice noodles) and was thinking of going here to tapao the lady’s very nice Penang char kway teow or sambal kway teow to take home and enjoy.

However, that coffee shop was a little out of the way from where I was at that point in time and since I was driving past this place, I decided I would stop there to buy the Penang char kway teow from the stall there – my missus and my brother-in-law like it a lot and I’ve had it a few times and I feel it is pretty decent – best eaten there.

Unfortunately, the stall was not open. It was all packed up nicely and pushed to the side, shackled and looking like it had not open for a long long time. Usually, when it was not open, it was not open – the stall would be left standing there, empty, that was all. They would not go to the extent of doing all that. Perhaps the guy had gone back to Penang, I wouldn’t know.

Anyway, since I was already there, I decided to just go to the chu char (cook & fry) stall at the back of the adjoining coffee shop and tapao some stuff from there.

I tried the fried chao chai hung ngang (big bihun with preserved vegetables) here a long time ago but I wasn’t exactly thrilled by it. Still, when I heard that they served that at the next stall here, I was planning to go back there and try. Unfortunately, before I could get down to doing that, COVID-19 struck so to this day, I have yet to do so.

I placed my order for the fried noodles at the aforementioned stall but when I saw that they had fried chao chai hung ngang (RM5.00)… 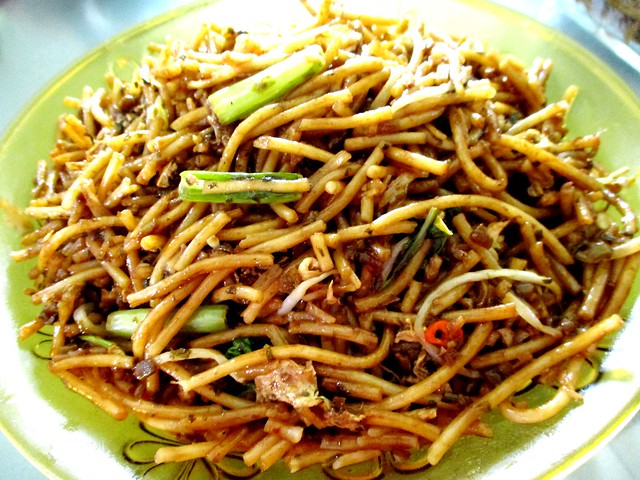 …I said that I wanted that too.

My girl had a bit of it and she said it was all right, not anything to get excited about and personally, she would much sooner go for the soup version. I tried it too and yes, I share those same sentiments about it. I guess it would pretty much be the same at all the stalls around town selling this – I doubt there is any that will get me jumping with delight.

In response to my post the other day, there were some comments on takeaways. Certain things are fine when you tapao it – chicken rice for instance, nasi lemak or nasi campur and all the rest from the Malay stalls and shops too but at Chinese chu-char places and restaurants, they usually coat the meat and seafood with flour and deep fry first and then they will cook the sauce and pour that all over it. By the time you get home, it would have gone all soggy and would not be all that palatable any longer. 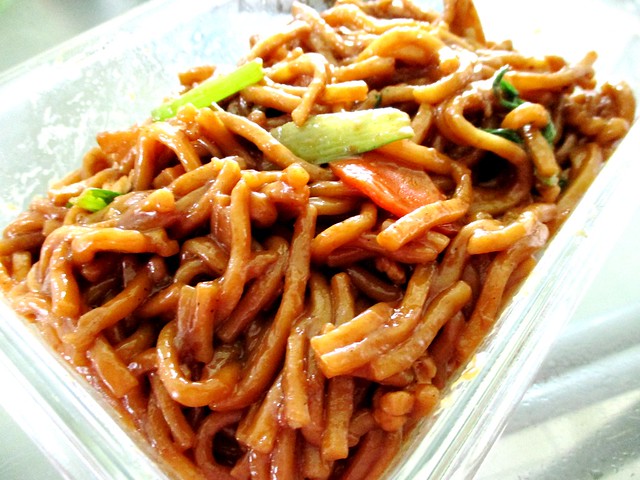 …I bought that morning, as you can see, the noodles had all bloated up after soaking all the gravy/sauce. Our yellow noodles is alkaline-free and does not have that smell that puts off a lot of people but they are prone to turning soft and soggy in soups. It is not so bad fried with gravy/sauce added and actually, it varies from place to place – the ones at some places may even taste a whole lot nicer when you buy them home and this happens.

As for this one here, in my missus’ words, it was all right, no wok hei fragrance, not really nice but there are others elsewhere that are a lot worse.