Po’ in Hokkien means thin (nipis) as in a thin piece of paper, for example, not thin (kurus) as in describing a person. Mee po’, therefore, is a bowl of flat and very thin noodles.

I remember the ones I used to enjoy a lot in Singapore way back in 1973. The noodles were very thin, of course, a darker shade of yellow/orange in colour – probably due to the egg used in the making or the alkaline added, chewy and almost translucent. You can click this link to go to my friend’s blog to see what looks quite like the mee po’ I used to have in the island republic. I wanted to “borrow” the photograph to share here but I have forgotten how to log into DISQUS and comment to seek his permission. For one thing, it was the only thing they had there that was closest to Sibu kampua mee or Kuching kolo mee.

Anyway, fast forward to the other day when my Bintulu cousin posted a photograph of the spicy vinegar instant kampua she had on Facebook and a Kuching cousin commented that she had the mee pok and it was good. Somewhere along the line, for reasons unknown, mee po’ has evolved into mee pok and it so happened that my missus grabbed a pack of the latter when she went out shopping the other day… 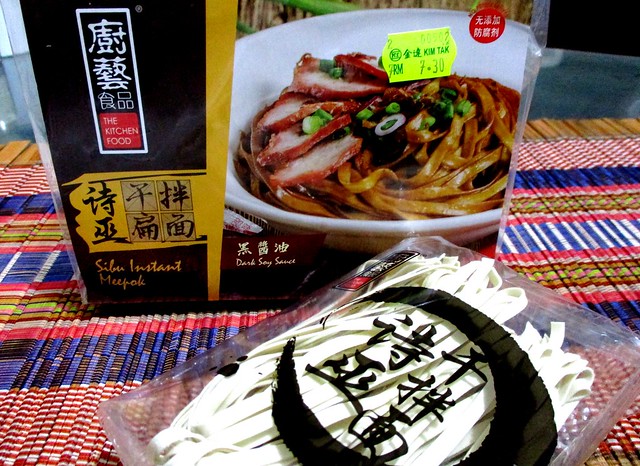 …so of course, I took a packet to try.

Like all their other products, there are two sachets inside… 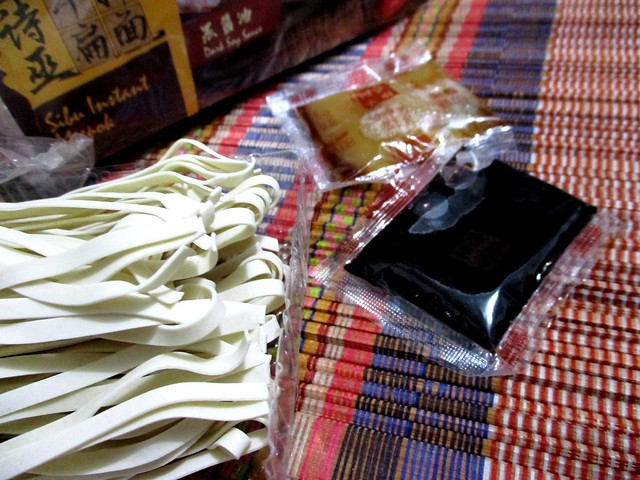 …one with the shallot oil (lard), the other with the soy sauce and in this case, it was the dark version.

As always, I emptied the contents of the sachets onto a plate and boiled the noodles and because they seemed rather thick unlike the thin round kampua mee, I let it simmer for a minute longer, around 3 altogether. Once done, I drained it well and tossed it with the ingredients provided. I had it with a few thin pan-fried slices of the leftover Aussie wagyu beef in the fridge from the soup that my missus cooked the day before… 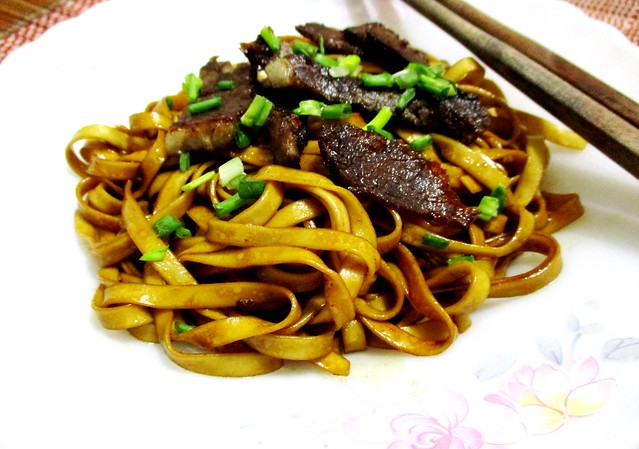 …garnished with a sprinkling of spring onions from my garden.

No, it wasn’t like the mee pok at the kampua mee stalls – those are thinner and they are actually kampua mee, flattened and renamed mee pok and of course, they are a far cry from the ones I had in Singapore. This one was thicker, more chewy and more like our old-time traditional  mee kua/mee sanggul though not exactly but closer to that than the kampua mee pok…and if you are waiting for my verdict, I would say, yes, it was nice. I enjoyed it!