The other day, I blogged about how my girl cooked pek koi (white rice cake) and after that, I noticed that there was a little bit left, sitting there on the kitchen counter looking at me day in and day out and of course, I had the urge to take what was left and cook it and be done with it. The problem was I did not know how to go about it.

I think I did try once a long long time ago and it was hard so I had to just get rid of it. Yes, I heard, since time immemorial, that the rice cake must be soaked overnight and I think I did that then. I hear that these days, there are brands that do not need soaking and I did not know if this was one of them or not. I went and googled – some said overnight, some said two hours, some said use warm water, one just poured it from the pack into the pan (I think she used a Korean brand) and one boiled it first.

In the end, I decided to just do it my way. I soaked it in boiling water… 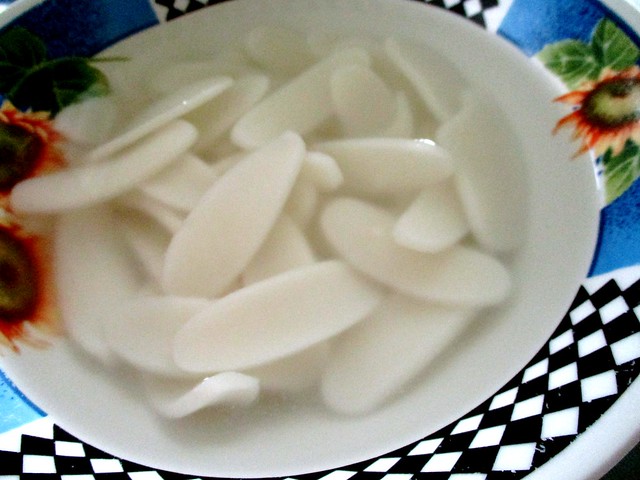 …for sometime but when I found that the slices had gone all sticky, though still hard and were sticking together, I changed the water quickly, using room temperature water this time around and I peeled the slices apart. I waited and nothing seemed to be happening…and I changed the water a few times. Eventually they did seem softer so I drained away the water and repeated the boiling water routine another time.

My girl fried hers with those canned clams in soy sauce like how I would fry bihun sometimes – some of the shops do it that way too so I decided I would do it differently even though I still have 5 cans of the clams in the pantry.

I drained the pek koi well and tossed it in dark soy sauce, adding a sprinkling of sugar to counter-balance the saltiness. I also got the other ingredients… 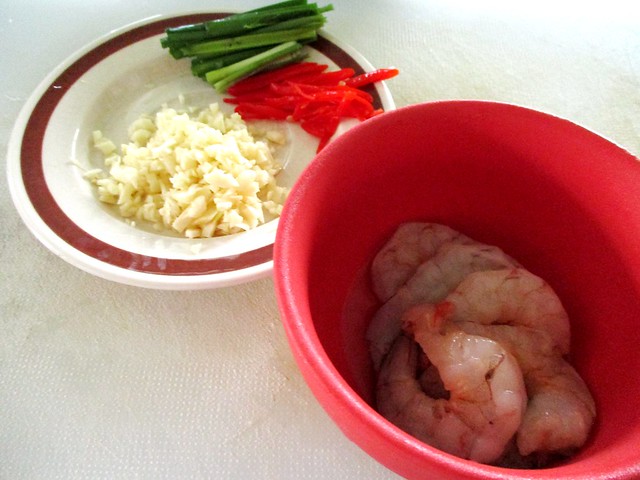 …ready – some prawns, six cloves of garlic, peeled and finely chopped, one chili, seeds removed and thinly sliced and some chives that I found in the fridge, cut into short strips. Later I decided to add a bit of my girl’s skinny wild onions and I cut them into short strips like the chives too and I was ready to roll!

I fried the garlic in oil till golden brown before adding the chili and the prawns. Once the prawns were cooked, I threw in the chives and the wild onions and then, I added the pek koi. Once I felt it had been fried enough, I broke an egg into the pan and mixed everything together well.

After stirring for a bit, I dished everything out onto a plate… 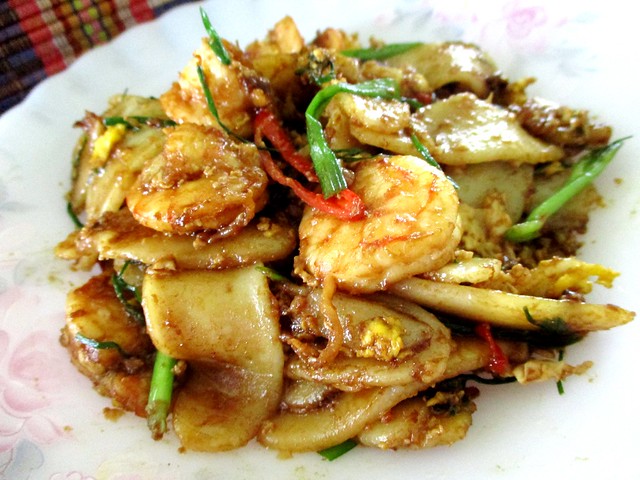 There wasn’t all that much left – enough for one serving so I decided not to eat it and saved it for my girl for her breakfast when she woke up that morning – she loves pek koi! Usually she does not eat that much in the morning but this was the exception to the rule – nothing left for me to pao boi (finish what’s left) when I came in after my gardening that morning.

I did try a couple of slices and yes, it was very very nice – nicer than at the shops and stalls and one thing I noticed was that after cooking, the pek koi had gone softer, just the right texture. I think I’ll grab another pack the next time I go out and I’ll give this one more try…but of course, I must soak it overnight the next time around!

Incidentally, I bought those prawns from the sellers by the side of the building where this hotel is located and they were really fresh, so very nice. They had two types, one Mukah prawns that looked a little smaller and were quite colourless, selling for RM35.00 a kilo and the other, bigger and reddish, at RM30.00 a kilo. They said those were “sea prawns” and for reasons unknown, they did not seem keen on getting me to buy those so I bought the Mukah ones and I sure was glad I did!