How many days has it been? I seem to have lost count already but I do know for a fact that there are 6 days left till the 14th – there will be an announcement, I hear, on the 10th so we shall know then whether there is going to be another extension or not.

I did drop by my neighbourhood shop the other day – I prefer to go there as usually, other than the workers, there isn’t anybody else…or maybe just one or two. I went to one of the main supermarkets in town that day and yes, they insisted that I sanitised my hands before entering (I know some fixed a sink and a water tap at the entrance for shoppers to wash their hands before going in) and yes, there were lines on the floor to make sure those queuing up to pay at the cashiers’ counters would stand one or two metres apart.

What I did not like was when I was inside, there were people walking here and there and everywhere and I felt very uneasy whenever any of them came close to me. Why can’t they keep their social distancing and stay at least 6 feet away? That pissed me off and that is why I would avoid going to the big ones.

When I go shopping, I would be like those people in one of those TV shows – run and grab everything and pay at the counter as fast as I could and get out of the place as soon as possible. I would sort things out when I get home and of course, there will be things that I do not intend to buy in the first place and on the other hand, there are things that I want to buy but in my rush, I have forgotten all about them.

One of the things I ended up having was a packet of the sambal for cooking Sarawak laksa and since I had that, last Sunday, I decided to cook it for our lunch and dinner, an all-in-one one bowl meal by itself.

Of course, I did not have everything I would need so I had to make do with what I had… 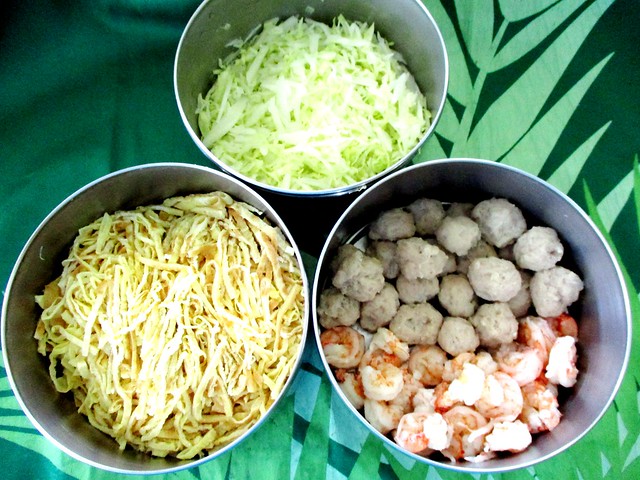 There were those shrimps that we usually keep in the freezer to use when frying vegetables and I made some fish balls using the Jakar fish paste – I did stock up a lot – and in place of the taugeh (bean sprouts), I had blanched cabbage, sliced very thinly. There wasn’t any chicken in the freezer but yes, we have a whole lot of eggs so I fried a whole lot of them and sliced the pieces of omelette thinly, just like the cabbage. 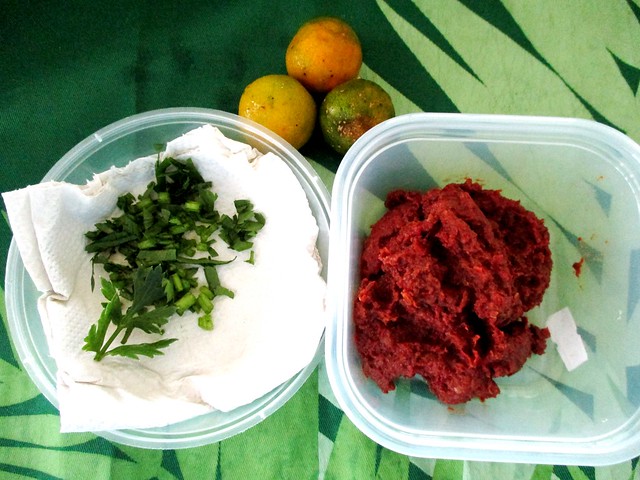 …but it turned out to be from Melaka! Thankfully, it was cheap and was actually quite nice. Our daun sup (Chinese parsley) has not been growing all that well, unlike before but I did manage to cut a couple of stalks for use. My missus did buy a lot of limau kasturi (calamansi lime) and kept them in the fridge but when I took them out, most of them were wrinkled, turning yellow and rotting away. Thankfully, I did manage to salvage a few that could still be used.

I prepared the stock from the shrimps and the fish balls and I found some chicken innards in the freezer – I will always tell the seller I do not want that but my missus would always bring them home and stuff them in the freezer, I don’t know what for, keeping them there for months…or maybe even years. I boiled all of them for the stock and later, buried them under my rambutan tree. I also boiled a handful of ikan bilis (dried anchovies) and with all those things that I had at hand, when I tried the stock, I found that it was actually very nice.

I added the laksa sambal and sieved it well once it was done before adding the santan (coconut milk) and bringing it back to boil. It was salty enough, probably from the fish balls and the ikan bilis, and yes, it sure turned out well… 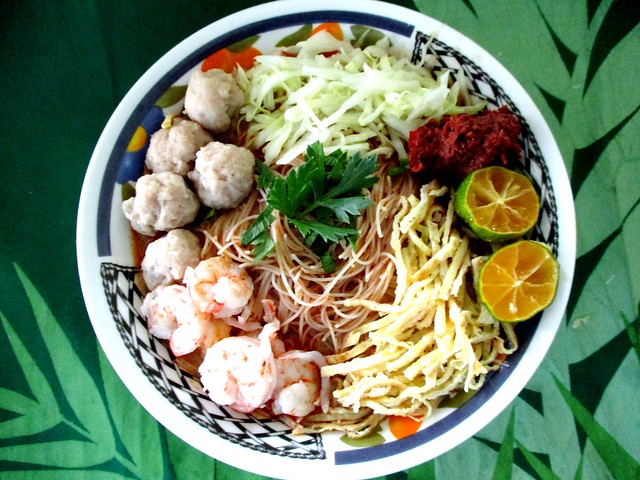 Everybody enjoyed it and I certainly was glad I grabbed that packet of laksa sambal despite having to make do without this and that which I did not have at hand.