This is Irene’s favourite… 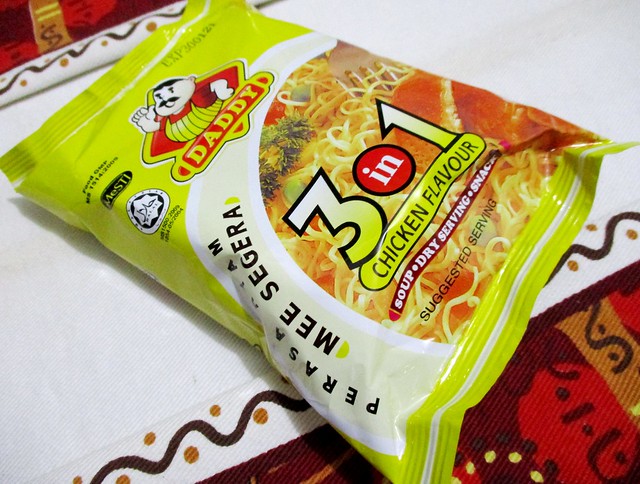 – our very own made-in-Sibu instant noodles, Daddy instant noodles – chicken flavour and yes, I do like it too except that it is a little bit more expensive than most of the other brands but I guess it is value for money since it is very nice. Their curry flavour is cheaper, more or less like the rest so usually, I would buy that. After all, at the end of the day, it is what it is – instant noodles.

The family pack of 18 packets is now RM15.50 so that works out to over 80 sen each, less than 90 sen. Of course, I never bought that, just the small pack of 5 sometimes but with the partial lockdown or the Restricted Movement/Movement Control Order, I grabbed one to keep in the house in case we run out of things to eat. Originally, it was supposed to end two days ago but unfortunately, it has been extended till the 14th of April.

Inside each packet, you have the noodles and two sachets – the seasoning and the shallot oil… 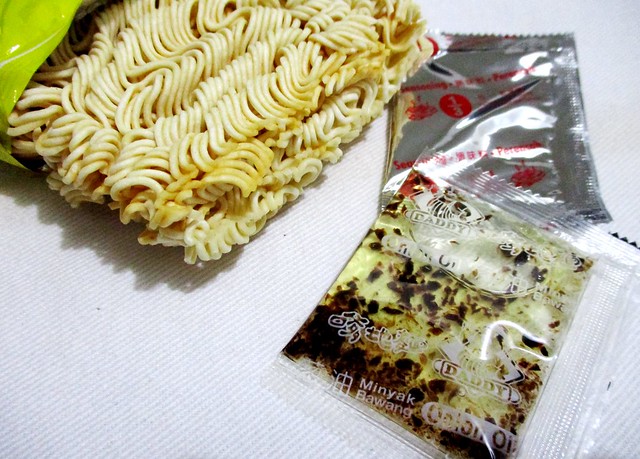 …and you may have noticed on the wrapper that this is supposed to be a 3-in-1. You can eat it as a snack, dry or soup. My guess is that because it can be eaten as a snack, the noodles are flavoured and hence, the yellow stains on it in the above photograph. Usually, when I cook instant noodles, I would cook the noodles first, drain away the water and cook the soup to pour over it. I find that I cannot do that with this brand because the flavour would be lost and the seasoning in the sachet is not able to save the day.

So what I did that day was I cooked a few fish balls (made using the Jakar fish paste) in some water before adding the noodles, the seasoning and the shallot oil. Once the noodles had softened, I broke an egg into the pot and covered it a while to allow it to cook. It is very easy to poach an egg when cooking instant noodles, unlike when cooking it on its own.

Once done, I poured everything into a bowl, added a bit of lightly blanched cabbage by the side and garnished it with chopped daun sup (Chinese celery)… 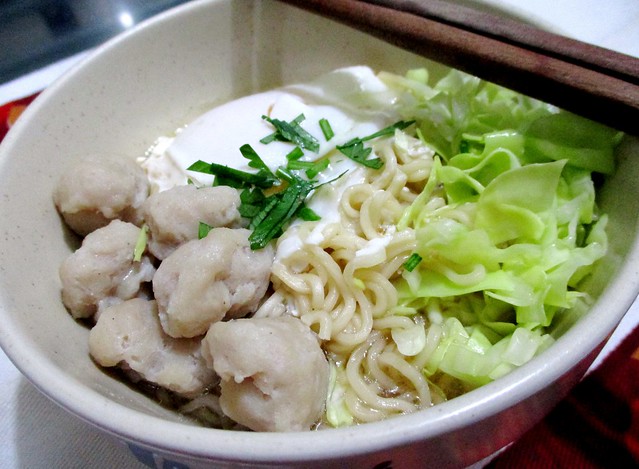 Of course, it was very nice but no, you will not see me eating it again unless the necessity arises – who knows when this lockdown is going to end! Let us pray that it will not drag on any further come the 14th.

10 thoughts on “Her favourite…”