Another two days and it would be the 31st of March, the day when the partial lockdown or the Movement Control/Restricted Movement Order was supposed to end but sadly, it has been extended for another two weeks till the 14th of April.

I am not that concerned about meat and fish as there is a whole lot of those available in cans once what we have in the freezer runs out and who knows, even if we can go out to buy, there is none for sale – there may not be anybody selling! However, when it comes to vegetables, there aren’t many choices that come in tins – sweet corn, processed peas, baked beans and we do not stock on a lot of the fresh ones either as most will not keep very long except for a few like cabbage, for instance.

I did blog about cooking cabbage a long time ago and and most of the time, people will just fry it with garlic and egg and add salt and msg. In that post of mine, I did add a bit of ikan bilis (dried anchovies) for the added flavour.

Well, the other day, I took a few leaves from the big one we had in the fridge to fry and as always, I cut the vegetable into long thin strips… 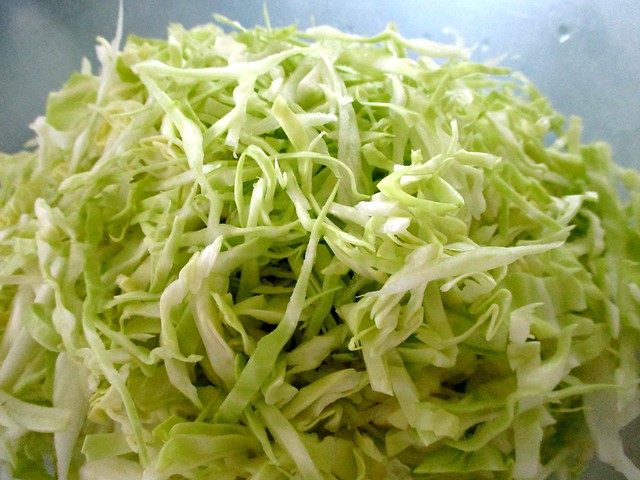 …and for the ingredients, I peeled and chopped three cloves of garlic and sliced half a lap chiang (Chinese sausage) very thinly… 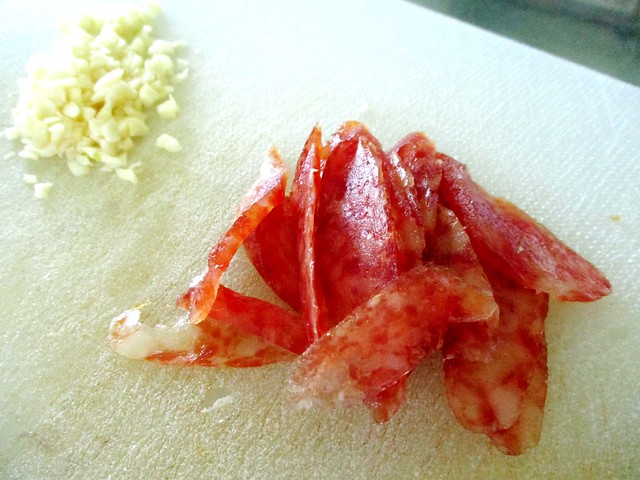 I had used half the other day to fry my gluten-free corn and vegetable shells char kway teow (fried flat rice noodles) style.

I fried the garlic in a bit of oil till golden brown before adding the lap chiang after which I broke an egg into the wok and scrambled it thoroughly before putting in the cabbage. Usually, after cutting, I would soak it in water and I would drain away the water just before it goes in. That way, there would be enough water to cook it already, no need to add anymore as that would render it soft and overcooked and not so nice. I added a bit of salt to it and once done, I dished it onto a plate… 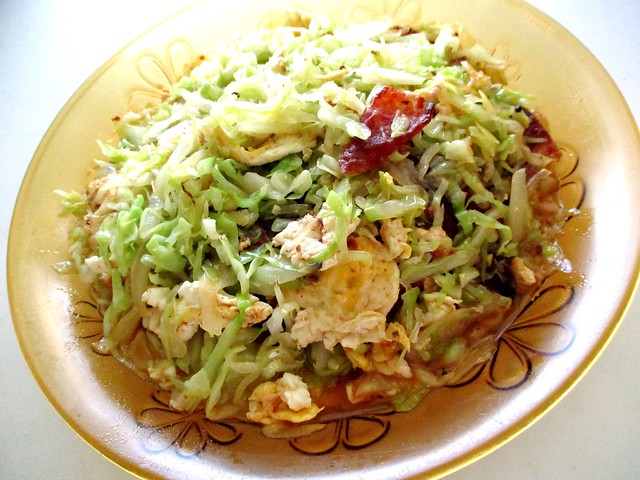 …and served. That certainly was quite a lot, enough for lunch and dinner.

We all enjoyed it and it makes me wonder as to why cabbage is not available in the Chinese restaurants here, not that I can remember – I don’t think I have seen it on the menu anywhere.