I’ve known the open house tradition for as long as I can remember.

We had it twice a year, at Christmas and soon after that, at Chinese New Year. My dad was a businessman and he had many friends and customers who would come round to enjoy my mum’s curry, served with bread and everyone loved her cakes and cookies too, not forgetting our very special “Singapore rambutans” which would always bear fruit around that time of year. This year, I was glad to be able to do the same with the rambutans from the sole-surviving tree at the back of my house.

In my childhood days, come Hari Raya Puasa/Aidilfitri, I would go with my Malay/Melanau friends from the neighbourhood to the houses in the kampungs in the vicinity. Their open house concept was a bit different then – they would welcome anybody and everybody dropping by and once at a house, the old folks would “interrogate” us, asking us whose children we were and so on and so forth. In the small kampung community, everybody knew everybody so nobody was a stranger. I remember those tiny glasses in which they would serve the drinks and also their long tables filled with all kinds of cakes in a myriad of colours – they did not use to serve food as in curry and rendang and what not back in those days.

Later, as I grew bigger/older, I remember what a lovely time I had with my friends in the 60’s, right through till the 70’s when we went on our bicycles to visit house after house after house, relatives and friends alike, from morning till night and my friends would come on their bicycles to my house too! What joy that brought us and how sad it is that the young ones these days don’t do this anymore, or not that I know of, that is!

Unlike my parents before, I no longer have open houses come Christmas every year but I would have it during Chinese New Year which is usually not long after that – this year, they were only a month apart. However, we had not had that for some two years now owing to the demise of my parents, first my dad and then my mum.

I do enjoy holding open houses but sad to say, I did not have a lot of friends visiting me this year. Other than the guys from Payung and my good friend, Lim, and his family, and not forgetting, the wonderful people, my friends, from the petrol station that I frequent here in Sibu, nobody else came.

Some of my girl’s colleagues from her former school dropped by too, a special thank you especially to those who drove all the way from there to town just to come and visit. A friend of hers, going all the way back to Primary One, came with her family and another good friend of hers, also a teacher, was here with two of her nieces. Her coursemate, the very nice guy from Terengganu, who was with her in Sg Petani and Wellington, New Zealand and is now teaching in Sibu, visited us too with his wife and son.

All the rest were my ex-students including one from my English tuition class who scored straight A’s in English (SPM & 1119) and is now an English teacher in her own right. Among my ex-students who came were these two… 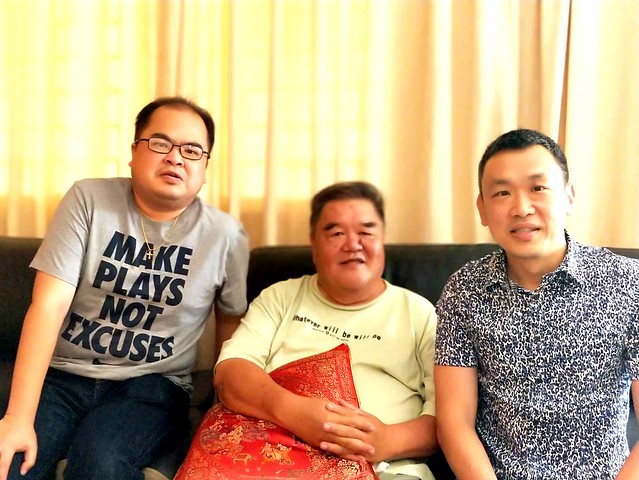 …and another one who came with his family the day before as he did not read the messages carefully and ended up coming earlier.

Another student, who dropped by my house when he and his family arrived home from Kuching to pass me some lovely dishes that he brought all the way, made it a point to come by as well. He said that he did meet some of his ex-classmates and the mere mention of my name would send shudders up their spine and they were reluctant to come and visit. Hmmm…and I thought I was always very nice when I was teaching them – I guess it was the size that all of them found intimidating. LOL!!!

Then there were two from another former school where I was teaching in the 90’s – they came with their children and these two brothers and a sister, also from that same school, came with theirs… 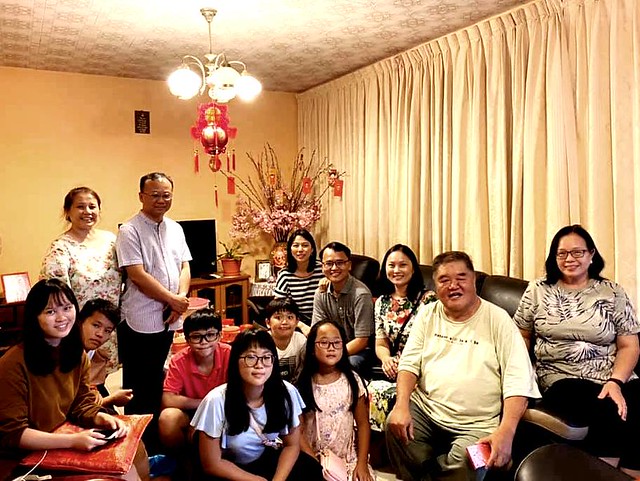 Of course, I prepared ang-paos for the children… 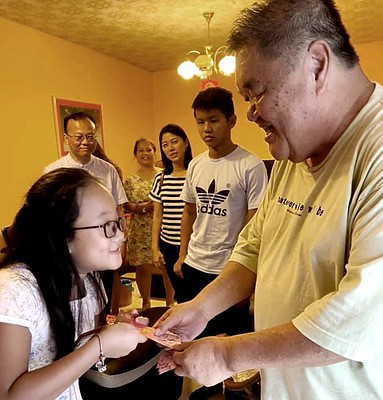 …and those eligible bachelors and spinsters, never mind how old they may be, for good luck and I must thank my friend at my regular bank who would always help reserve those new bank notes for me for the purpose.

And a very big thank you to the Headmistress, the Senior Assistants and my girl’s colleagues… 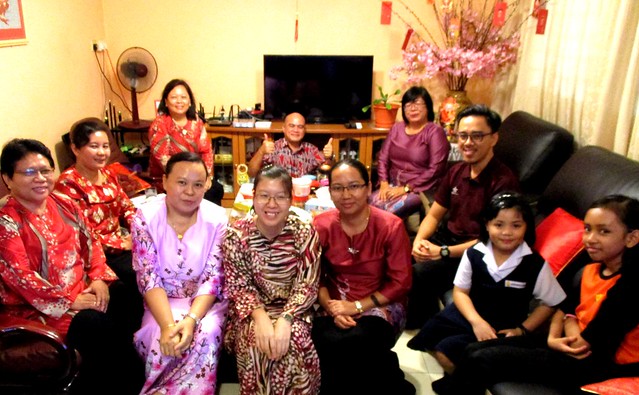 …from her current school who took the time to drop by as well, truly a lovely and special gesture that is most appreciated indeed.

In my neighbourhood, I only saw two houses that had visitors, probably just the members of the family. For some reason, the other houses in my lane were rather quiet. Perhaps like us in the past two years, they too had their reason, I wouldn’t know but what I do know for a fact was that many had their reunion dinner on the eve of Chinese New Year’s Eve so they could go some place the following day and would not be celebrating the festival here.

When I was in Singapore in 1973, I saw that they had their family reunion dinner and in the days that followed, they would just sit at the tables playing mahjong or whatever and I heard that this would be the usual practice in the peninsula too. Sad to say, it looks like the practice of holding open houses is gradually becoming a dying tradition.

Nonetheless, I, for one, would continue to observe and preserve our heritage and enjoy the bonding, all the good wishes and the positive vibes, all that joy and laughter shared with everyone who cares enough to stop by. Thank you once again to all who came this year and thanks to those who brought along a little something too…