I do not know about the other Chinese dialects and races but among the Foochows, it is considered good manners when somebody gives you something to say, “Nei ah! Nei ah!!!” (No need! No need!) What I do know is in western societies, it is not like that – if somebody gives you a gift, you are supposed to open it right away and sing praises of the gift and declare how much you love it – I guess you also do that out of good manners even though you do not like it. LOL!!!

Well, Eric, the guy behind The Kitchen Food Sibu Instant Kampua, once went and paid some money to a fine dining restaurant here and asked me to go and eat…and there was some change and the people there paid me the money as they did not want to keep it. That was because I was blogging about his noodles and sending them to friends near and far to help promote his venture and that was his way of expressing his appreciation, that nice guy.

The other day, I blogged about his new product, the Sarawak laksa ramen and I also helped publicise it on Facebook. He sent me an invitation to breakfast and I replied no, thank you. Then, I shared some promotion at a café here and he said, “Let’s go!” and once again, I said no.

I will always help promote my friends’ cafés and restaurants, products and events but no, I never expect anything in return though there are some very kind and generous people who will always give me stuff or treat me to something nice and even give me special discounts when I go and eat at their place.

Mine is not a money-spinning blog nor am I one of those who call themselves influencers – mine is just a personal lifestyle blog, a diary of sorts and I will blog about what I do, where I go to eat, things that are nice…or not so nice and so on and so forth and if something is not nice, I will say so, maybe a little subtly usually.

But this Eric would not take no for an answer. Finally, he said, “I’ll give you some fish!” I just assumed that he would be one of those who would go out to sea and fish as a hobby so I said, “Right here waiting!” Then, the other evening, he messaged me to ask for my address as he would want to give me some prawns. I asked if he caught them but he said no, he just received some fresh ones, most probably from Sabah, and in no time at all, he was at my house to pass me these… 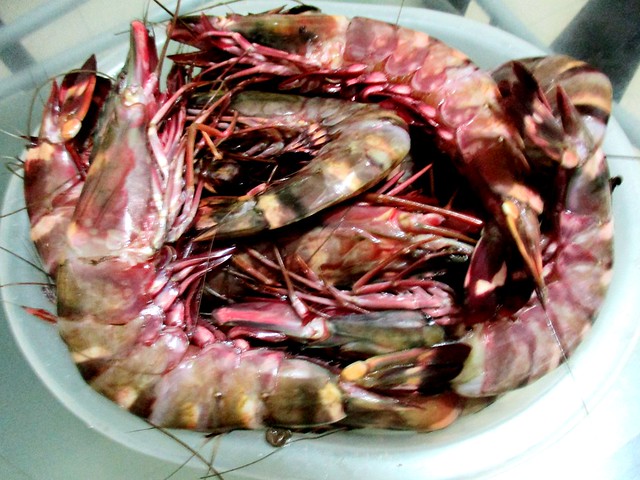 Good grief! Those tiger prawns were so big that just one would be enough for a bowl of laksa but this one… 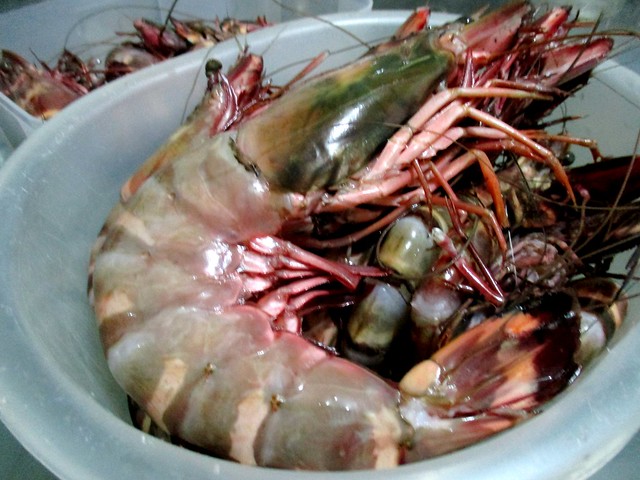 …is humongous!!! I don’t think I have a bowl that big!

Thank you so much, Eric…but no, don’t do that again! I will go on blogging about your products or anybody else’s for my own personal enjoyment – the pleasure is all mine but don’t send anything over, please. Nei ah! Nei ah!!!