This coffee shop in the next lane, round the corner from my house, is enjoying brisk business. I see a lot of people there every morning and if I am not wrong, it closes around noon and reopens in the evening but I hardly ever venture out once the sun has set and I have not passed by the place at night so I am not really sure.

I’ve been there a number of times and I like the fried stuff from the chu-char (cook & fry) place at the back and the kampua mee from the stall in front is pretty decent too. I was there not too long ago to tapao the Foochow fried noodles but the guy’s wife, a lady of ethnic descent, was doing the cooking. She said that the hubby was unwell and was at that point in time in hospital. Thankfully, when I went there again the other day, he was back in action, looking as fit as a fiddle.

I think the wife is Iban even though she is very fair and has the oriental look of those Kayan or Kenyah maidens. I heard the guy talking to the kids in Iban and Hokkien which I feel is a good thing. Many offsprings of such inter-marriages may end up speaking one language but not the other or worse, none of them, conversant only in Mandarin or English.

I ordered the fried kway teow (flat rice noodles), wet (with sauce/gravy), for a change and when it (RM4.00)… 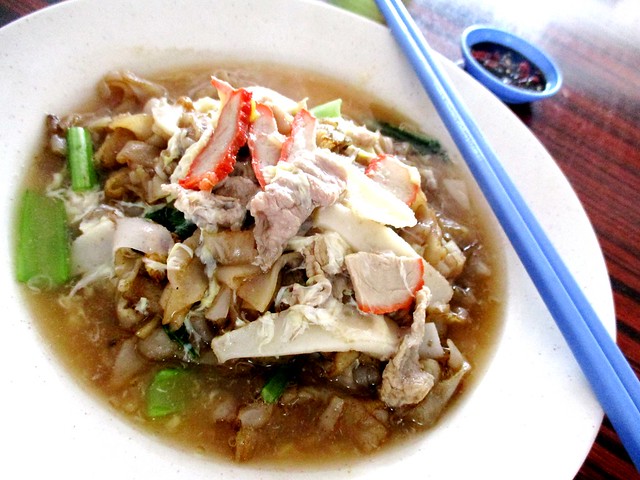 …was served, the first thing that crossed my mind was that it looked kind of pale which was unusually unusual, different from elsewhere where it would be a shade darker probably because of the amount of dark soy sauce added.

I tried it and was glad to find that it was very nice. It had that much coveted wok hei fragrance and the guy was very generous with the added ingredients… 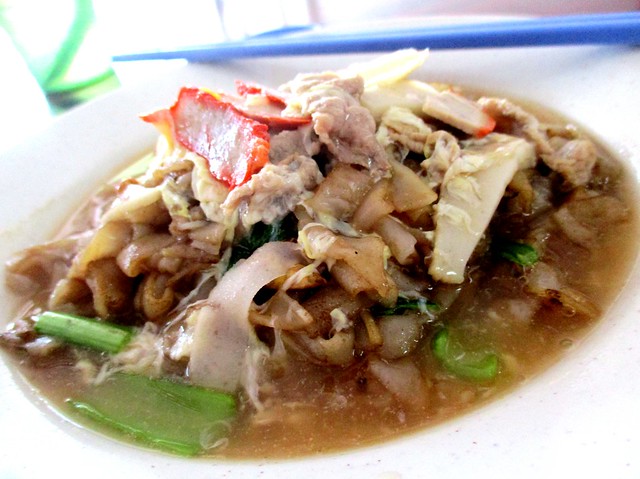 …unlike elsewhere where you will get bits of meat and green vegetables hardly visible to the naked eye for that same amount of money.

Of course, I would be dropping by time and time again as I do like what they dish out here and it is so very convenient, so near my house.