When I was still working, school started at 7.00 a.m. and by 6.00 a.m. or earlier, I would be on my way even though it would only take around 5-10 minutes for me to reach my destination. More often than not, the place would still be pitch dark and at times, it would still be all locked up when the caretaker/groundsman was running a little late.

Driving at that time of day was sheer delight as there would only be a sprinkling of other cars on the road, if any. These days, there are so many cars…and though I am thankful that there are no traffic jams (yet), what I simply cannot understand is why they have to drive so fast. There IS a speed limit here, 60 kmph in the town area…and they will weave in and out of traffic, changing lanes as and when it pleases them. People have the impression that cars here are not equipped with indicators as they will NEVER signal to let you know their intention when they turn left or right.

Frankly, I fail to understand what their hurry is – school does not start till after 7.00 a.m. and Sibu is such a small town that even before one song finishes on the radio, you would have reached your destination already! Maybe they are in a foul mood having to wake up so early to send their kids to school or maybe they are in rush to drop off their offspring and head back home to bed and sleep some more before it is time to go to work…or maybe there are a lot more cars these days and they have the tendency to drive in that unruly manner, I wouldn’t know.

Another impression that I get is that these days, people are real lazy. At that time of the morning, except for a few odd ones out, most of the coffee shops are not open yet.

I dropped by a hawker centre one morning and most were not open so I went to the market instead to see if I could buy some fish and prawns. On the way back, I saw one already open so I asked if I could order something for breakfast. They replied in a not-too-friendly manner (some people are simply not in a very good mood when they wake up in the morning) that they had just arrived and were not ready to start their business for the day yet – and that was past 6.30 a.m. going to be 7.00 a.m. soon.

In my younger days, coffee shops opened way before the crack of dawn and unlike many today, they did not close at or before noon either and if you wanted a plate of kampua mee at a very odd hour like 3 or 4.00 pm. they would only be too happy to restart their fire to cook the noodles for you and a plate was only 30 cents (without meat) or 50 cents (with meat) then. They must have worked so very hard and scrimped and saved to be able to afford their children’s fees and living expenses overseas unlike what some people think – that all of them were so very rich!

Well, I spotted one coffee shop that was open… 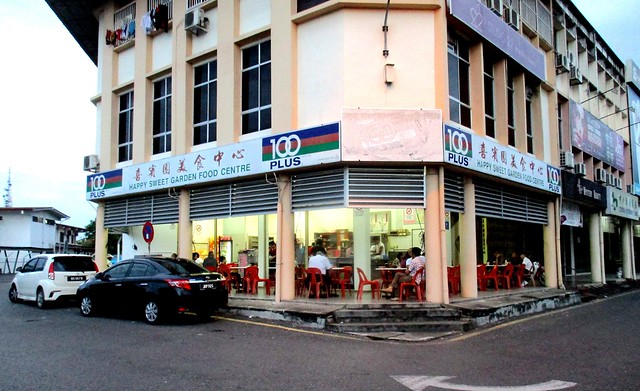 …the other morning so I decided to stop by for a plate of kampua noodles for breakfast. Now, this is another thing about drivers these days – there were ample parking spaces all around, no parking fee at that time of day but no, as you can see in the above photograph, they just had to park right beside the shop to go in and eat. I am quite sure they would drive right into the coffee shop if they could! Tsk! Tsk! I really wonder about the mentality of people nowadays and what has gone wrong along the way.

Now, if I am not wrong, that guy at the stall… 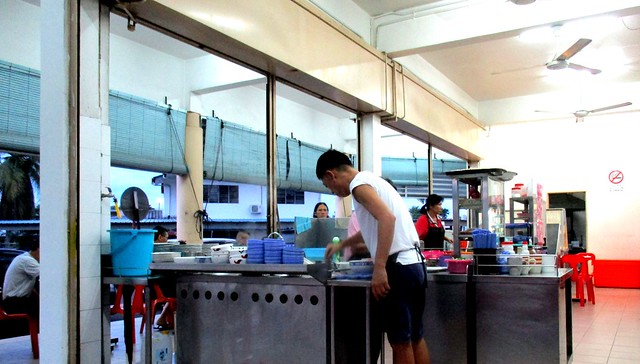 …is Ah Kow’s son. We grew up eating his father’s kampua noodles every Sunday after church, our weekly special treat, but only if my brother and I behaved well throughout the service or we would head straight home and have rotan (cane) for breakfast instead.

When I got to the coffee shop, I was amazed by the number of people there – it was almost full! It appeared to me that they were all parents bringing their children for breakfast before heading off to school. Is that why they drive so fast? They have to stop somewhere for a bite to eat first?

Golly gee! Don’t people cook and eat their own breakfast at home anymore? All throughout my schooling years, my mum would get up early to prepare breakfast and by the time we were up and ready for school, all would be ready and we could eat before getting on our bicycles and making our way to school by ourselves. For one thing, I cannot imagine those kids eating all the msg in the noodles every day and drinking those unhealthy drinks as well – no wonder we see news reports of young boys and girls getting ill, coming down with diabetes, cancer…heart problems and stroke even! It probably has something to do with the way of life these days. 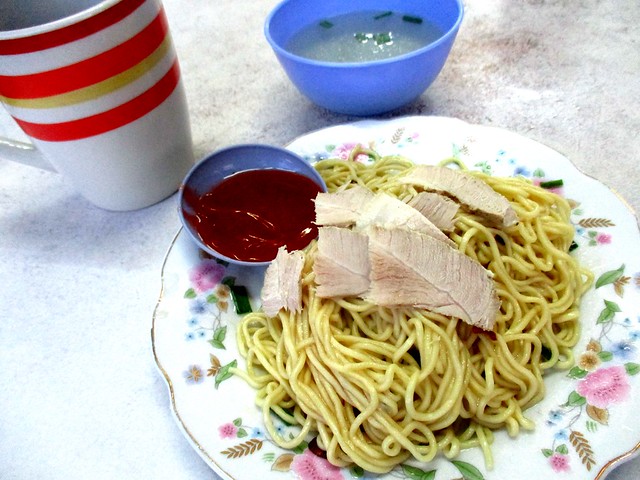 …that I had, it was pretty good, cheaper than many around here by 10 sen or 30 sen or more and I liked how they did not dye the meat red… 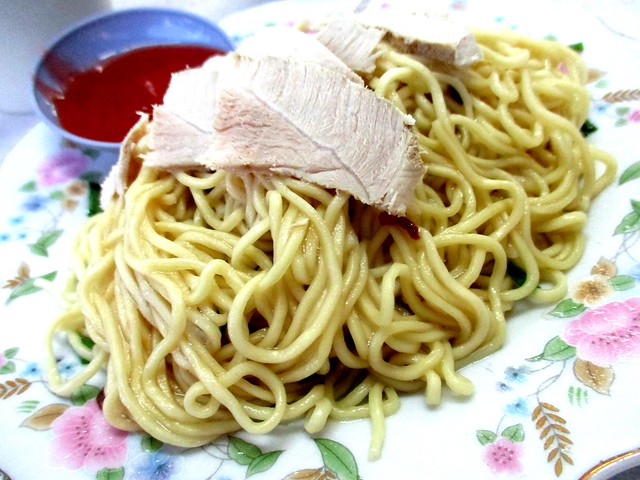 Well, since most other places are still closed, I guess if one wants kampua mee so early in the morning, this is one place they can head to.