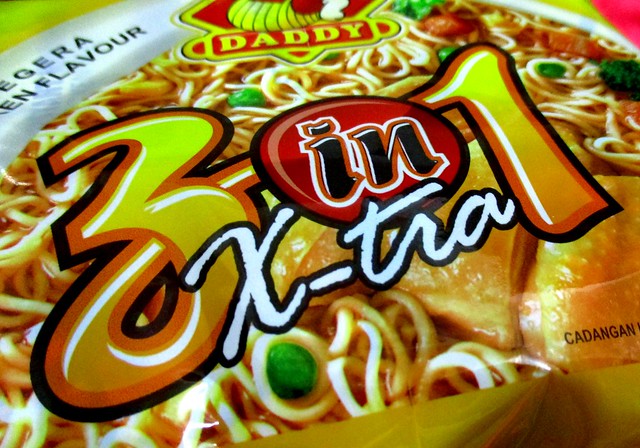 …was my late father’s favourite when he was still around. On some days, he would get the helper to cook him a bowl for breakfast and on some nights, he might cook it for his supper himself. I do like it a lot too but I am not very particular about which brand I eat and usually, I will just go for the cheaper ones.

For one thing, it is more expensive than most, if not all, of the rest, over RM4.00 for a pack of five while there are many others going for around RM3 something and I do know of some Indonesian ones selling for around RM2.80…and at times, there may be 6 in a pack even.

I’ve said it before and I’ll say it again – when there is no necessity for them to pay for transport and shipment, I cannot understand why, when it is made right here in Sibu…

…it cannot be a little cheaper. Is it because flour costs more here since we have to import that from elsewhere?

Anyway, I spotted the word x-tra on the packaging the other day and I was wondering what that was all about so I grabbed a pack and took it home. There is nothing on the packet to explain what that extra-something is and my guess is that there is more noodles in this one than in the regular packet. I do know for a fact that some people would need two packets – one will not be enough.

Of course, these days, when I cook instant noodles, I will boil the noodles first and then drain away the water and after that, I will rinse it well. In the meantime, I will boil some more water, empty the sachet(s) of seasoning and whatever into it and add the noodles before serving. I’ve read articles online about how they coat the noodles with wax or whatever and cooking it this way will remove it and render it less harmful to health.

Of course, there are a lot of other reasons why we should not consume instant noodles too often but looking at the shelves and shelves of these at the supermarkets, it sure looks like people simply do not give a damn. These days, the Korean ones, though a whole lot more expensive, are very popular.

Anyway, back to how I cook instant noodles, usually I would just use half of the seasoning which I am sure contains a lot of salt and msg and throw away the rest. However, with this brand, I would use all of it… …as I find that it is not as salty as the rest and I do not feel the msg overload all that much. There is also a sachet of onion oil (Oooppsss!!! I got it upside down in the photograph!) or shallot oil as I usually call it and of course, I would add all of it for the fragrance and the flavour and when I cook it the other morning, I also sprinkled a bit of chopped spring onion from my garden on top… 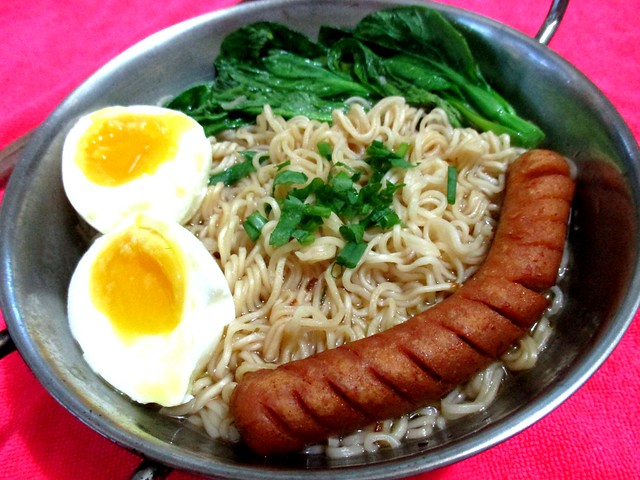 I had it with a lightly-grilled sausage and egg and some sawi manis so I would say that was quite  a balanced meal. don’t you think? There are carbohydrates, protein and vegetables – not all carbohydrates like when people just eat it on its own.

Whatever it is, it is best not to consume this way too often and in my case, I will just stock up some in the pantry for days when there is  nothing else to eat in the house.