I started my blog on the 7th of March, 2008 so that means it is now a little over 11 years old. I just do it for fun, just to keep a record of things going on in my life and to stay mentally active so I will not turn senile or suffer from dementia all that soon.

No, despite many people urging me to do so, I simply refused to monetise my blog – once you do it for the sake of money, it will lose its character and its charm and here, you do not get invited to events like food tasting, the opening of a new eatery in town or the launching of a new menu and the like, not that there are many/any.

For one thing, over the years, I have made a lot of friends from all over the world through blogging. There were many who were with me when I first started – most have fallen by the wayside, no longer active and only a couple remain. In the meantime, through the years, there were others who came and went and lately, not that many people will drop by every day, less than 1,000 but that does not deter me in any way. As long as I am enjoying it and there are still people who are interested around, I shall keep on doing what I’ve been doing for so long now.

I have a friend in Perth – I think he’s originally from these parts but he lives there now. I first met him in 2014 at one place that I used to frequent a lot before, when he came back for Chinese New Year and had gone there to enjoy the food. He came over and introduced himself and asked if he could have his photo taken with me. That sure was a pleasant surprise and of course, I could not say no. He was back again the following year, 2015 and we met on board the plane when I was on my way to Kuching, just fancy that.

He was back here again in 2016 and because I was always complaining about there being no fresh beef here, just the frozen imported ones, tough like leather, he brought me some all the way from Australia, believe it or not.

I did not hear from him anymore after that except for the not-very-frequent posts he would share on Facebook once in a long while and I sure was taken by surprise that day when he messaged me via Facebook saying, “I will be going back this Saturday. Have bought some goodies for you. Ok for me to pass to you on Sunday afternoon? I know you need to send your daughter to her school in the jungle.” I was puzzled, of course as I understood that he was here, going back to Perth on Saturday so how on earth would he be able to pass me the things on Sunday when he had already left town.

It turned out that he was in Perth, coming back here on Saturday and yes, he dropped by my place around 5.00 p.m. on Sunday like he said he would – I got his message right after I had got up from my nap, via Facebook to let me know he was coming. We would usually get home at around 3-4.00 p.m. after we have dropped off my girl at her school…and when he came, goodness gracious me!!! Wake me, somebody! Pinch me! I must be dreaming!!! This time around, he brought a big bag filled to the brim with all sorts of goodies from Australia just for me.

There were these biscuits and stuff… 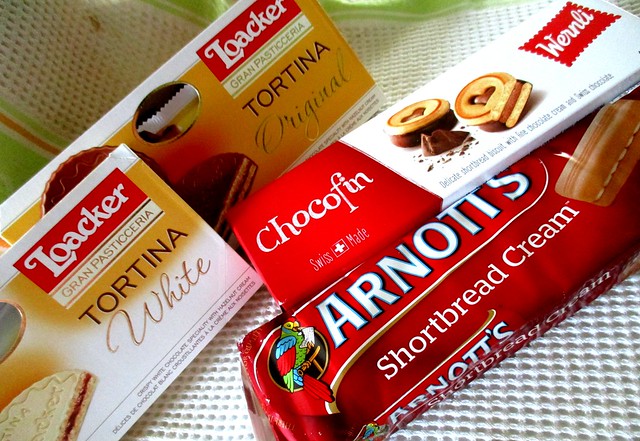 – I have tried the Arnotts Shortbread Cream and they were very nice. We do have that supermarket in town that will stock up on imported goods and we may get these from Arnotts but I will usually wait till the expiry date draws near when there may be some special promotion whereby these will be going at more affordable reduced prices.

This one’s for me… 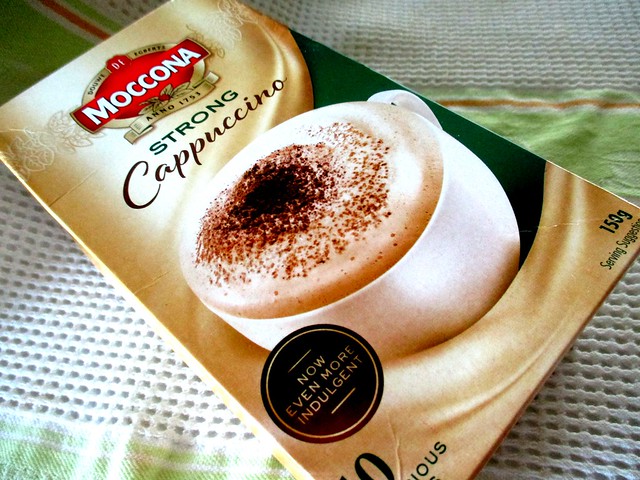 …now even more indulgent, indeed and I’m letting my girl have this… 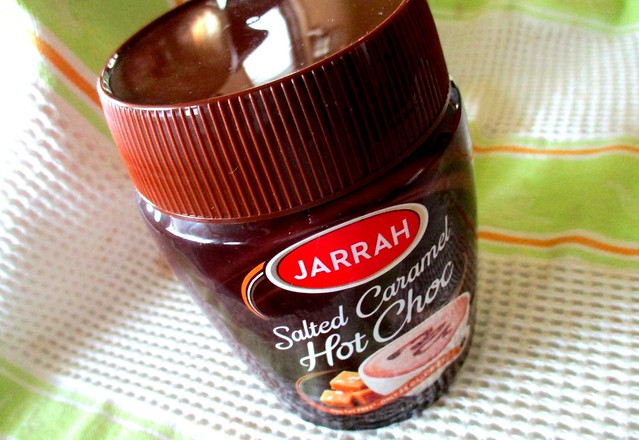 …for her night cap in her quarters. She usually buys Milo or chocolate milk and brings it along – now she can get to enjoy this.

I bet she would love these… 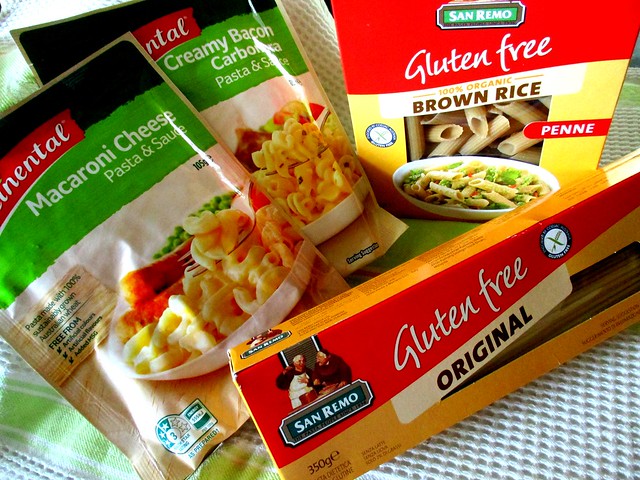 …too, the gluten-free pasta and those instant ones. Macaroni cheese, that’s her favourite! Incidentally, she went for a blood test, over RM1K and they had to send everything to KL to be done and the results came back after quite some time and it turned out that whatever allergies there were, it would be very minimal…so we reckoned it was an overdose of oats, breakfast, lunch, dinner and supper that triggered what looked like symptoms of gluten intolerance. Now she has gone back to eating the regular wheat stuff but I told her to do so slowly as she had been off those for around a year already, at least and the body would need to re-adapt to its re-introduction.

Anyway, back to what my friend brought me, there was this… 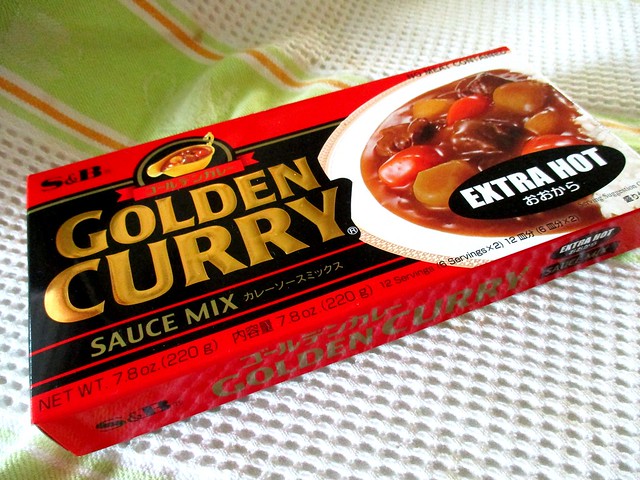 …too and I sure can’t wait to try cooking that. It sure looks like Japanese curry, that photo on the box – I’d probably use lamb or the very thinly-sliced beef, the one they use for their steamboats or hotpots…and there were these cans of SPAM too… 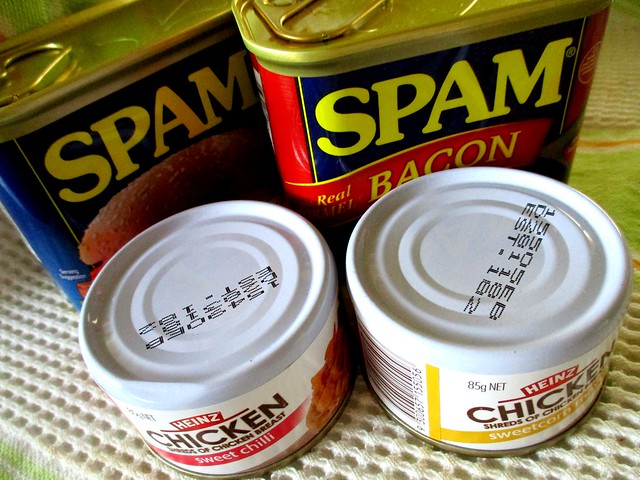 …and chicken – I know Hienz, we get their baked beans here.

I did not have anything in the house to give in return except for a packet of the Sarikei Jakar sio bee (meat dumplings) and I thought that would do, not expecting my friend to bring SO MANY things! I actually felt quite embarrassed to give him that but I did not have a choice since I did not have much else at that point in time. Thank you so much, my friend, for carting all that stuff all the way to give to me – that was so kind and generous and so thoughtful of you but please, next time, a little something will do…or some nice words like what you said that evening, “I read your blog every day!” That sure made me day, thank you!

9 thoughts on “Wake me I am dreaming…”