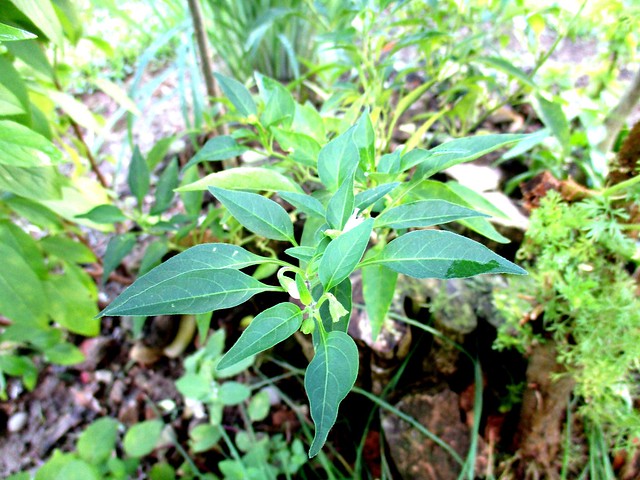 ….in my herbs circle, growing out from between the stumps of my jasmine tree that eventually called it a day. I cannot remember how it came to be – maybe I sowed some seeds and one out of many managed to make it.

I had another plant at another section of my garden amongst my Thai basil leaves. That one was not very productive; there were a few chilies, very few and some ripened. Some started rotting and dropped off and eventually, I transplanted it here as well but so far, it does not seem to be doing so well yet. Hopefully, things will change for the better.

Going back to this one, despite the size, it certainly is more productive but I’ve had my share of problems with it. The first round, there were just a few chilies, maybe 3 or 4 and they ripened and turned nicely red so I harvested them. My missus ate them all and yes, they were really nice, she said, very spicy. The second round, there were lots of chilies but they all turned brown close to the stems and dropped off. I went and googled and saw that it could be due to over-watering or a lack of calcium.

The third round was good, lots of chilies and no untoward incident but this time, the fourth round, I noticed that they were starting to drop off but no, there was no rotting whatsoever. Maybe the weather is way too hot these days, I wouldn’t know. That was why I plucked all of them even though they were green, around 10 altogether.

I did not feel like pickling them in vinegar this time around – I decided to make some sambal ikan bilis (dried anchovies dip) with them instead. I soaked a handful of ikan bilis in hot water to soften it a little and also to rinse it clean.

In the meantime, I pounded the chilies with a few shallots plus a little bit of belacan (dried prawn paste), just a little bit, before adding the ikan bilis. I continued pounding a bit more – I did not want to mash up the ikan bilis and end up with a mushy sambal. Lastly, I squeezed some calamansi lime juice and added a little bit of sugar to balance the sourish taste plus a few curry leaves, torn into bits/shreds. Once I had mixed everything together well, it was done… 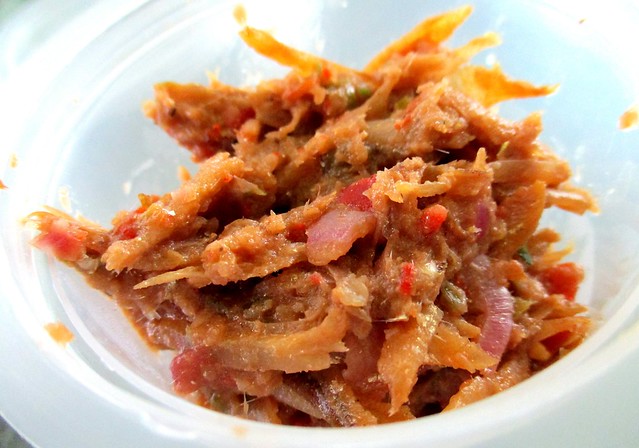 It turned out really nice, went really well with rice and I sure wouldn’t mind making some more soon…and as a matter of fact, I did! I made some more… 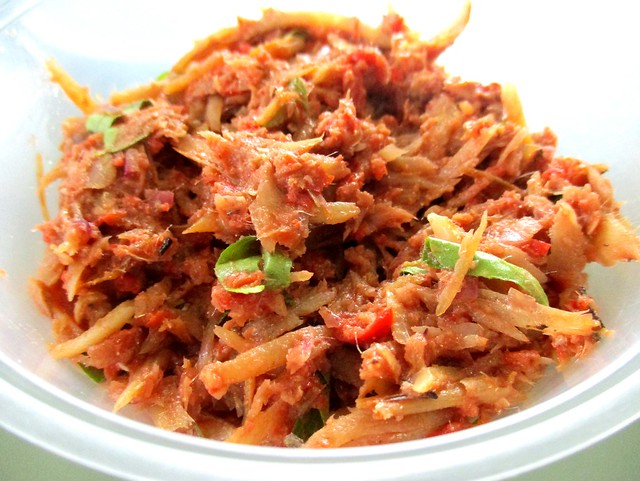 …yesterday and it’s Friday today which means that my girl will be coming home for the weekend. I hope she enjoys it.

Of course, it’s all up to you what you would like to use or add. I think I saw somewhere people using Bombay onions instead of shallots and some add garlic. I did add a bit of lengkuas (galangal) the second time around but I decided not to risk adding any serai (lemon grass) or kunyit (turmeric) or whatever else in case it did not turn out well – I’d probably try those next time.