Last Sunday, on our way to my girl’s school in the jungle, I ran over a massive pothole – some of them are not visible till you are already too near and it is already too late to slow down. I guess under such circumstances, it is not that safe to swerve or stop all of a sudden either. Because of the violent impact, the left side signal light fell off. I heard something so I quickly pulled up and went out to check. There was another car there, a fellow-victim, I guess and when he saw me looking all around the car to see if there was any damage, he shouted, “Lampu! Lampu depan!“

I had some duct tape that I used to stick some carton box in the boot so I pulled that off and used it to stick the lamp in place till we reached Selangau bazaar where we could buy some tape at one of the shops for the job, good enough for the rest of the ride to the school and all the way back home again.

Of course, early the very next morning, I made my way to my regular workshop in Sg Merah to get it fixed.  The nice employee there was keen on salvaging what was left of the lamp and started working on it but the plastic had become so brittle that it kept breaking and coming apart so when the boss showed up, he sent for a spare to be delivered.

The problem with this workshop is they do not stock up on spares so when any is needed, they will call somebody in town and wait for them to deliver…and at times, I had to wait a mighty long time. My guess is they will wait till they have a number of orders so it would be worth their while to go round all over town to deliver the items. Often, when I know something will take quite a bit of time, I will just ask them to come to my house to get the car and send it back when they’re done.

However, while waiting, you could always walk around and drop by the supermarket there to browse around perhaps. That morning, I spotted an unfamiliar Australian brand of fresh milk, “So Natural”, selling for RM3.67 a carton. I bought one to try but I did not think it was all that great, not really thick and rich…like another brand, Moo. My favourites would be Devondale or Meadow Fresh – in the case of the latter, the ones from New Zealand would be a bit cheaper but these would be around RM5.00 a carton, at times less and at times, more.

Another thing one could do around there would be to go to one coffee shop to eat and drink and sit and wait. This one would be the most convenient, directly opposite the workshop, just about 50 metres away or this Malay/Muslim coffee shop right behind it. This one where the kampua mee and the pian sip are a lot cheaper is around the corner, right down the lane.

The mee sapi (beef noodles) here has its following – it does seem to be quite popular but I did try once or twice and I was not impressed. It looked like they now have nasi campur and a whole lot of other things at that shop…and the Malay stalls at the coffee shop next door are still going strong…but the once-very-popular Chinese fried noodles at the back has called it a day owing to some problems in the family, so I’ve been told.  There is also an outlet of our very own Sarawak chicken rice franchise here if you are thus inclined.

Now, if you think that is a whole lot of coffee shops for you to pick and choose, there is another one… 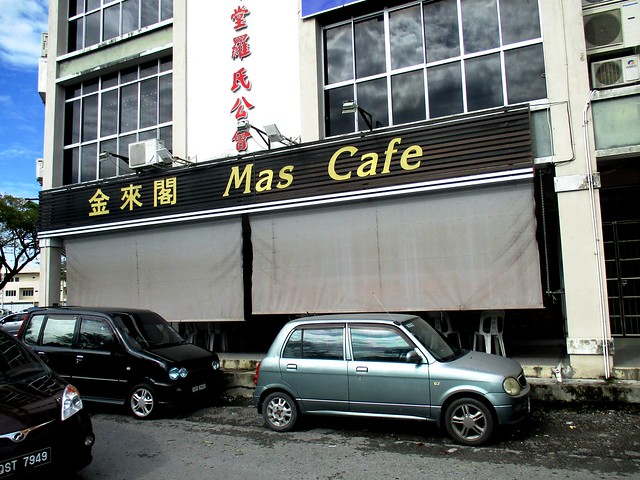 …that I had never gone to try before, right beside the branch of a bank there. Well, I’ve walked there before all right but it looked kind of deserted and the stalls were all closed – probably by some coincidence, I had caught them on a wrong day, their off day but seeing how it has been around for  a very long time, it should be doing well enough for it to stay open… 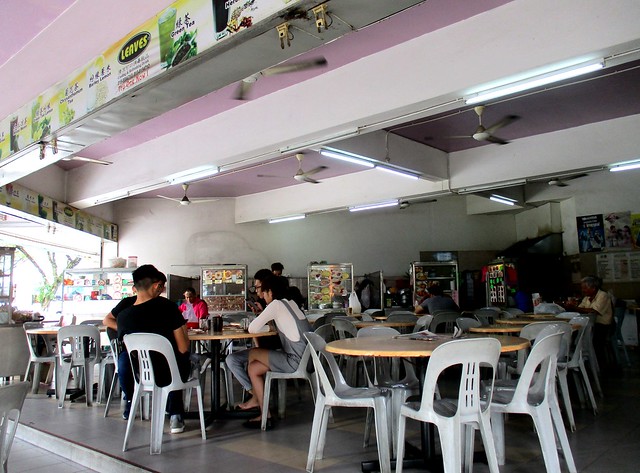 I would say it was a nice, clean place unlike some around town – the authorities concerned should do their work and go round and tell them off. It should not be just about making money – they should put in some effort to make their shop a bit more presentable so it will not spoil the appetite of intending customers who may have a change of heart at the sight of the condition of the shop and go some place else.

I saw that the kampua mee stall was open (and the stall next to it and later, I noticed some kind of life at another stall at the back too) and it had mee sua on the menu. From the look of the elderly lady running the stall, I was quite confident that she would know what she was doing and her mee sua would be good enough… 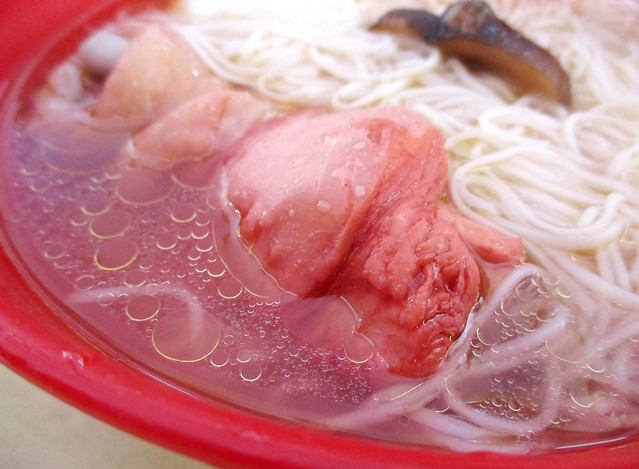 …and I was right in a way. The meat was well-marinated with the traditional Foochow red wine, hence the red colour but not horrifyingly so like at some places around here and there was enough ginger in the soup but other than the two tiny bits of Shitake mushroom, it did not have any wolfberries/goji berries in it and on the whole, it was more on the milder side, not so thick and rich like the ones we cook at home or the one that I love so much here.

I was thinking that my late parents would love this… 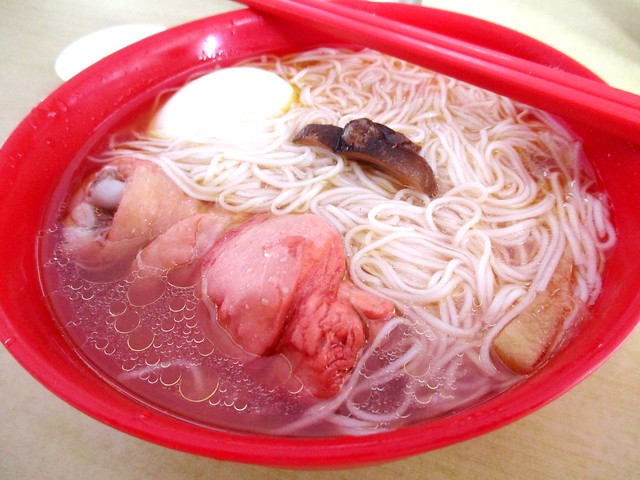 …a lot. Theirs was always lighter and milder and as a matter of fact, my girl liked it a lot that way – we would always go over on birthdays and new years to enjoy it the way they enjoyed it.

I was quite positive that I saw RM6.50 below the photograph on display at the stall so I gave the lady RM10.00 when she came to serve the noodles. After a while, she came back and gave me RM3.00 change and my guess is like everything else, the price had gone up. I did not say a word and went on enjoying the longevity noodles right down to the very last drop…though I can’t say I was all that comfortable with the use of the plastic bowl for serving anything in hot soup – I wish these people would not do that.