Ooopsss!!! I woke up that morning and found out that we had run out of eggs. There was some leftover rice and I was thinking I could fry that for breakfast but everytime I fry rice, I will add an egg or two so I had to abandon the idea.

I went out right away to the shops at the next lane to grab some. It is so convenient really; they’re right behind my neighbours’ houses opposite actually…and since I was there, bright and early – around 6 something in the morning, I decided to just drop by the coffee shop there for breakfast. That would save me the trouble of having to cook my own, if only for just one day.

I ordered the char mee, tam (fried noodles, wet/with gravy) from the chu char (cook and fry) place at the back and sat at a table to wait. It so happened that the guy who does the cooking just came back from the butcher and I heard him saying to somebody at another table that he had managed to get hold of some liver. Liver!!!??? Now, I would want that so I told him to add that to the fried noodles that I had ordered. 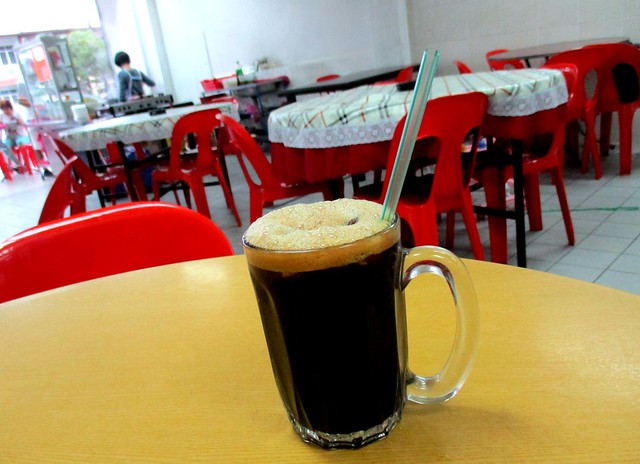 …was good and I was wondering why they had two of the tables covered with nice tablecloth, something quite unusual in a coffee shop. I was thinking that perhaps, one can have rice and dishes here in the evening but I did not bother to ask. 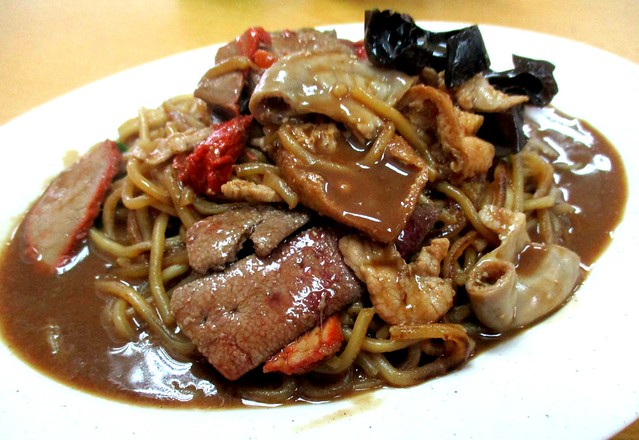 …and boy, I certainly was impressed. That looked really good with not only the liver but there were intestines too and a number of slices of char siew (barbecued pork) and everything else for only RM6.00, their special. Elsewhere, for RM4.00, you would get bits of meat so small that you would need a magnifying glass to detect them.

I was somewhat disappointed though that there was no sign of any green vegetables in the plate but when I went rummaging through the noodles, I did find a few bits here and there… 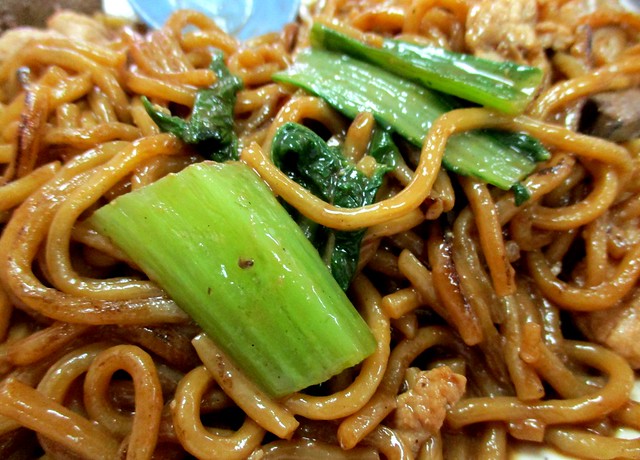 …but I certainly would ask for more the next time I drop by here to eat.

It appeared to me that the guy there now is not the same as the ladies who were there when we dropped by to give it a try that time when it first opened. What the latter dished out were good too but we had to wait a mighty long time and that was why we were not all that keen on going back there again. I did not have a problem with the one there now that morning though – what I ordered sure was served pretty fast, no problem at all.

So, was it any good? 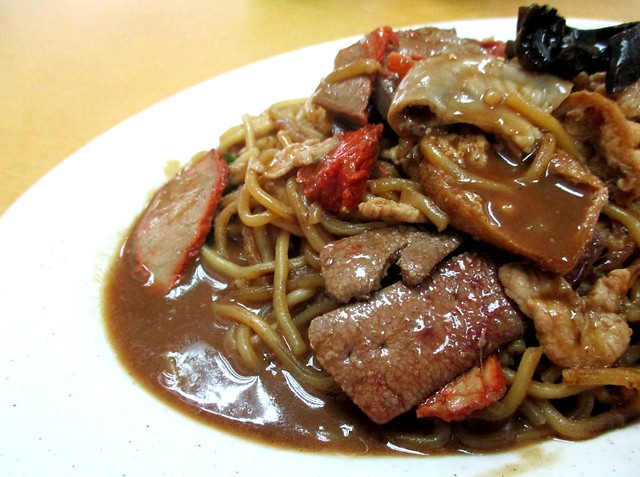 Well, I certainly thought so – in fact, I felt it was so good, so very generous with the ingredients and so cheap – it was RM7.00 a plate here and RM8.50 here (and I did not even think it was all that nice), dunno now – that I tapao-ed a plate home for my missus to enjoy for her breakfast.

From what I’ve noticed, the coffee shop seems to be enjoying brisk business – I see  a lot of people there very often but this area is not congested and parking is never a problem, plus it is free!