…the lazier I become.

These days, I feel so lazy to cook something nice for breakfast. I will just have my mug of coffee, Nescafe, no sugar – I am not bothered to go and brew something nicer and maybe have a few biscuits and then, I would go out to water the plants and do the gardening till mid-morning when it gets a bit too hot for me to continue. In the past, I would cook some fried rice or noodles or fry some bihun but the mere thought of it makes me tired already. LOL!!!

The other day, however, there was a lot of leftover rice in the fridge and some sambal belacan and some sambal ikan bilis so I decided to get them out of the way. I fried a handful of ikan bilis (dried anchovies) in a bit of oil, browned one shallot, peeled and sliced, three cloves of garlic, peeled and finely chopped and then threw in three chilies, seeds removed and thinly sliced, followed by the two sambals and then the rice and mixed everything together well. Next, I added two eggs, sprinkled a little bit of salt and thinly sliced Thai basil and spring onions from my garden and it was done… 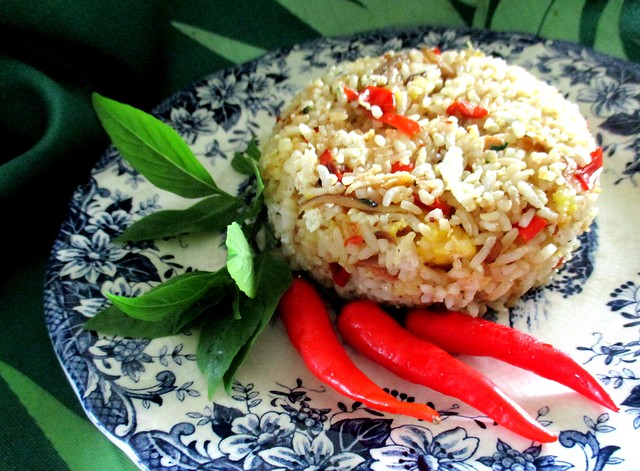 There was enough for the two of us for breakfast and dinner – we had lunch outside that day.

On other days, either my missus or I would go out and come home with some things we could have for breakfast. I would feel lazy to go out even these days so you would not see me venture all the way to the wet market (the Sibu Central Market) in the early morning.

Thankfully, there is this shop round the corner from my house… 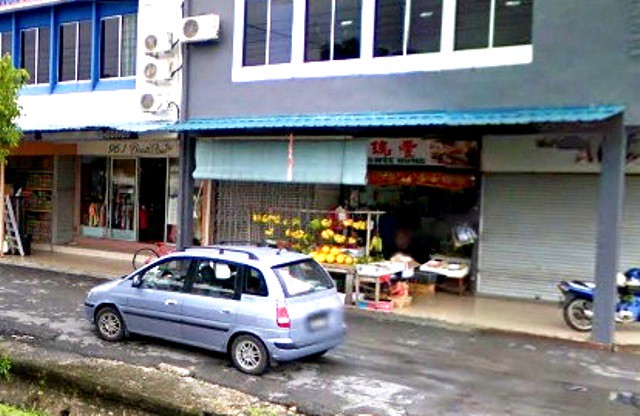 …in the next lane.

If I remember correctly, it started off as a fruit shop and it grew and grew. These days, in the early morning, it is a mini-market where one can get fresh meat and fish, fresh vegetables and even things like tofu and taugeh (bean sprouts) and they have a lot of things in their freezer too – as a matter of fact, I got the beef that day from there.

The boss would go to Sarikei every Tuesday, Thursday and Saturday and come back with a whole lot of things such as some very fresh sweet corn, pineapples and the juiciest and sweetest pomelo, the variety that they call mor-mor phow (hairy pomelo). I loved the Nestum-coated peanut butter mochi that he used to get from there but for reasons unknown, not anymore. There are also those lung ngor (egg cake) and bak koi (egg cake with minced meat and shallots) and the Foochow Mooncake Festival biscuits…and so on and so forth. A lot of the stuff that they sell are homemade – people make them at home and leave them there for sale.

I bought these yew char koi or yew tiao… 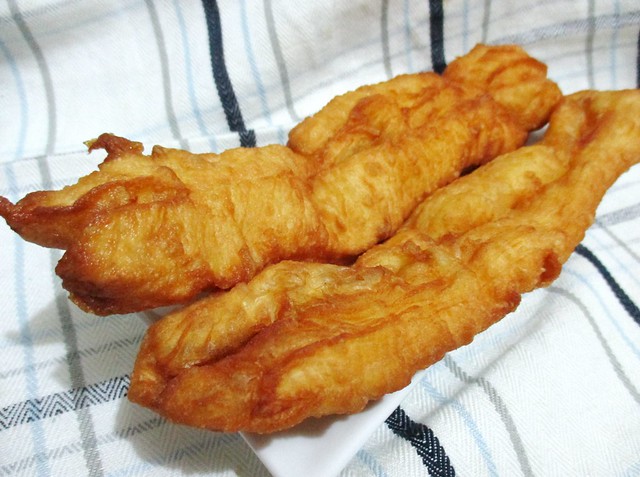 …there at 60 sen each but unfortunately, they were far from anything like what we used to enjoy before in my growing up years. They tasted all right with kaya (coconut jam)… 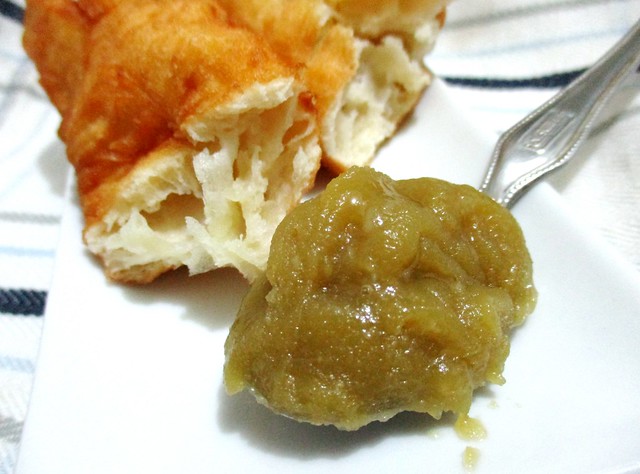 …but as you can see in the photograph, the texture was all wrong – they looked, to me, like some clogged artery.

The dough is supposed to be very small, finger size and they would use a piece of something like a cutter to make the dent in the middle, lengthwise. Once that is thrown into the hot oil, it will rise to the occasion and will be at least 12 inches long! Inside, there should be a lot of air spaces, crusty or crispy on the outside and soft on the inside. When we ate the thing, we would tear it along that aforementioned dent and it would come apart easily, not these ones that I bought the other day. Of course, I would not want to buy anymore the next time I see any at the shop.

On another day, my missus bought these chicken curry puffs… 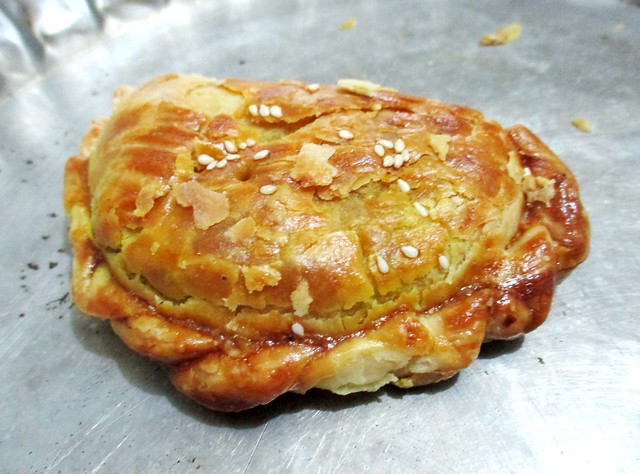 …and the next morning, I heated them up for breakfast.

I was delighted to see the chicken inside… 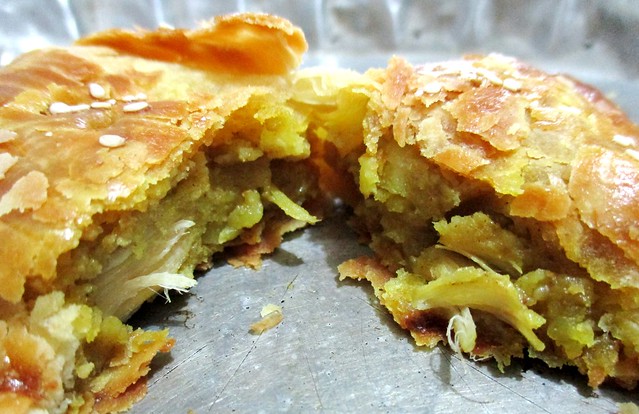 …when I cut it but my happiness was short-lived. That was all the meat there was inside – the rest of the filling was all potatoes. Yes, it was quite nice, that much I would say, but at RM2.50 each, I think I would much sooner go for a plate of kampua mee with a lot more meat than those miserable bits in the puff.

These were good though – the ma ngee or horse’s hoof… 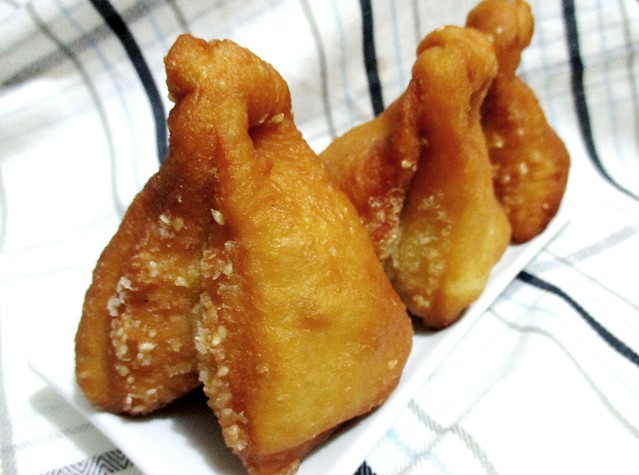 …that I bought from the shop, also selling for 60 sen each. I’ve tried others before – there were very small ones, others were hard or not quite the same or the texture was something like doughnut which should not be the case. They are two different things.

I certainly would keep going back to the shop as it is so very convenient and parking is easy and free and if I buy a lot of things, they will help carry all the stuff and put everything in the car…unlike when I go to the market in town and park my car far away and walk all the way there and back again with all my purchases, sweating from every pore.

SWEE HUNG (2.316161, 111.840441) is located along Jalan Ruby, in the block of shops on the right – next to a hair salon at the extreme end…and on the other end, to the left is the Kim Won Chinese Medical Store and Mini-supermarket. Kim Tak Co. and Ah Kau Cafe are located in the other block on the left.