The stall in the middle here… 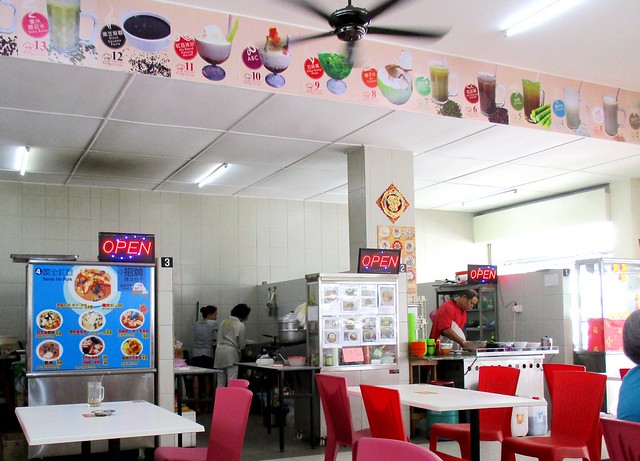 …is wrapping up its business and will close down by the end of the month. I did order a few things from there on our previous visit and of course, there wasn’t anything that would get us rushing back for more – that was why we had not been there since.

Well, it so happened that we heard of a place in the middle of that same block of shops where the jiew hu eng chai (sotong kangkong) was very nice so we dropped by to check it out. Unfortunately, it was a Wednesday and that was their off day. In the end, we decided to just hop over to this food court a few doors away to see if there were any new stalls.

The Muslim stall was still around but we did not like what we had the first time we were here and this time around, I did not see the chap fan (mixed rice) stall in front anymore – maybe they had stopped doing it but there was a chu char stall  in the midst of some of the other stalls. The roast meat stall to the right of the kampua mee stall in the above photograph was not open either – I don’t know if they had called it quits as well or it was their off day that day.

I decided I would order the noodles… 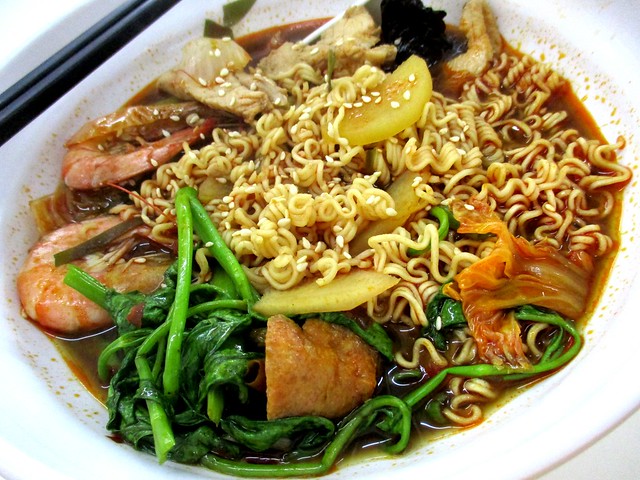 …from the aforementioned stall just to give them a little bit of support since they were about to close down. The lady did try to explain what it was actually but I could not make head or tail of what she was saying – I did hear Szechuan being mentioned…and I could understand that it would be spicy.

It turned out to be something like those Korean noodles, very spicy and a little sourish with a whole lot of things inside – two fish balls, fish cake, bits of cauliflower and a few sprigs of kangkong, intestines, pickled radish/white carrot, seaweed, a couple of pieces of chicken or was it pork, I wasn’t entirely sure…and two small prawns… 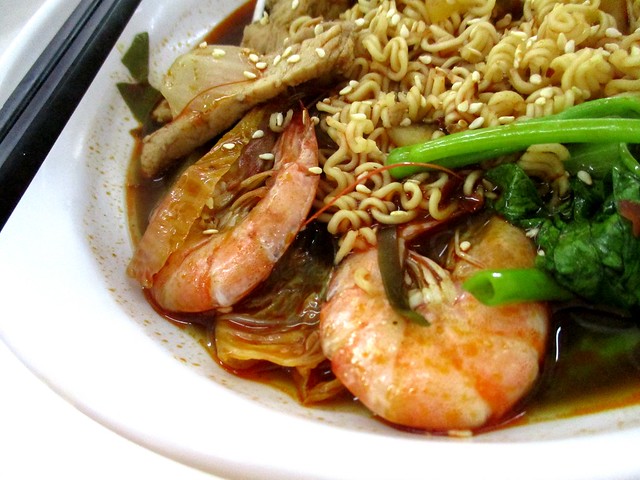 The two in the photograph at the stall were at least four or five times the size…and I grumbled that if they did not have the big ones, they should at least give more of those small ones. After all, that bowl of noodles and all they had in it did not come cheap, a whooping RM18.00, mind you!

It wasn’t too bad that it was so very expensive and it did not taste that great but it took so very long that I was running out of patience by the time it was served. No, I did not say a thing – after all, they were going to close down for good, no point hitting someone who is already down but no love lost! Good riddance! 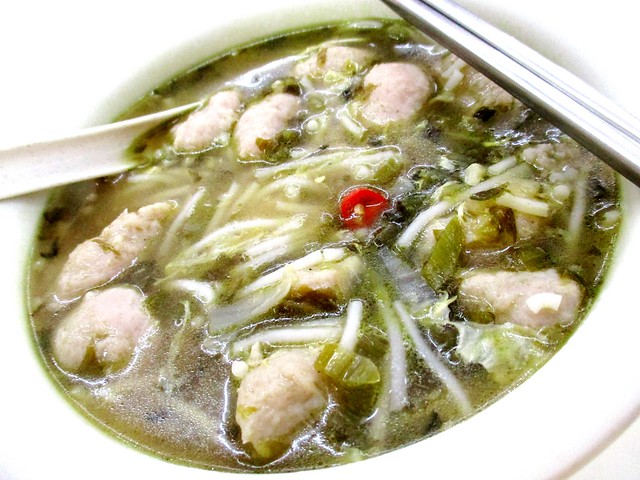 …from the stall from which I ordered the fish sio bee (dumplings) that last time we were here and though they were quite good, they were far from being overwhelming, nothing that I can’t do without.

My missus enjoyed her order – I could detect the fragrance of the chao chai (preserved vegetables) the moment it was served but I thought RM10.00 was a bit on the steep side. Perhaps they could reduce the number of fish balls and lower the price to say, RM8.00 to make it a little more affordable. I could think of a lot more things that I could enjoy a whole lot more for RM10.00…or even RM8.00, for that matter.

GRAND WONDERFUL FOOD COURT (2.309601, 111.845163) is located along Jalan Pipit, off Jalan Pedada or Jalan Pahlawan, on your left just before the Petronas petrol station a short distance from Delta Mall. You can also go in via Lorong Pipit 4, turning left into the lane at the junction where Starbucks Sibu is located and go straight ahead from there.

5 thoughts on “Calling it quits…”