My blogger-friend, Phong Hong, published a post recently on the masak hitam (literally translated, cooked black) that she cooked but it did not look quite the same. I checked the ingredients and they were nothing like what we would have in our Sarawak masak hitam – I don’t think they have curry and turmeric powder among the ingredients.

Of course, it would taste nice – with all those ingredients that went into the cooking, it couldn’t possibly be otherwise…like in the case of my failed attempt at cooking the dish from scratch – it did not look nor taste anything like it but yes, it tasted great. I had raisins in mine which is a crucial ingredient, it seems, and they said it was because I added santan (coconut milk) – there should not be any in the dish – and they also suggested using kicap manis(sweet dark soy sauce)  instead of the regular ones. 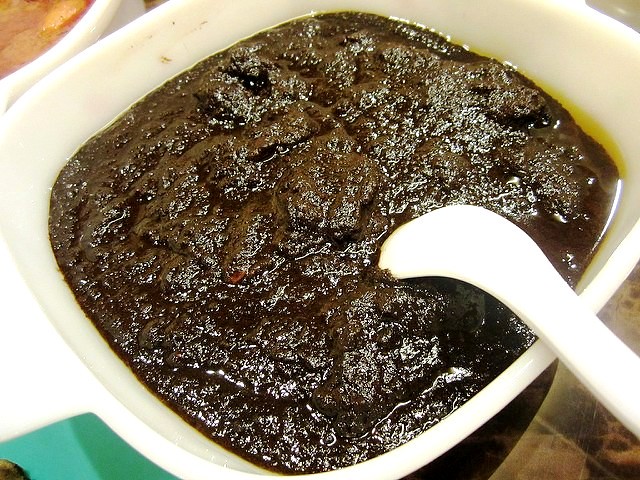 …(unlike Sarawak laksa, which if I am not wrong, is a Kuching Chinese creation) is the favourite of many but both my missus and my girl are not all that fond of it, maybe because of the hint of the sweetness in it but no, it is not really sweet, just a hint of it, I said, like in the case of satay or char siew…and my girl does not like raisins, I don’t know why.

It is not really hitam or black, more of a darker shade of brown though I have seen some really black ones at wedding banquets like this one, for instance… 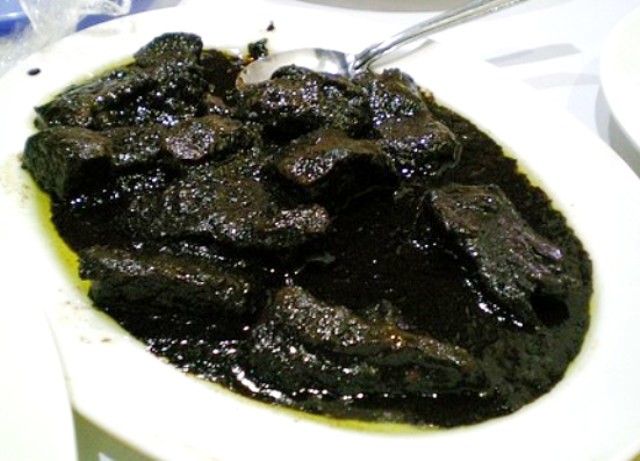 My missus insisted that they used browning but I don’t really know how they did it…but whatever the shade of black it may be, I love it! It does not matter that nobody the the house likes it so much and nobody is going to cook it – I can easily go out and buy at this favourite Malay food stall of mine at Bandong here. They have it every day and yes, theirs is very nicely done. You can buy the meat by the chunks, RM1.50 or maybe RM2.00 for one huge piece and they will give you a lot of the very nice gravy that goes so absolutely well with rice. The one here is also very nice and you can have it with your nasi lemak or whatever and they do sell it by the kilo as well for when you are hosting a buffet dinner party at home or something though I can’t remember the price now.

As a matter of fact, you can find it quite easily at all the Malay stalls and shops in town and they would all be pretty good but I did hear once that most of them do not cook from scratch and would use these… 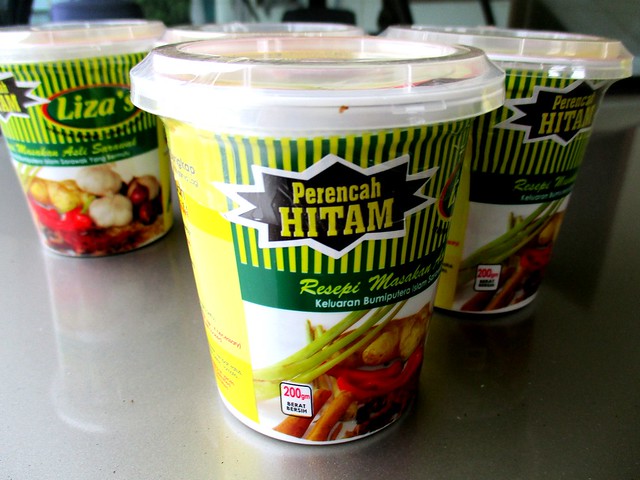 I did give a tub to my Ipoh masterchef/blogger-friend, Elin and she used it to cook her own version of the masak hitam dish and she loved it so very much, praising it the the skies. Here, you can read all about it here. I also gave some to a friend of mine, my girl’s lecturer in Sg Petani, Kedah and every Hari Raya, she would ask for more. Obviously, she liked it a lot too. Well, since it is so good, we never bother to cook from scratch anymore. All I would do would be to fry one Bombay onion, finely chopped and one or two stalks of serai (lemon grass) for the added fragrance, add the meat and paste and water and simmer till done. So very easy!

I told Phong Hong in my comment that I would get it for her to try but horror of horrors!!! When I dropped by the shop where I used to buy this, they told me that it was not available and they had not received any for a while now, so their guess was the company had gone bankrupt!

That afternoon, I went round some supermarkets and shops – I did see the asam pedas at one of them but I did not want that. Then, something told me to go back to the first shop, the one I went to that morning, to check a smaller one about two doors away and to my delight, they had what I was looking for and a whole lot of others from that same Miri-based company, Liza’s. 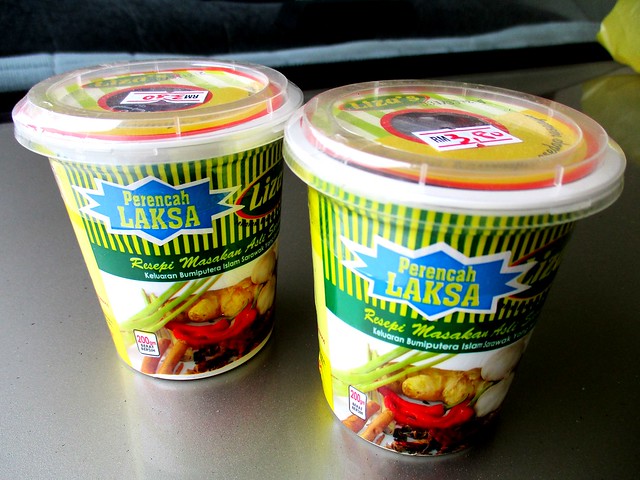 …to try. I’ve never tried it myself but I have heard people saying that it is very good, just that there isn’t much one can cook using one tub – maybe two or three bowls whereas if you use the regular laksa paste sold in packets, you would have enough to feed an army. One thing good about this one is you would not need to sieve the soup/gravy to remove all the fine ingredients. Well, if Phong Hong does not know how to go about it she can click the link to this one here…and there are a few others in my blog as well where I had featured a step-by-step guide to cooking Sarawak laksa.

I packed everything in a box and sent it to Phong Hong the very next day…and here’s a bit of good news. I received an sms from her a little after noon the following day after I had sent the parcel telling me that she had received it. Gee!!! As a matter of fact, I also sent a pack of sambal Sarawak laksa, the regular, to a friend in Banting, Selangor the day before and she too got it the very next day. Our national courier people can be quite efficient sometimes…when they want to. Double thumbs up, guys! Hehehehehe!!!

Happy trying, Phong Hong! Hope you like the goodies from Sarawak!