I had not heard from my dear friend in KL, Mandy, for quite a while and I was wondering how she was doing. She was not active on Facebook either – had not seen her there for a long time too. That was why I sent her a message to ask how she was doing but I did not get a reply until a couple of days later.

My handphone rang but it was somewhere in the house, not by my side, and by the time I got to it, the ringing had stopped. So, I called her back and yes, it was great to get to talk to her and to know that she was getting on all right, just that she had been so busy with her work and everything.

She said she had been here on her working trips twice, I think, but they stayed in Mukah, not in Sibu, and according to her, the road from the junction, a little past Selangau bazaar on the way to my girl’s school, to the town was much better than the Sibu-Selangau sector. I had thought of driving there and spending a few nights in the town enjoying the fresh seafood but when the time came, I changed my mind. Perhaps I should make a trip one of these days.

We talked for quite a while and when I ended the call, I got the prompt from the telco informing me of the balance that I still had and telling me that the call had cost me RM25.60. Good grief!!! For that kind of money, I could have bought two packs of the Sibu instant kampua mee and sent to her via our national courier, the so-called “fast post” and there would be enough to cover the cost of the noodles and the postal charges. Still, it was great to get to talk to Mandy after all this while so it was fine by me. That was what mattered most.

Later that day, I saw some friend LIKE-ing this ad from the telco… 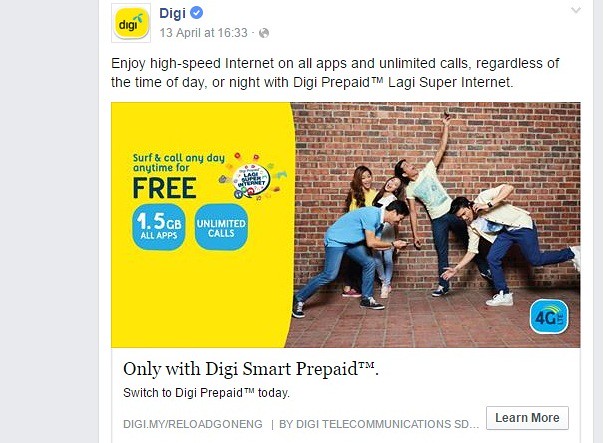 …on their Facebook page. “Unlimited calls”, it said. I guess that meant one would be able to make free calls should one subscribe to the plan?

Of course, the ad got quite a few comments, none favourable, and I thought I would just add my two-cents’ worth… 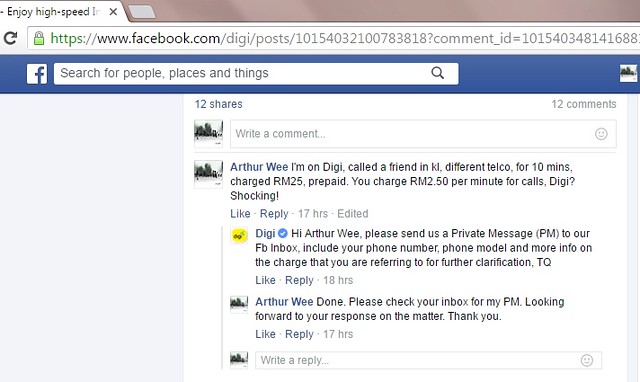 …and much to my surprise, I got an almost instant reply from them!

I did what they requested immediately and sent them my phone number, handphone model and all and I even forwarded a photograph I took of the prompt on my handphone… 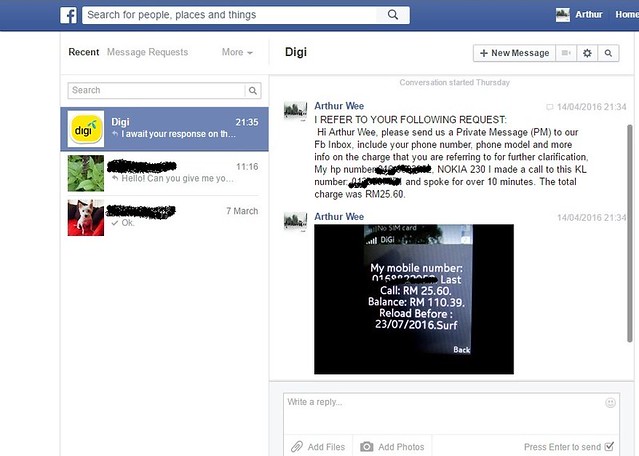 I did check the call log and saw that we had spoken for over 10 minutes but I had deleted that once I had seen it so I could not attach a snapshot of it.

That was Thursday and according to their Facebook page, they would check their PM on Monday to Friday from 9.00 a.m. onwards. I did not hear anything from them on Friday and then, it was the weekend so I guess I would have to wait till today, Monday or later if I were to get any further response from them.

Well, I never expected anything initially but now that they had responded in such a manner, I would want to hear their side of the story, at least. I do not think I will be hearing much else from them after this though – I looked at all the complaints in the other posts on their Facebook page and this looks like their standard reply – the same response to everybody like it’s computer-generated or something of that sort.

Checking my account status, I noted that I had been their customer since 2002. Gee!!! RM25.60 for a 10-minute call, Sibu-Kuala Lumpur, RM2.50 per minute. Perhaps it is high time that I switched telco. What do you all think?