You would remember these… 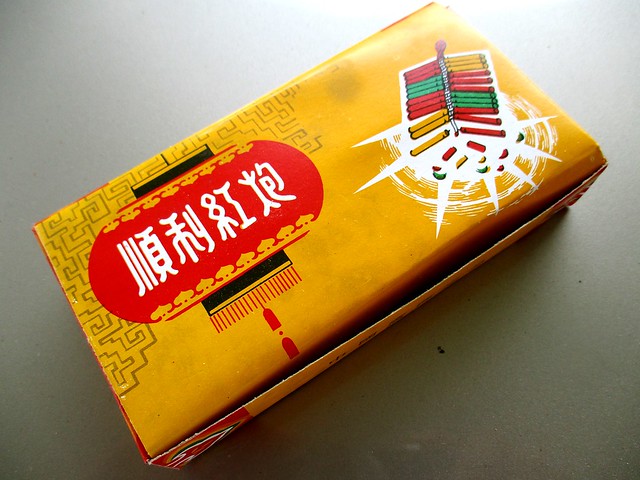 …if you were as old as I am. They’re very difficult to come by nowadays – I guess nobody bothers with these anymore, not when they can get those earth-shattering, nerve-wrecking, very very loud ones these days.

Yes, I do 放爆竹 (let off firecrackers) come Chinese New Year every year but no, I would not bother doing it at the stroke of midnight on the eve as everyone would be letting off theirs and these would pale in comparison and could hardly be heard. I only do it for the sole purpose of preserving the tradition – one in the morning of the first day before we sit down to eat the longevity noodles (mee sua) and another one after the Chap Goh Meh dinner to draw the festivities to a close, one piece… 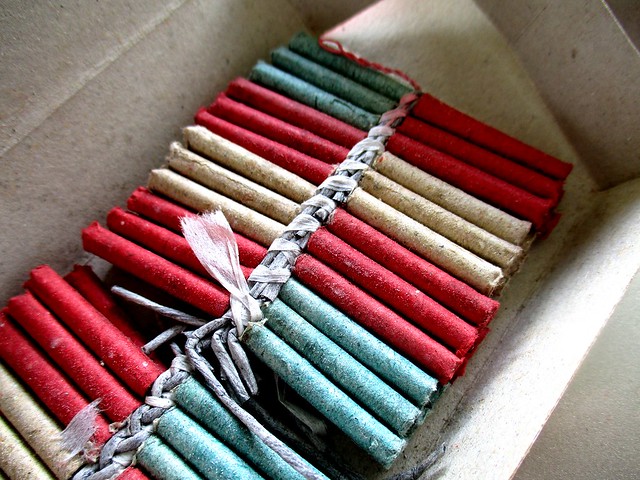 …each time so a box like that would last me five years – I think there are 10 pieces in each box. The way things are going, I wouldn’t know if I would be able to get anymore when these run out.

We sure had a lot of fun playing with these when we were small. We had bigger ones too then, the size of a finger – just a piece in a packet, wrapped in red paper with the label stuck in front. We did not have the luxury of having all that we wanted so we would take each piece apart and play with them, one cracker at a time.

I remember when we used to stick one into the ground and place a Milo tin over it. The explosion would send the tin flying into the air and the competition then would be to see whose tin could fly the highest. I do recall also that one time when it did not explode so I went and lifted the tin to check…and it exploded in my face. I could hear sirens going off in my ears but luckily, they faded off after a while so I guess that did not leave any permanent damage…I think!

Back to those smaller ones in the photographs, I also remember how we would use thread to tie the pieces together as long as we could (afford), several boxes at one time, to get a long string of firecrackers that we would hang up and let off at midnight, Chinese New Year’s Eve. Woe betide the one who did not tie them well and the bangs stopped midway, *face palm*. Eventually, they were available in long strands/strings so we could just buy those instead of going through all that trouble to tie our own.

And who remembers those sparklers… 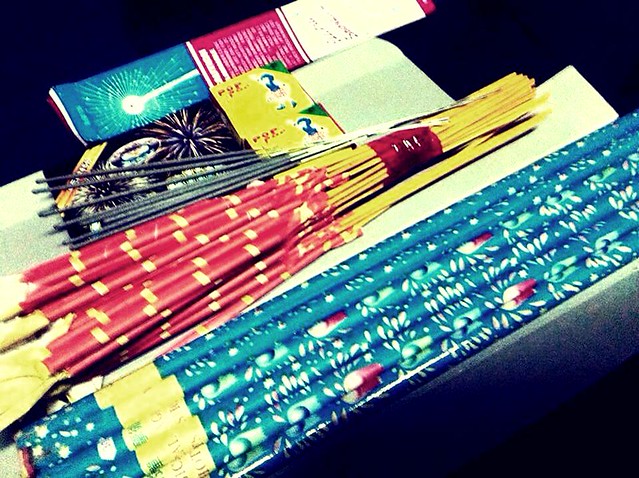 – the grey ones held on to by the “wire” or the metal end? And who remembers holding it close to the arm to let the sparks fall onto the skin…just for the cheap thrill of it? And who was foolish enough to hold it by the other end when it was all over…and paid the price for the folly?

I remember those red ones too. They used to come with strings attached, not on sticks like that and we would light them up and swing them round and round, finding such delight in the colourful sparks that flew out of them. I remember the ones my father used to buy too – long cylindrical ones that he stuck into the ground, aimed skywards. You poked one end open to expose the volatile powder inside, lit it and the shots would shoot out one by one. The number of shots would depend on what you bought – the more shots, the more expensive.

Of course, those cannot compare with the ones that they have today. I have seen some the size of a car battery…and others the size of a Mandarin orange box! They must have cost a fortune and the thing is I don’t think the kids would be the ones playing. I’ve observed the grown-ups having the time of their lives while the little ones would play on their own by the side, all engrossed in their smartphones or ipads, not in the least interested, obviously. Well, those would be too dangerous for little kids to play with, anyway.

There was a ban on these sometime ago limiting it to only Chinese New Year’s Eve and the first 3 days of Chinese New Year but I don’t know if that is still in force or not.  I don’t mind people playing but they should be considerate not to go on and on the whole day and not late into the night. There are people with babies who would not like it one bit. When my girl was small, she would end up jittery, a nervous wreck when each loud bang would cause the whole house to shake and the glass panels to vibrate! That was why in those days, we never celebrated Chinese New Year at home and each year, we would go off some place, stay in a sound proof room high up in some hotel just to get away from it all. We had no choice but to do that until quite recently. 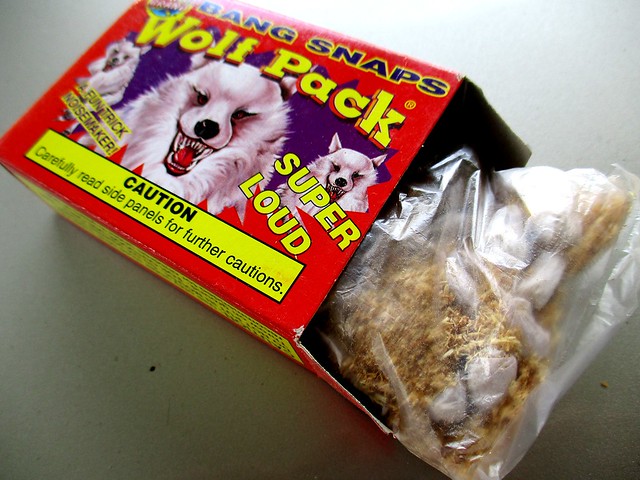 …are more recent. We used to throw them at the feet of people and the ladies would go shrieking and everyone would laugh at them. There was another one with strings on both ends and that would need two persons to pull for it to explode. We would tie them to the doors and when somebody pushed the door open, he or she would get a fright. That was so funny…or at least, it was at the time. 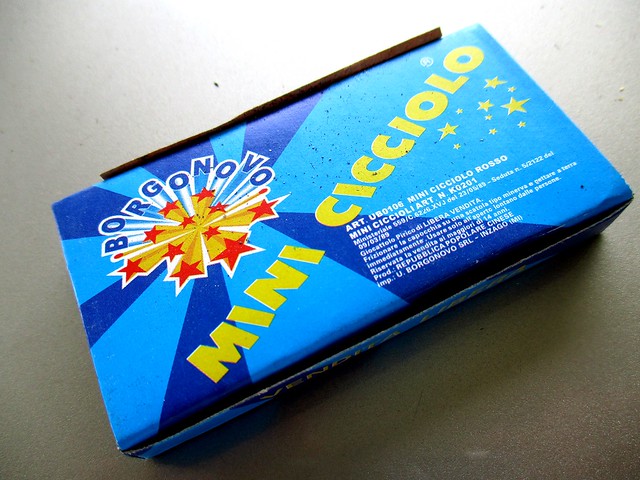 …from Huai Bin sometime ago.

You just light the sulphur tip… 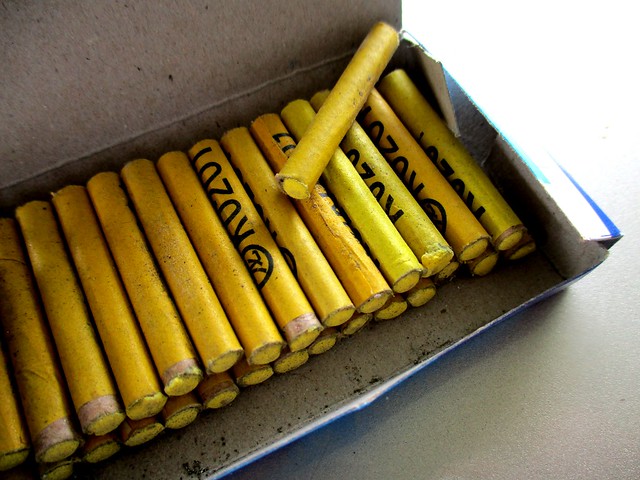 …and throw and it will explode. Yes, it is quite loud but that is just a single bang, one at a time. They sure come in handy to scare off the birds. I do have a lot of narcissistic ones that would hang around the side of my car, admiring themselves in the side view mirror. That is  perfectly all right if they do not leave all their droppings by the side of the car and I would have to go through the chore of cleaning up the mess one time too many. Tsk! Tsk!

I would also use these with the dogs in the neighbourhood. No, they are not stray dogs – they belong to one neighbour down the lane, some half a dozen of them. I do wish people who keep dogs would take good care of them and keep an eye to make sure that they do not go roaming around urinating here and there, which is all right actually but the problem arises when you get one pile of their poop right in front of your gate and you would have to go and get rid of it in case your car or somebody else’s runs over it and spreads it all around. One loud bang with these firecrackers would send them scurrying back to their own house. I think they all know me now. Everytime I see them loitering around along the lane, I would go out to the gate. They would nonchalantly trot past and go quietly back home – there is no need for me to throw one firecracker anymore to get them to do that. Smart, eh? And that makes me wonder why they can learn…whereas some humans seem quite unteachable.

And what about you? Any nice memories, pleasant experiences with fireworks and firecrackers to share?