When my uncle and the rest of the family members drove here that day, they were able to go round by themselves so I did not get to join them all that much when they went to places that they knew to eat all the things that they loved so well.

On the day they arrived, upon their request, we went for dinner together here and of course, I ordered some of our favourite dishes here like the butter scotch prawn balls, the Thai-style mango chicken, the cangkuk manis fried with egg and also the bitter gourd with salted egg…and we also had this – their stewed pork belly with yam… 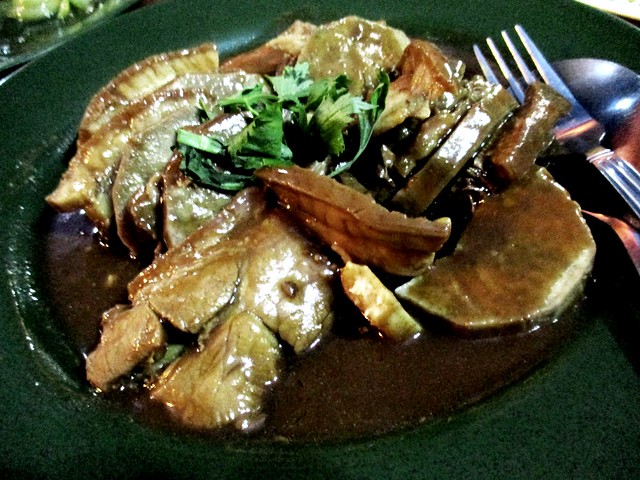 …which we had never tried before and yes, it was good and everyone enjoyed it a lot. Unfortunately, the lighting was a little dim so the photograph did not do much justice to it. For that same reason, I did not take snapshots of all the other dishes that we had. Of course, if I were to compare the two, they were not the same dishes but personally, I liked what we had here – the pork belly with preserved vegetables – more. There were 10 of us that night and the 3 meat and 2 vegetable dishes came up to only RM120.00. Including the rice and drinks, the total was a little over RM150.00 but as always, the kind and generous boss waived the extra and collected RM150.00 only from me. 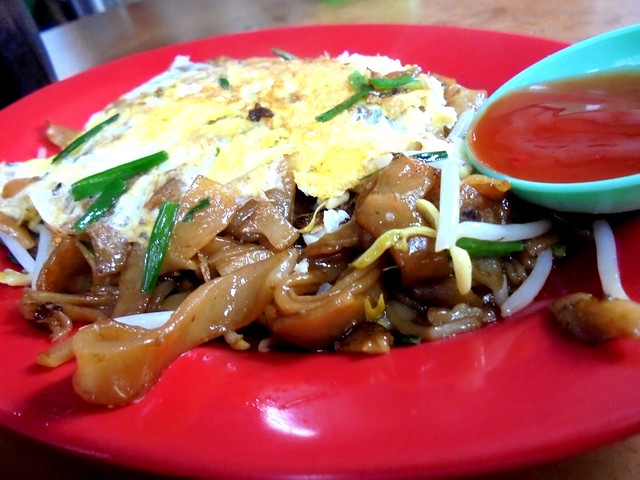 …here that they used to enjoy so much those years when they were living in Sibu turned out to be most disappointing. In the past, the father was the one running the whole show, doing all the frying but he had passed away so right now, the son and I don’t know who else, have taken over. I would agree with them on this as the last time I had it myself, I also did not think too much of it.

On their second night here, my uncle, his wife and my cousins had to go to the airport to pick the eldest daughter who did not come with them by car and was flying into town and after that, they went here for dinner. Of course, they had the very nice fried kway teow with cockles… 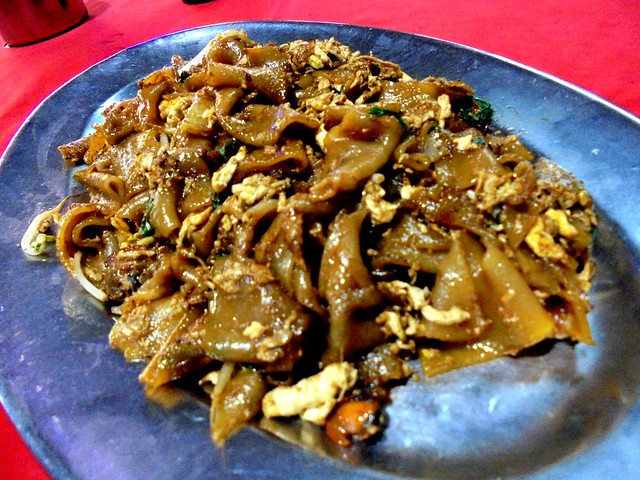 …and I heard that they also had a plate of lemon chicken, fried kang kong and sizzling tofu on a hot plate. I saw the photograph and the servings looked really huge plus they enjoyed what they had and that was all that mattered.

The rest of the group, four of them and three of us, me, my missus and my girl, went here instead. By the time we got there, they had already ordered the otak-otak, the mushroom roll, the belimbing prawns and the pomelo salad and we added one more to those, their green curry plus their dreamy nite for dessert. Of course, they enjoyed everything and the nice boss gave us a huge plate of their herbs salad… 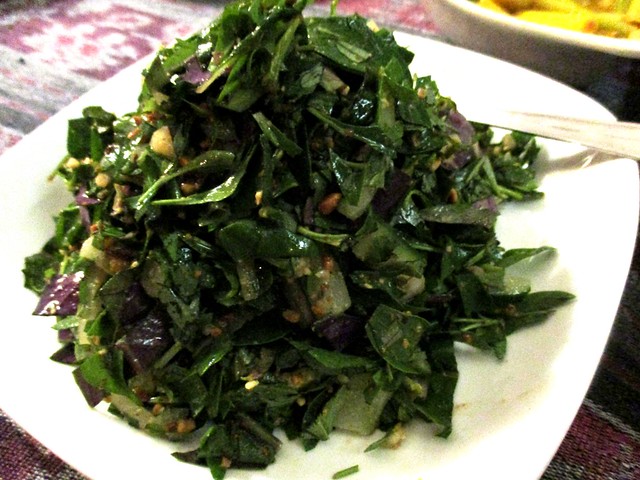 …and his very special fried tempoyak on the house. My auntie recalled sweet memories of how tua-ma (great-grandma) used to cook it this same way and she would dip green cili padi in it and eat.

They were playing the lovely keroncong songs again that night and when this song came on, my auntie exclaimed, “Oooo…Bengawan Solo!!! Ah Get-Ee (Auntie Ah Get) used to sing that!!!” It certainly was a walk down memory for her that night. My late Auntie Gertrude, who passed away in 1982, was a very good singer and she used to sing at public functions and parties and her most famous songs would be this one and also You belong to my heart.

My cousin picked up the tab that night and I think the total was over RM100 for the seven of us, I cannot remember exactly now, inclusive of drinks and rice but there were two complimentary freebies plus it was a much classier place than the aforementioned and all things considered, I would think it was worth it.

The next day, in the evening, we had the special dinner to celebrate my uncle’s 75th birthday and the following day, early in the morning, they went on their way back to Kuching.

P.S.:
The other day, I got a call from my old friend/ex-classmate, Robert. He said he had something he would want to give to me to try…so we arranged to meet and this was what he passed to me… 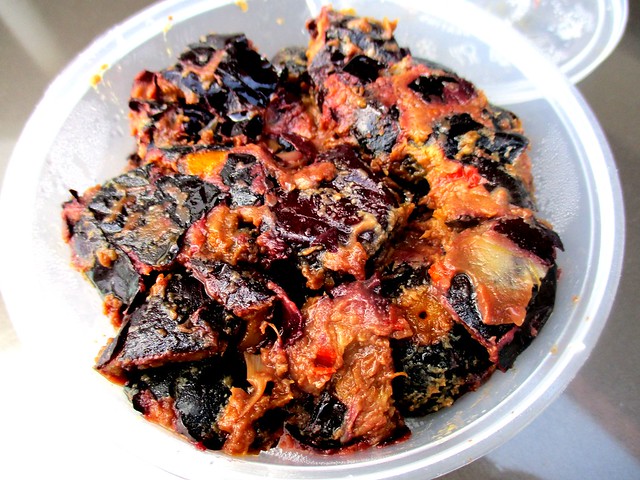 – fried dabai (local black olives), cooked by his missus, Angela. Yes, it was very nice – she had used very good dabai and cooked that with a  lot of garlic and chili. It was not spicy though – chilies these days do not seem to be hot at all. I had that with rice and had to refrain from going for a second helping! It sure was nice of you two to share some with me, Robert & Angela, thank you so much!