I checked out some blogs on how to cook half-boiled eggs, also known as half or soft-cooked eggs, the old school way – the way my mum would do it and those before her. This one, for instance, has really nice photographs and they all said the eggs would have to be immersed in boiling water for 6 minutes to be perfectly done.

Well, I was thinking of having our typical Malaysian breakfast that day – half-boiled eggs with kaya toast and kopi-o (black coffee) so I took two eggs from the fridge and left them out for around an hour and then I rinsed them before use. My missus has this thing about washing the eggs first though I always wonder why since we do not eat the shell – I guess her years working as a nurse have made her more particular about cleanliness, not like me. More often than not, I, on my part, would prescribe to the age-old maxim, “La sap ciak, la sap pui!” – direct translation: dirty eat, dirty fat! LOL!!!

I placed the eggs in my little pot… 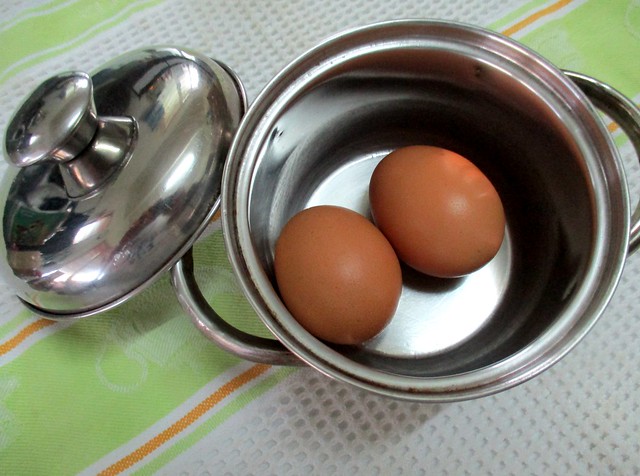 – I love this set that I bought from Giacomo a long time ago, three of varying sizes in a set for only RM10.00, if I remember correctly, and this one is the smallest, absolutely perfect for this purpose.

Then, I poured in hot boiling water… 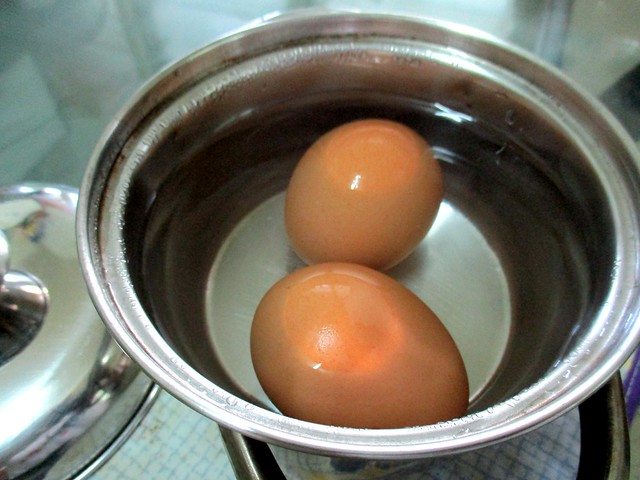 …and covered the pot.

In the meantime, I toasted some slices of bread on a non-stick pan (I love having toasts like this – not toasted in a toaster) to make my kaya toasts… 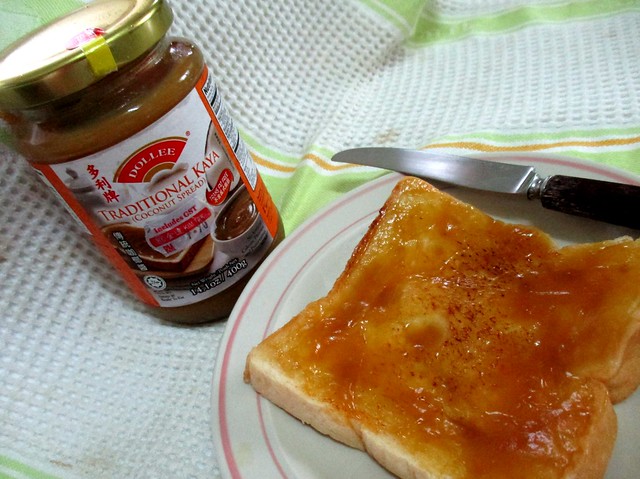 Incidentally, if you are thinking of buying some kaya, I would not say this would be the best choice. That day, it was more of a case of carelessness on my part. I needed some kaya to eat some kelupis that I had bought with so I just stopped by the mini-supermarket near my house and grabbed a bottle. Only when I got home and sat down to enjoy my kelupis with the kaya did I realise that this was not the brand that I wanted.

I thought I had purchased the made-in-Singapore Glory Brand that I like very much – same kind of bottle, same shape and size, and the labels look rather similar, near identical. Both brands also have the pandan ones but my girl does not like that – she prefers these traditional ones. This brand that I bought is rather sweet, a bit too sweet for my liking, and has that kind of taste that reminds me of those coconut candy that I used to eat when I was a kid – the cylindrical ones in colourful foil, wrapped in transparent plastic wrappers.

However, when applied with a generous amount of butter on toast, it actually tasted pretty good! Still, I do not think I would be buying another bottle as it is more expensive than the Singapore brand so unless they lower the price or there is a special offer, I would still go for the latter.

Anyway, back to the eggs, I waited a little longer, 8 minutes to be exact – 2 minutes extra, and when I broke the eggs, I was rather disappointed… 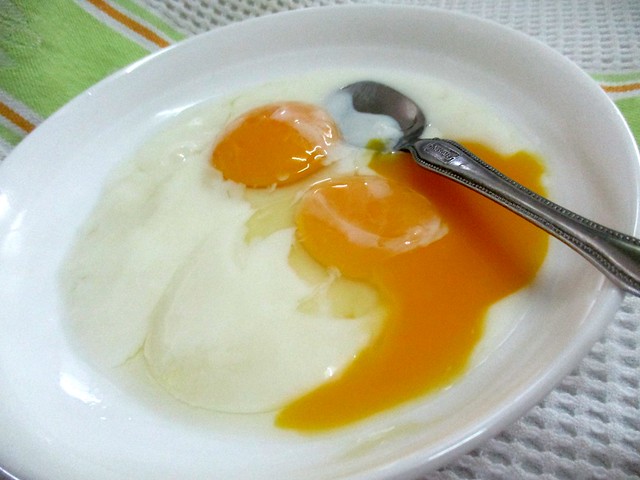 As you can see in the photograph, they were not really cooked yet, the white especially. Ah well!!! I guess we can literally say they were half-cooked. Tsk! Tsk!

So where did I go wrong? I poured in the water the instant it started boiling so that would rule out the possibility that my boiling water was not as hot as the rest. The eggs did come out of the fridge but I did not cook them right away – that was around an hour later plus I waited an extra 2 minutes longer than the stipulated time. I did not notice at the time but looking at my 2nd photograph, perhaps I should have poured in more of the boiling water to completely cover the egg?

When my missus got up, I asked her how long she would usually take to do this – hers always turned out perfect! Well, she told me 10 minutes…or maybe a little bit more than that. I do not usually do it like this – instead, I would boil the eggs like this, around 3 minutes or a little bit longer from the time the water starts boiling and I would get them the way I like them – egg white already hard, like hard-boiled, and the  yolk still runny. 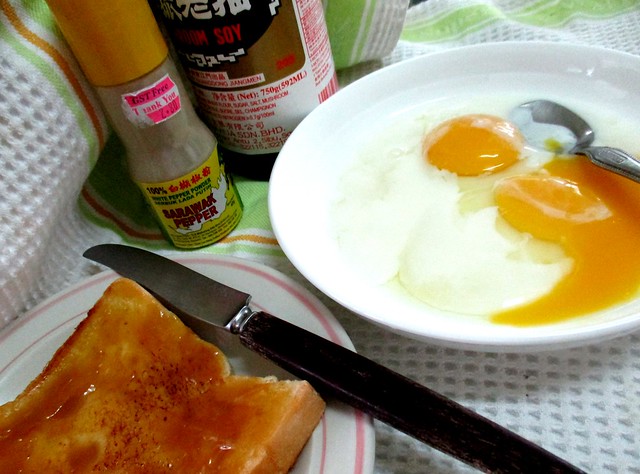 …for my breakfast, no problem at all – no after effects. Perhaps my tummy is steel-lined already from all those years of la sap ciak, la sap pui? Hehehehehe!!!!!

22 thoughts on “Much more than that…”