Well, I will never know unless I try, right?

For instance, I think it was Princess Ribbon who mentioned that she loved the white chocolate almond ice cream… 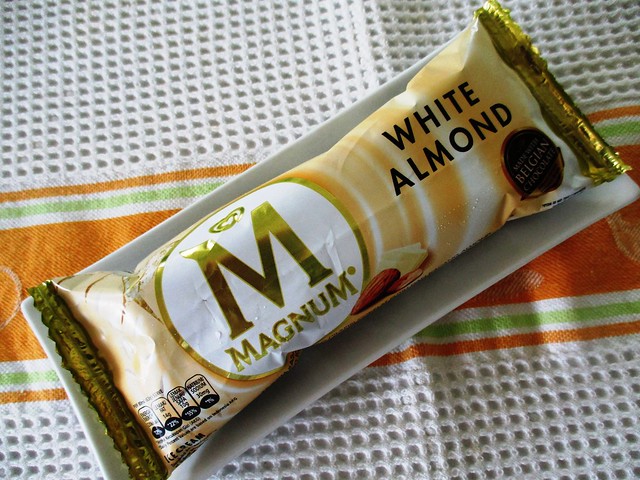 …a lot so I just had to go and grab some to try.

They are sold singly here at RM4.00 each…or in boxes of 3 each at RM12.00. Somebody mentioned that they were available at a couple of supermarkets here so I quickly made my way there. Unfortunately, there were none to be seen anywhere at those places. I went back to confirm that it was white, not the regular dark chocolate as those were readily available and yes, it was indeed white and probably they were all sold out.

In the meantime, I saw people here, there and everywhere posting photographs of theirs on Facebook too. Gee! That must be really so good, I thought to myself. Then, I heard that some were seen at another supermarket in town so I quickly rushed there and grabbed a few. And now the moment of truth! 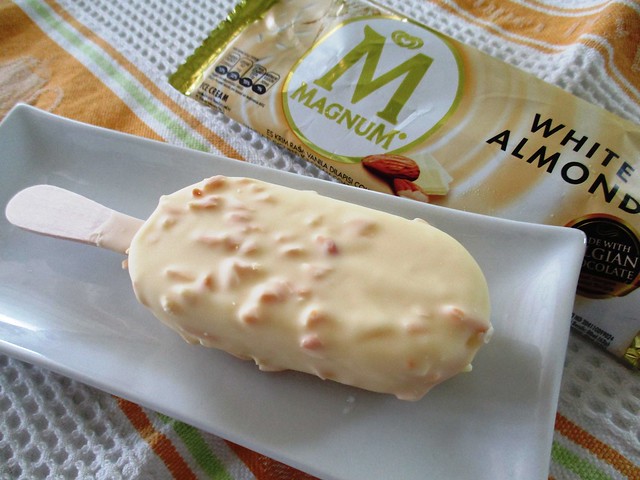 Well, it was nice – after all, how can ice cream ever be not nice? But I did not think I liked the white chocolate on the outside… 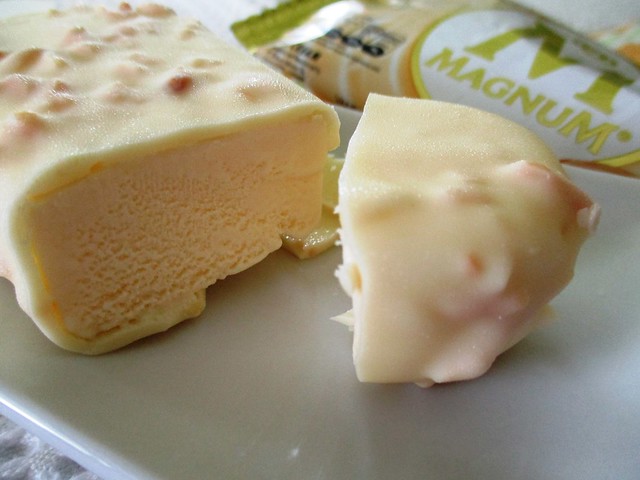 …as its taste did not stand out from that of the vanilla ice cream inside. I honestly think I prefer the ones with dark chocolate which I did buy to try as well when I went searching for this one and failed to find any.

Incidentally, when I was buying the ice cream, I could not help but wonder why they are being sold in boxes of 3 and yet, they are available singly or loosely. Perhaps the prices are different elsewhere, not like the ones here but if it is going to be the same, never mind if you are buying 1 or 3 or more, why bother packing them in those not-very-cheap looking boxes then? For one thing, it is not environment-friendly at all as it would end up getting thrown away eventually, right?

Ok, let’s move on from the topic of ice cream to…pancakes!

I had seen boxes of pancake mix at the supermarkets everywhere but I had never bothered to try them out so I did not know whether they were any good or not. Somehow or other, I never even bothered to take one to browse through and see what they said on the box until that day when I received one from Rose… 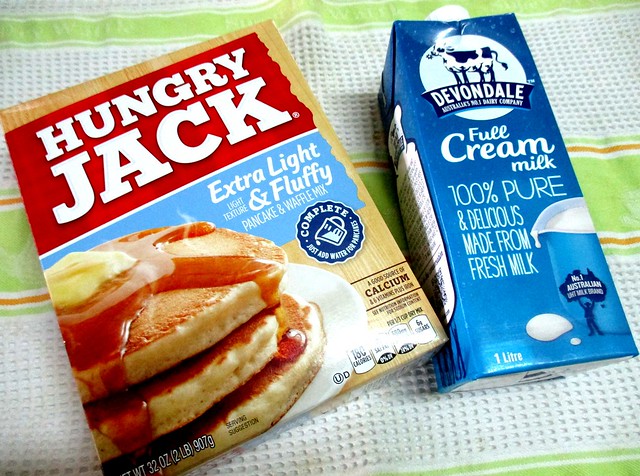 …in Kuching, made in the USA! Now, now, that must be good, I told myself! Just add water, it said on the box. Now, that sure sounded really easy…and Rose did suggest that I used milk instead so I went out and bought a carton, Devondale no less, made in Australia. It used to be dirt cheap at a time, just over RM1.00 and less than RM2 each and people would come to the supermarket in Sibu and cart boxes and boxes home. It was a lot creamier and nicer, they insisted and for one thing, the Malaysian reconstituted ones at the time were selling for over RM3.00 a carton. Now who on earth would be so foolish as to go for those when we could get fresh milk, the low fat variety included, direct from Australia at around half the price? Unfortunately, the price kept going up and up and up and they are over RM6.00 now so it is no longer all that affordable. Especially with our very weak ringgit these days, things from that southern continent definitely do not come cheap, not anymore. Sobsssss!!!!!!

I followed the instructions… 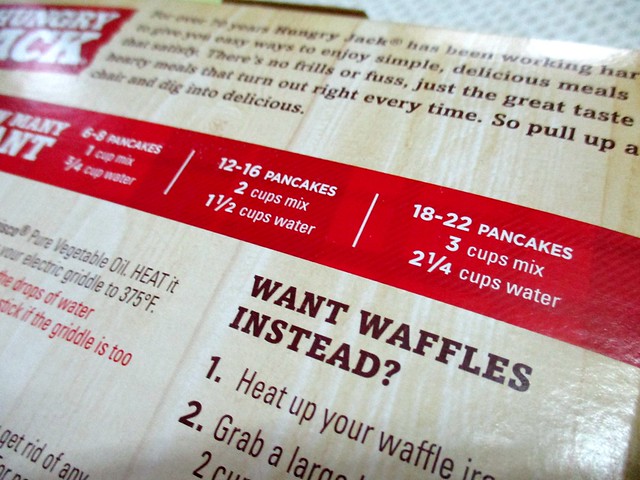 …on the box faithfully and in no time at all, I was ready to start frying.

After frying two pieces, I tried a little bit and goodness gracious me!!! It was light and fluffy all right but it was completely tasteless – not sweet, not salty, no buttery fragrance, nothing! I quickly added a spoonful of brown sugar to the rest of the batter and continued frying till I was done… 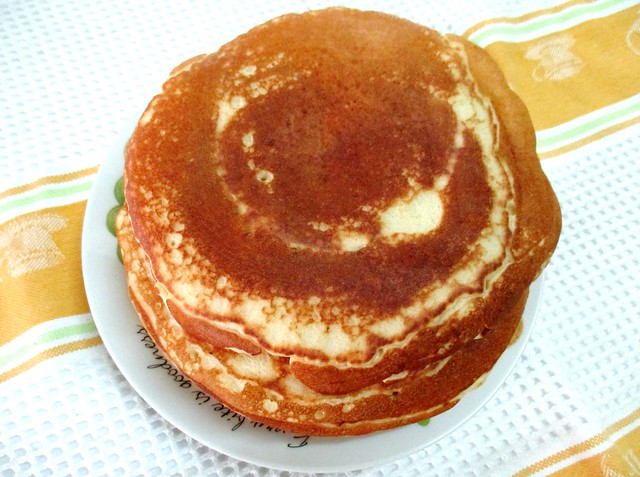 I only got around 8 pieces though despite the fact that it was stated on the box that I would be getting 12-16. Never mind! Since it was not all that nice, it did not matter one bit as I would not be giving any to my parents to enjoy.

Despite having added a little bit of sugar, it did not make much difference and of course, I did not have any of these… 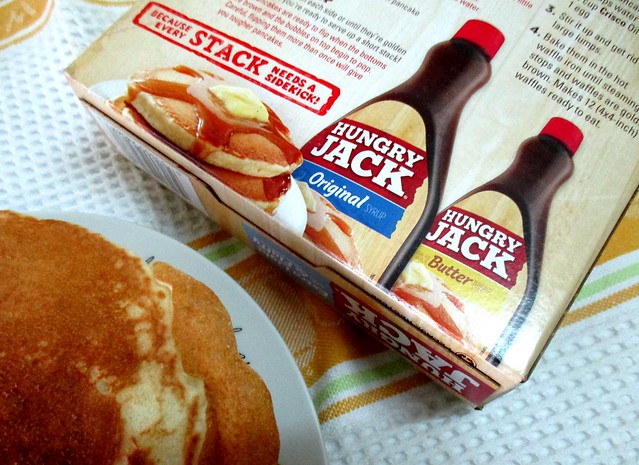 …in the house to go with the pancakes. I did have some honey in the fridge though and that certainly saved the day!

Still, I do not think I would want to go out and buy any more, not at all as it was not all that hassle-free, I must say. Mixing the batter is not all that hard actually and this actually required the same amount of work, greasing the pan and frying the pieces one by one…and considering all that trouble one would have to go through, I would much sooner settle for our own family recipe and come out with pancakes that are just as light and fluffy, with a so much more delightful richer taste and buttery fragrance, so good that we would enjoy just eating them on their own.

But thanks again all the same, Rose, for sending me the box to try – now I know…and actually, I still have a lot left so being very much the wiser now, I would not want to make any more pancakes with it. In fact, at this point in time, I’ve seen some recipes for butter cakes using pancake mix and I think I would want to give it a try…and see the end result. We’ll see how that will turn out, eh?