My friend, Ryan, asked me where he could buy The Kitchen’s instant kampua noodles as he would be going over to Kota Kinabalu, Sabah and he wanted to bring them over to give to his relatives there. It so happened that I was going to get 10 packs for my Singapore friend, Alfred who would be coming later this week – he bought two from the market the last time he was here and loved it so much so he would like some more to take back home to enjoy. I told Ryan I would order for him as well and pass them to him at a convenient time. That was why we met early that day at 8.00 a.m. for breakfast here.

He had the kueh chap… 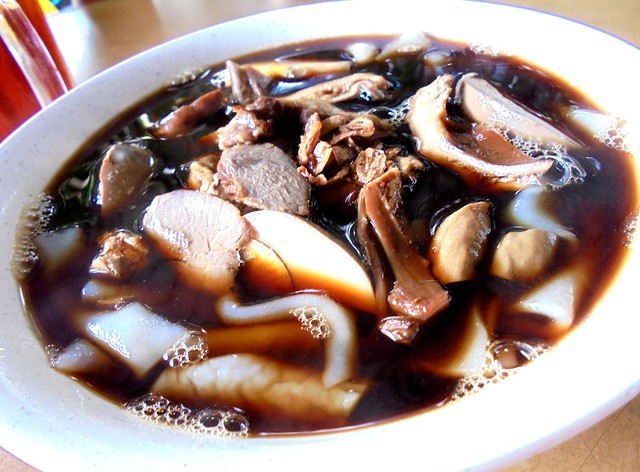 …which, if I am not wrong, is among the best in town.

I did not want anything too heavy as I already had something when I got up early that morning so I just had the porridge with telur padi (direct translation: rice egg) or what we know better as pidan (皮蛋 ) or century egg… 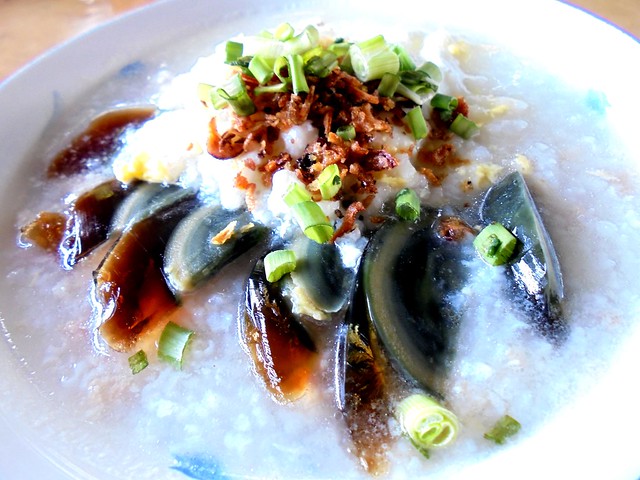 It was nice and Ryan said that his kueh chap was good too.

I passed the noodles to him and mission accomplished, I headed on home and thank you, Ryan, for picking up the tab for breakfast. That was so sweet of  you.

No sooner had I reached the house than I received word from my good friend, Annie, in KL. She was home with her twins to visit her mum and asked me if I could join them for breakfast. Of course I did not go!!! I already had two breakfasts that morning and I jolly well could not manage a third one. In the end, they went on their own and on the way back, they dropped by my house and Annie gave me these… 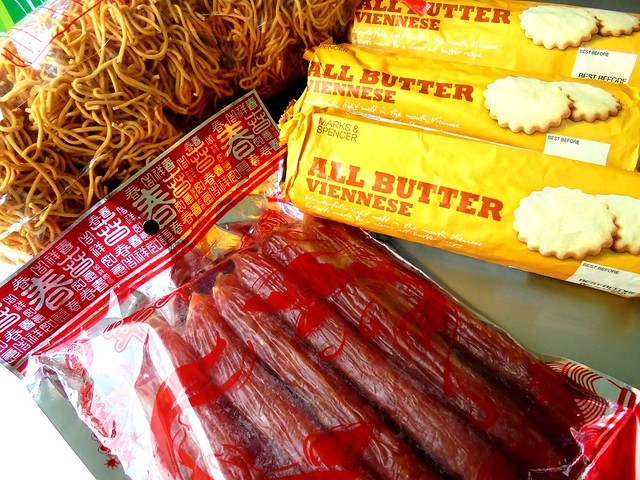 Ooooo…the wine-infused lap cheong (Chinese sausages)!!! I had finished all those that she gave me before…and maybe she got the hints I had dropping all over the place. My prayers were answered! Hehehehehe!!!! Once you’ve tried these, you will never go back to those very hard and dry and not nice ones that they sell in the shops, I tell you.

Annie knows my favourite Marks & Spencer’s All Butter Viennese cookies and she got me not one, not two…but THREE packs! Gee!!! She really spoils me, that lady! And other than those, she also got me a pack of yee mee (中文 ), a special type of noodles that they usually use in claypot or sizzling hot plate mee. My cousin in Bintulu sent me some once and I cooked those with egg sauce, à la wan tan hor style and it was very nice. At this point in time, I have not decided yet how I would cook these – maybe I can try the fried noodles, Kuching style with tomato sauce gravy. We’ll see!

Thanks so much, Annie – you are always so thoughtful and so very generous. It sure was nice to see you and your boys again.