In Hokkien, we always say khiaw koi hay. Translated, it means “poorer than a prawn”, the equivalent of “As poor as a church mouse” in English.  In my younger days, I was wondering why a prawn and not something else and I was told that it was because the prawn had nothing in its body, no bones. Hmmm…but it would have its very nice, sweet and succulent meat, wouldn’t it? That would more than make up for the lack of a skeleton. Later, I figured out that probably khiaw there sounded the same as “crooked” or “bent”, the same sound as the word for “poor” and that could be it especially seeing how it would curl up when cook.

Another often-heard phrase in Hokkien would be boh hu, hay ya hor, literally meaning “no fish, prawn also can”. That is kind of degrading for the prawn as the implication is that it is second best or something you would have to settle for when you can’t find something else when in actual fact, the crustacean is much more expensive and a lot tastier than many kinds of fish.

The prices of prawns (and fish…and everything else) soared round the time before Chinese New Year with the sellers putting the blame on everything – the rain, the flood, GST or whatever, except themselves. What I was told was that they would deep freeze their stock, the best that they had, to take out right before the festival day…and reap a bountiful harvest. 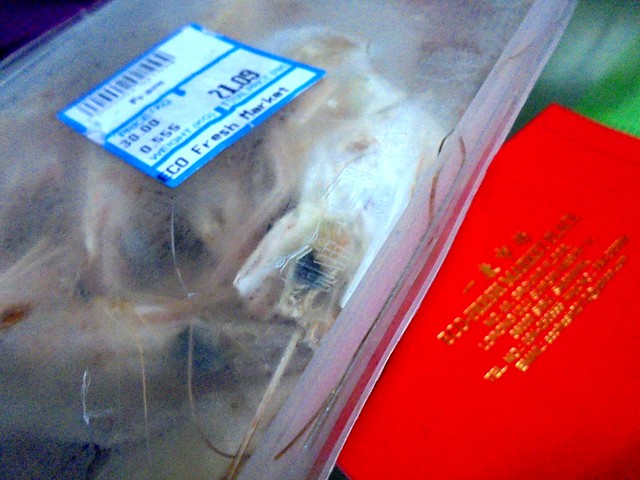 …frozen in blocks of ice in their respective plastic container.

Selling at only RM30 a kg for such huge ones… 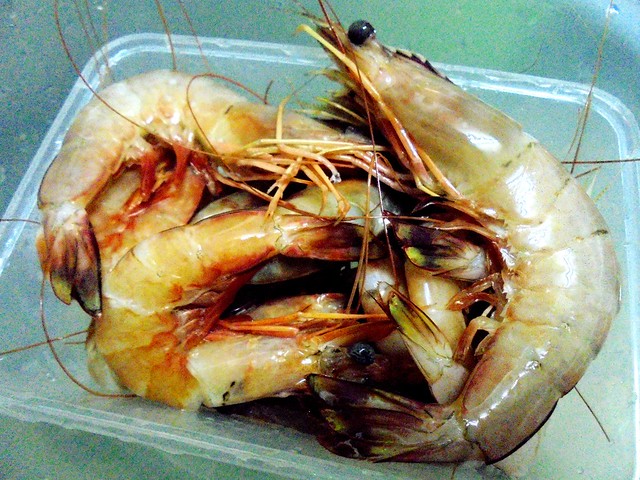 …I thought they were cheap compared to the prices at the market in  town. There were round about 20 inside so it worked out to around RM1.00 each. I also bought another pack at RM45.00 a kg and those were even bigger, around 10-12 only in one pack…but my missus said they were not the ones she was looking for. These extra-large ones, she said, would be the ones used for those very popular dishes at restaurants such as their butter prawns for one…and it would be a waste to use them for her ngor hiang. She wanted those small ones that go for around RM15 a kg instead. Well, she did manage to grab hold of some for her use eventually…and there I was, stuck with the frozen packs of prawns in the freezer.

I used one around Chinese New Year for my fried noodles and I gave the pack with the bigger ones to my girl to bring to her school for her steamboat with her colleagues on Chap Goh Meh. That meant that I had one pack left – the one in the photos above, so I decided cook something for our own Chap Goh Meh dinner at home and finish it all off .

I got hold of some nasi lemak sambal from one stall at the Medan Mall, Jalan Wong King Huo. I’ve tried it before and found that it was very nice, just not spicy…and I fried one Bombay onion, finely-chopped, with a stalk of serai (lemon grass), bruised, in a bit of oil before adding the prawns, heads and shell removed leaving the tails, and once cooked, I added a can of petai (stinky beans), Ayam Brand and this was what I dished out… 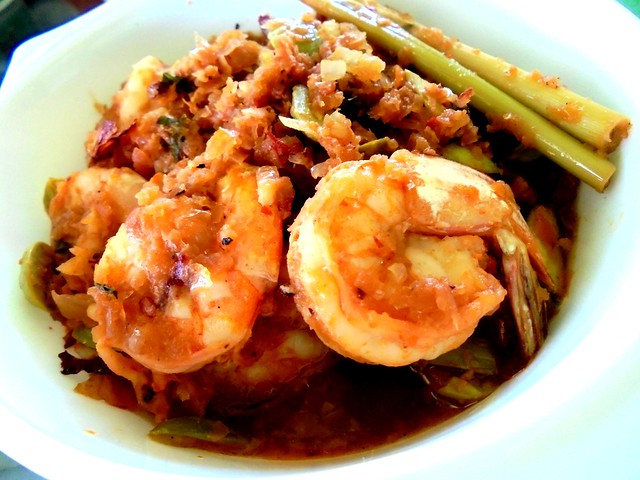 The canned petai, of course, was nowhere near as nice as the fresh ones one may get at the market and no, I would not say it was the best sambal prawns with petai that I’ve had but it was good enough, not too bad at all…and the best part was that it was almost hassle-free.

Stay tuned for more on our Chap Goh Meh dinner coming right up!