Well, I did not know that. In my growing up years, we called it t’nee koi or sweet cake in Hokkien and I was told that it was offered to the Kitchen God so when he went back to Heaven, he would say all the sweet things to the Almighty One up there and besides, it was so very sticky so the Kitchen God’s lips would get stuck together and he would not be able to report any bad things that one had done in the course of the year. Hmmm…isn’t there some kind of a conflict in that? If the Kitchen God’s lips were sealed, how would he, on the other hand, be able to report all the sweet things then?

As for it being sticky, I couldn’t agree more and that explained why, all through the years, I never liked it. I found it hard to bite and chew and to swallow and I would feel like I would choke to death, the same thing as when eating those tang yuan (湯圓) or glutinous rice balls or even mochi. My mother would cut it into slices using a string/thread – it was so sticky it was virtually impossible to cut it with a  knife, coat with egg and deep fry but that did not help. I still did not like it much and besides, that made it a little bit oily some more. For this reason, we have never bothered to buy any to eat, come Chinese New Year each year, so I guess you can imagine the Kitchen God going back to report all the juicy stories of all the naughty things we had done in the course of the year. LOL!!!

This year, however, was different! Some kind soul in KL was so nice as to send me her own homemade one… 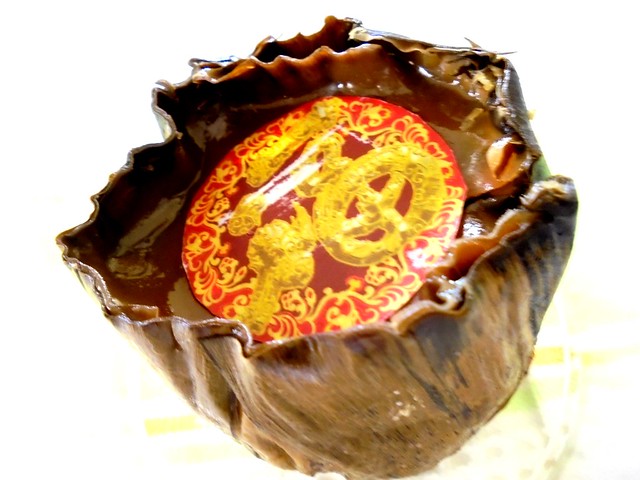 …in the hope that this year, the Almighty One would get to hear some sweet things about me for a change.

See how nice and smooth hers was… 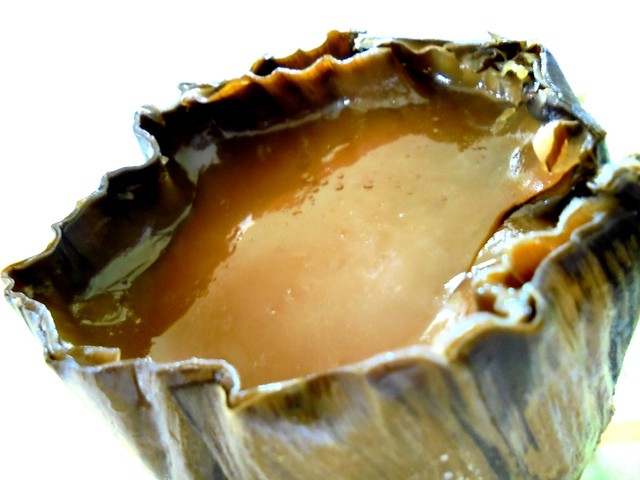 …and I did not know whether it was taken straight out of the fridge or what but it was kind of hard and so easy to cut into small slices using a knife. No, I did not have to look for a thread to do that.

A friend of mine said that she wrapped hers with popiah (spring roll) skin and deep fried them “till golden brown” and it was very nice. I did not know what she meant when she warned me not to fry for too long or it would “explode”! Surely one would need to fry for quite a while to get it all nicely browned, right? Anyway, I had no intention of deep-frying mine as I imagined it would turn out something like these… 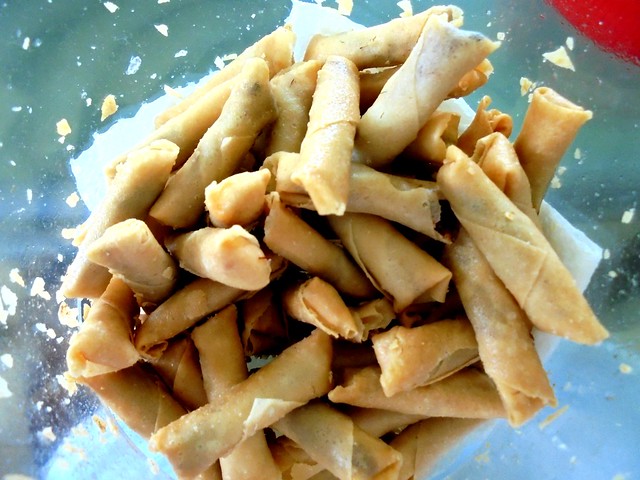 …rolls of meat floss wrapped in popiah skin and deep fried. My friend who sent me the nian gao she made gave me these too and yes, she made them herself as well. 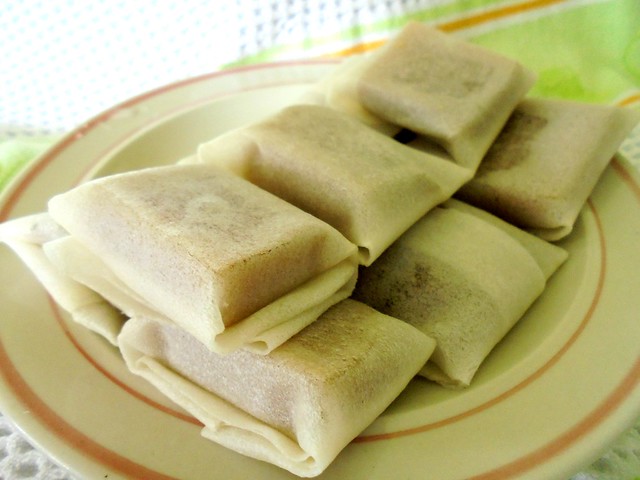 …and put them in the oven to bake. When I could smell the fragrance, I went back into the kitchen to check and oh no!!! Somehow, the nian gao had melted and seeped out of the skin. No, the packets did not explode, thankfully, or the nian gao would be all over the walls of the oven.

It was a little sticky, not too sticky – easy to pull off so I could get them out of the pan onto a plate without leaving any trace of it in the former…and all I had to do was to wrap the nian gao all around on the outside and eat. I guess it did not matter one bit whether it was on the inside or outside, right? This one came out looking pretty good… 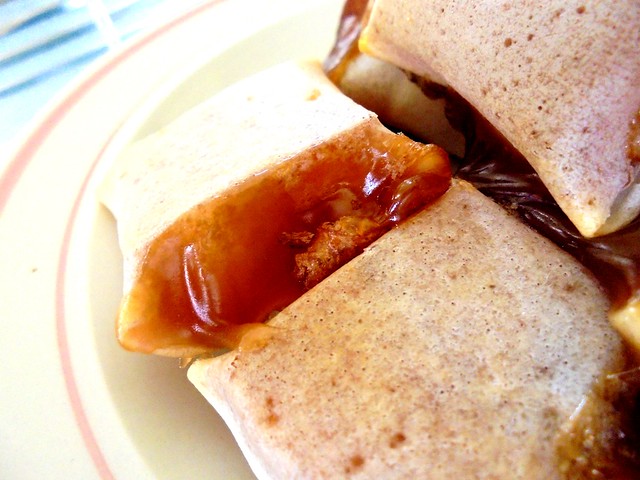 Well, I enjoyed it so much that I made up my mind right away that if my kind and generous friend would send me another one next year, I would do the exact same thing but maybe, I would use two layers of the popiah skin instead to make sure that the nian gao stays inside.

Now, call it sheer coincidence or what but right after I had enjoyed eating the outcome of my experiment, I went back to check on my Facebook page…and lo and behold! I found out that I had been named one of the winners of a 3-day/2-night hotel stay at Asoke, Bangkok or Patong, Phuket! I had joined a contest around Christmas on Tune Insurance’s Facebook page by just liking it and sharing the poster regarding the contest. Now, was that sheer coincidence or because of the good luck derived from eating the nian gao? LOL!!! Hmmm…the trouble is now I would have to fly to Bangkok or Phuket to use the prize… Sigh!!!!!

22 thoughts on “Inside outside…”