…going back to that coffee shop again…and I did!

The kampua lady seemed to be in a very much better mood. She was smiling and did chat a bit with the other customers. I guess on our previous visit, we caught her at a bad time and I thought she was kind of aloof and did not look very happy. Anyway, we did not go back for the kampua noodles. Like what I said then, I would want to try the chu car (cook/fry) place at the back so this time around, we ordered some stuff from there.

A major attraction in Sibu these days seems to be the prawn noodles, the ones with the gigantic freshwater udang galah (bamboo prawns) or what we also call tua thow (big head) or chia chui (freshwater) prawns. They do not come cheap, of course. It was only RM8.00 a bowl when they first started serving that here a long time ago (when it was at another location) and then it went up and up and when it went over RM20.00 a bowl, I never went for it again. The last I heard, they were charging RM35.00 a bowl…and in the meantime, there have been others jumping on the bandwagon. I’ve been told of one place where they would charge according to the sizes of the prawns used ranging from RM25 for the small ones up to around RM45.00 for the big ones. Then there is another place here serving tom yam prawn noodles in a coconut like the ones in Sarikei, going for RM35.00 each.

Nope! I am not one to go out of my way to feast on those noodles even though I have gone for them here and there a few times upon the insistence of family or friends especially those coming home from abroad. Well, I guess for them it is extremely cheap – imagine a bowl with those gigantic crustaceans going for only SIN$/AUD/US$10.00, more or less. Not only is that dirt cheap to them but they cannot get anything like that there and even if they can get noodles with other similar forms of seafood there, it will never ever be at that price, that’s for sure. But if I were to sit down to eat one RM45-a-bowl prawn noodles, I would not be enjoying it very much as on the back of my mind, I would be thinking of how I could take my whole family some place for a nice meal with one meat, one veg and one soup plus rice…and pay that much or perhaps even less. Besides, I would be a lot better off taking the money to buy a kilo of the prawns at the wet market to cook and enjoy to our heart’s content at home – they’re selling the medium-sized ones, not small but not those huge ones with the very big heads, at around RM35.00 a kilo…depending on the season. The other day, it went up to around RM60 a kilo though!!! Tsk! Tsk!

Anyway, back to the coffee shop I was talking about, I had their prawns noodles for RM10.00… 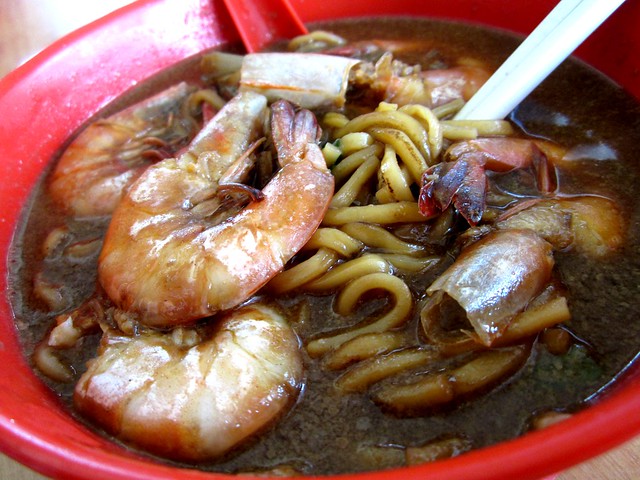 …and it was very nice! Nope, they did not use those not-too-affordable freshwater prawns but instead, they had some pretty big seawater prawns or what we call pek hay (white prawns). Of course, these aren’t all that cheap either. That day, I bought some about this same size for RM35.00 a kilo or maybe they were a little bit smaller. But the heads are not as big and the shell not as heavy so you can actually get quite a lot for a kilo. Roughly, it would work out to RM1.00 for one…or maybe a bit less than that.

Personally, I prefer these to the freshwater ones and what they had in the noodles that day were really fresh, very firm and succulent… 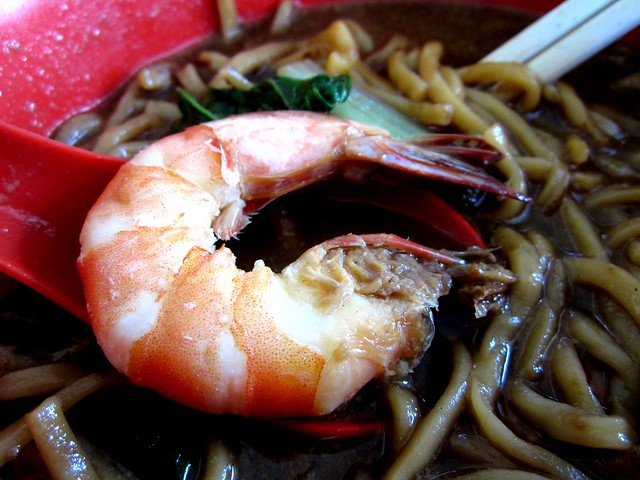 – around six of them and I would say that I enjoyed it a lot. The noodles were the Foochow-style ones, the soup version and with the added prawns, naturally, it was much sweeter and tastier. It probably would be nicer though if they had added a bit more greens – after all, those are not all that expensive and they could easily have thrown in a handful more.

My missus had the usual Foochow-style fried noodles (RM3.50)… 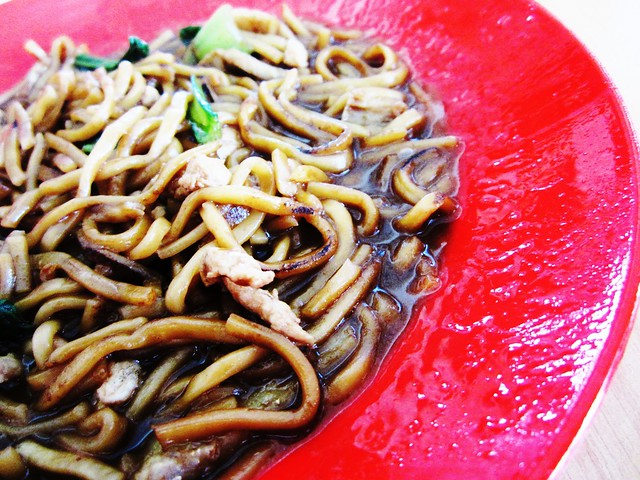 …and yes, they do it pretty well here but surely they could have used a kitchen towel or something to wipe the gravy off the side of the plate. Yes, it is quite obvious that they are not bothered very much about presentation here but it wouldn’t take a lot of effort, I’m sure, to just make what they serve look a bit more presentable.

Well, we’d probably go back there again but no, I would not have the prawn noodles again. Even though that was very nice, I do not think RM10.00 is all that cheap. However, I would want to try something else to see what is good. Each time I approached the stall on my previous visits, a very friendly young man with a pleasant disposition would come out to ask what I wanted and tell me what they had on their menu. Somehow, at places with people like that, one would feel nice and would surely go back again especially if the food is good.

There is also the Indian stall on the other side but it was not open that day, probably because it was Friday and my guess would be that they are mamaks, Indian-Muslims.