A car is like a human being too. When it is new and flashy, it will look great and will be the envy of all. People will admire and sing its praises and everything will run smoothly. However, it will grow old too – time will take its toll and problems may crop up time and again. However, if one takes good care of oneself from young and eat the right diet and have proper nutrition, stay away from all bad habits, go for regular check-ups and keep oneself active, one should be in pretty good shape once one grows old. Many people do not take good care of their cars – as long as it runs, it’s fine. In Hokkien, they refer to this as oo cho, boh ciak (direct translation: got do/work, no eat) and of course, it would come as no surprise that trouble would come knocking on one’s door.

I drive to Selangau and beyond once a week and very often, I would see cars breaking down, stalled by the side of the road and some of them are actually very new…not to mention, those with a flat tyre! I guess they feel it is not too far, just an hour and a half away (even though there is nothing much all along the way other than a few longhouses and jungle, trees, trees and more trees), so they never bother to make sure their cars are in tip-top shape before embarking on the journey. Every week, I would make it a point to fill up the petrol tank, check the air pressure in the tyres including the spare in the boot, check the engine oil, the battery water, the water in the radiator and the storage tank for the wipers/windscreen…and of course, every 5,000 km, I would send the car to the mechanic to change the engine oil and get him to look at everything to make sure everything is in perfect running order.

Humans have the daily ritual of keeping clean and may go out once in a while to pamper oneself – go to the salon for a hair wash or go for a massage, a manicure and a pedicure or something. Likewise, cars need to be pampered too… 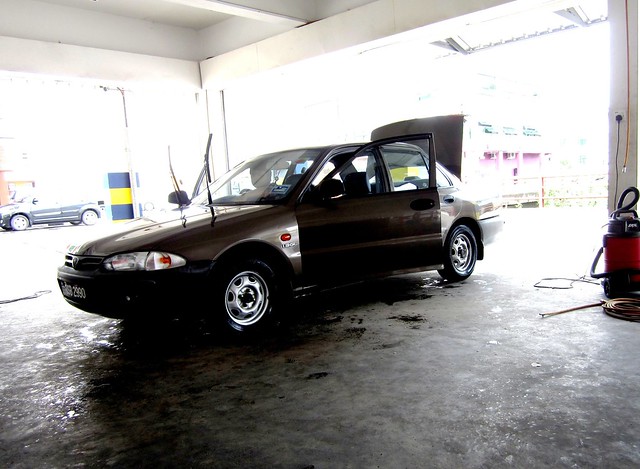 …like this old car of mine, already 20 years old and is in pretty good shape, I would say. Of course, it’s a manual but that is not a problem here. People tell me that it would be tough not driving an auto-gear vehicle in KL with all the horrendous jams all over and having to shift gear all the time for hours on end when they get caught in one.

Humans fall sick too once in a while and so it is with my car. There may be some problems cropping up once in a long while – a flat battery, the plugs need to be replaced, the treads are all worn out so the tyres need to be replaced…stuff like that. In fact, once I feel that something does not seem right, I would drive to the mechanic right away to have him look at it. A stitch in time saves nine, they say. If you ask me, I do think it does not look too shabby really, with its original paint and all, but of course, there will be people who will sneer, “Aiyor!!! Get rid of it lah, this old junk! Go get a new car! Don’t be so kiamsiap (stingy)! What for you save all your money? Can’t take it with you when you go!” Bla…bla…bla!!! True, how very true – that last bit especially but I do not see a need to get a new one when it is running well, no problems cropping up and no need to spend and spend on regular visits to the mechanic and it gets me from here to there and back through the sun and the rain… 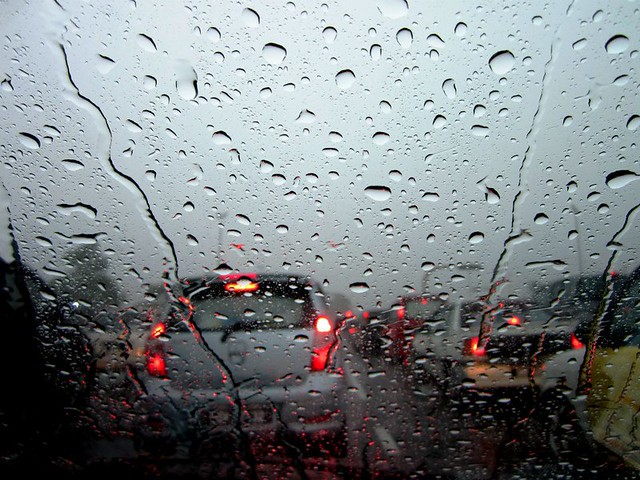 …so I really have no complaint whatsoever plus an old man like me sure doesn’t need to show off and drive a flashy car, zooming down our two-minute streets (yes, it takes two minutes or less to drive from one end of our roads to the other unless you go out of town, like me…and I can’t for the dear life of me understand why they need to go so fast) and parking the beauty illegally by the road side outside the coffee shops, flaunting away for all to see.

Yes, yes, I know. Old cars have no resale value. Neither have humans. Imagine if I were to go and ask for a job now, people would just laugh it off saying, “We can’t afford you lah!!!” when deep down inside, they’re actually whispering to themselves, “Who wants to employ you, you old goat?” Just look at the recent Budget, for instance – civil servants will get a bonus, 50% of their salaries, but sorry, no 50% for pensioners. We will get RM250.00, that’s all, and even that, we will have to wait till January! It is pretty obvious, isn’t it? They think we are not actively contributing anymore, never mind what contributions we might have made during our years of service…and it does seem quite clear that they can’t wait for us to kick the bucket and join the heavenly choir so they will not have to pay us our measly pensions anymore. Tsk! Tsk!

I would want to sell off my other car… 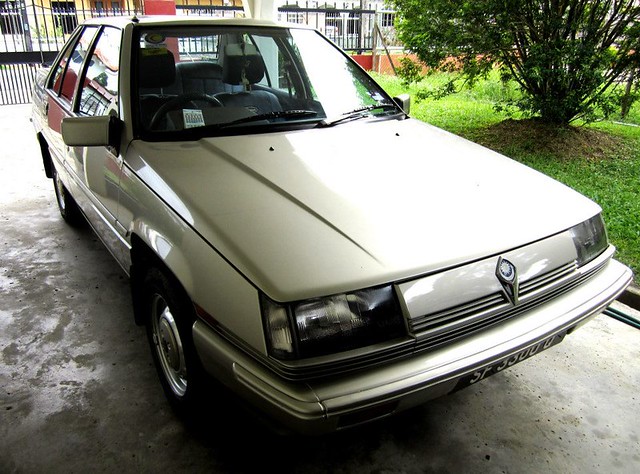 …though – my 24-year old 1st generation Saga. No, no, there’s nothing wrong with it…just that, both my missus and I are no longer working so we do not need two cars anymore and this one is hardly ever used (since it’s parked on the inside of the car porch all the time) except when I have gone out and maybe my missus would need to go out for some reason, usually to the shops round the corner to get something. As I did say earlier, humans need to stay active, both physically and mentally or the body tissues and muscles would waste away and they will start becoming forgetful and eventually, senile…and similarly, if you do not use your car regularly, it is not good for it at all.

I had a problem with this one as like all those national cars from that time, they would rust…badly and it did not help one bit that my missus used to work shifts so it was left outside in the sun, moon and rain day in, day out. The guy at the paint shop said it was like cancer, eating you up inside out and I had to replace the top/cover of the boot as there was a hole going right through it when I got it resprayed two years ago, after my missus retired. It’s the same with humans, isn’t it? If there is a cancerous growth, you may need to go for surgery to remove that problematic part of your anatomy.

Actually, between the two, I think this one has more power and the body is much stronger, more solid…but I am more used to the other one since I’ve been driving that one all the time. I went and asked my mechanic and he too told me that I would not get much for it and since it is running well and is not causing any problem, I might as well keep it as a spare. Sigh!!! I guess I will just hang on to it…or both, actually, till they decide for whatever reason to call it a day and then I can sell it off as scrap metal or something. It’s the same with humans, isn’t it? Once the time comes, they will just send you off to your new home and it’s adios…bye bye!!! Life’s like that, I guess.