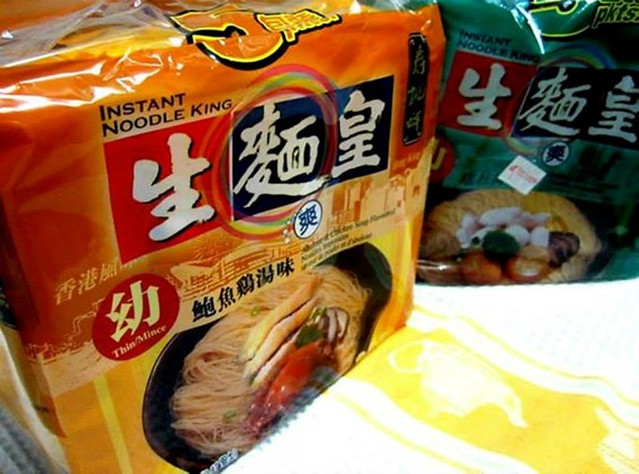 …when I was in Miri and they did not taste all that great, not at all. I would have thrown them all away had they not been so expensive so I decided to get rid of the seasonings and just use the noodles. 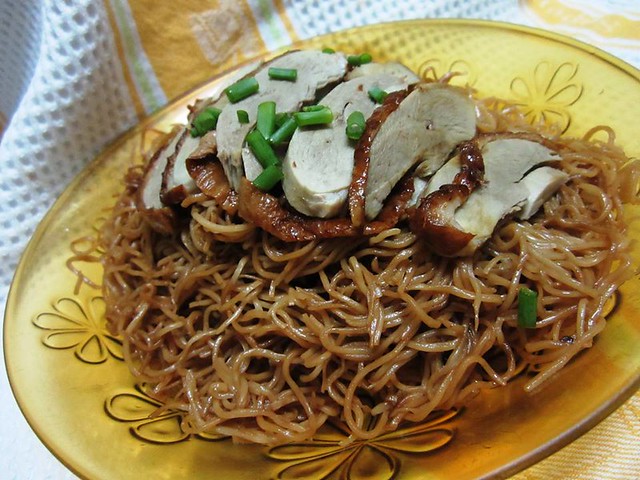 …and I had them served with some slices of roast duck that I had in the fridge but no, I did not think it was all that great as I could still detect the smell of the noodles and that did not tickle my fancy. It would be much nicer with our own local-made mee sua or dried noodles.

So, on another morning, I decided to fry some… 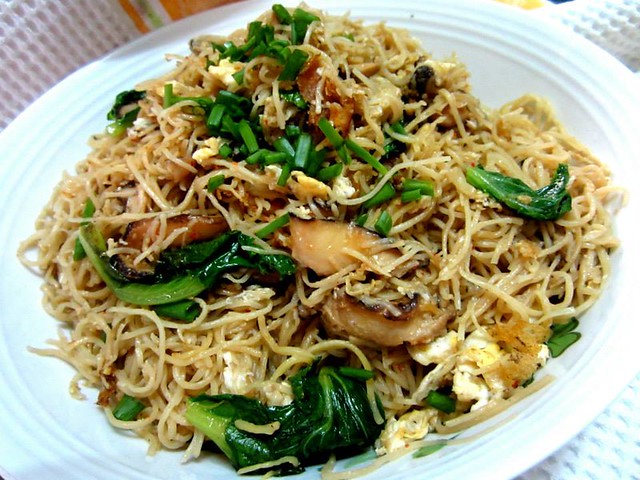 …for breakfast with some fresh shitake mushrooms and egg with a little bit of green vegetables thrown in. It sure tasted a whole lot nicer, fried…so I guess I could do the same with those in the packets that I still have left.

Moving on from the noodles, I also mentioned in my post a few days ago that my in-laws were in town for the long Gawai Dayak/Duānwǔ or Dragon Boat Festivals weekend. My brother-in-law brought a whole lot of stuff from Bintulu – fish, cincaluk (fermented shrimps), belacan (dried prawn paste) and even a bag of lemons, probably from his garden. My sister-in-law from Kuching brought some nice steamed paos (buns) and sio bee (meat dumplings) and some salted fish-meat patties that she made herself and also some belacan though she kept insisting that hers would not be as nice as the ones my brother-in-law brought from Bintulu. I wouldn’t know for sure at this point in time as I have not tried it yet.

However, the other day, I did take three slices of the big ikan tengirri (mackerel) that my brother-in-law gave us and deep-fried them for lunch… 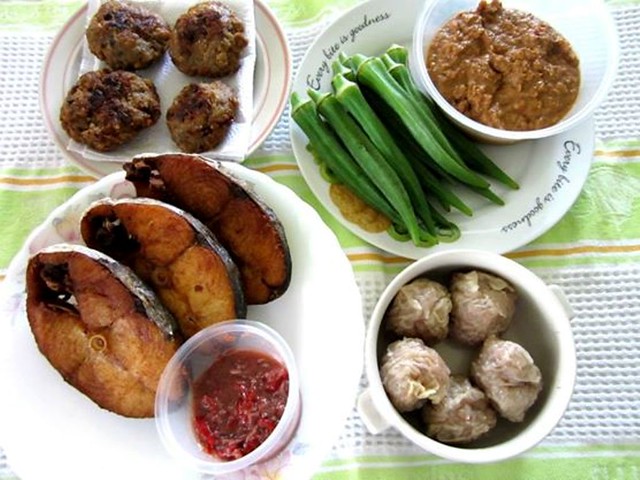 …with some cincaluk dip to go with it and I boiled some ladies’ fingers to eat ulam-style with sambal belacan plus we also had the sio bee and the salted-fish patties from my sister-in-law. That certainly was a delightful lunch and we enjoyed everything so much that we finished it all in one sitting. That was why I had to cook something else for dinner that day… 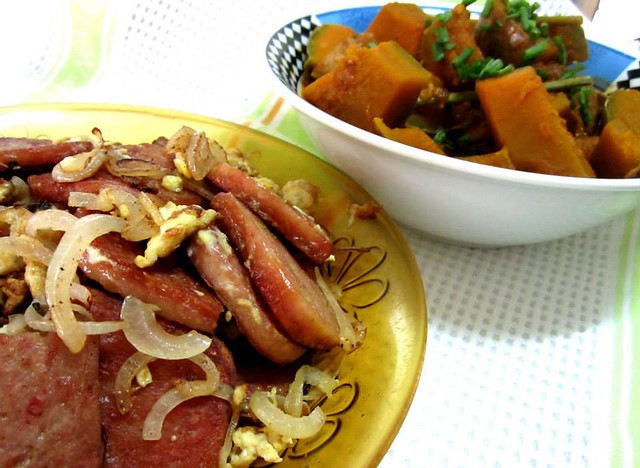 …and for that, I opened a can of luncheon meat and fried that with egg and sliced Bombay onions. This is a brand that I saw on the shelf in one of the supermarkets here – Porkies, a product of Denmark and it claims to contain 85% meat. True enough, it wasn’t as soft and wobbly as some of the other brands, probably due to their high fat content and it tasted really great. At over RM8.00 a tin, I certainly would buy that the next time around should I feel like having luncheon meat again – there are others (like SPAM, for instance) that are a whole lot more expensive.

To go with the meat, I cooked the pumpkin that I had seen sitting in the fridge for quite a while now and as I was feeling lazy (which would be the case most of the time, I have to confess), I decided not to go through all the chopping and pounding to get the sambal hay bee (dried prawn paste) ready to fry that with. Instead, I just used this packet of masak merah ingredients along with one chopped shallot and a couple of the skinny serai (lemon grass) that I have growing in a  pot outside my house. Ooooo…I thought it tasted really good and it was so delightfully spicy but my girl did not really like it as she felt that it drowned out the taste of the pumpkin that she liked a lot.

And talking about my girl, she made this fritata for lunch a day or two later… 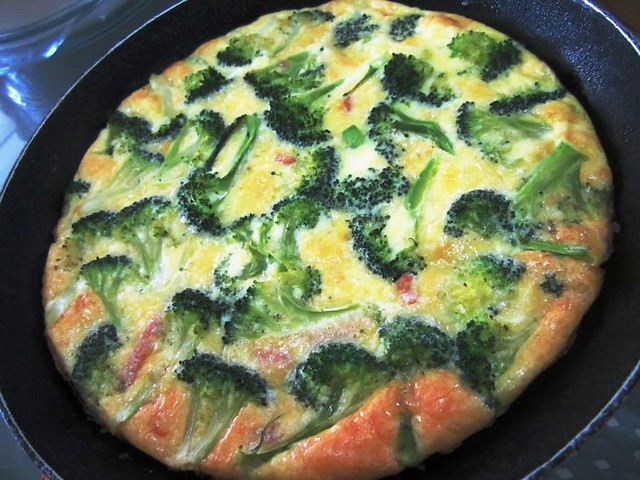 …and being the jakun that I am, I did not even know how to spell the name. Blush! Blush!

Of course, it was very nice – it couldn’t possibly be otherwise with all that ham and cheese that went into it… 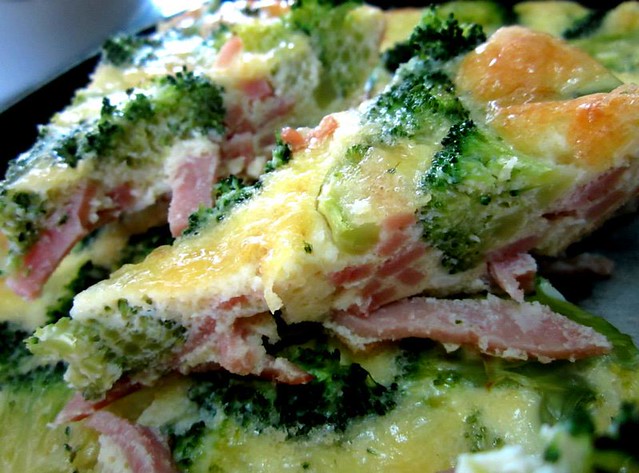 …and if anyone is interested in making that as well, here’s her recipe:
Broccoli Fritata
Ingredients
6 eggs
1 head of broccoli
6 slices of sandwich ham
half slab of cheddar cheese
a pinch of salt
2 dashes of pepper
1 tbs of olive margarine spread
*The original recipe calls for 12 eggs and uses bacon. I’m trying to be more health conscious. Haha.
*The type of meat and cheese you mix into the egg mixture in optional.
You could also add in tomatoes, mushrooms or fresh peas or whatever tickles your fancy.

Steps
1. Wash the head of broccoli thoroughly first. Then, slice it into smaller pieces.
2. Slice the sandwich ham into thin strips.
3. Grate the half slab of cheddar cheese.
4. Crack the eggs into a bowl. Put in salt, pepper, and the grated cheddar. Whisk everything up.
5. Heat up the frying pan and put a dollop of olive margarine spread. When it starts sizzling, add in the ham.
Stir it around until the ham has slightly browned.
6. Add in the egg mixture. Shake the pan around to make sure its surface is evenly coated. Then, add the broccoli.
7. Turn the heat down to let the egg mixture cook thoroughly. Meanwhile, heat the oven up to 180 deg cel.
8. When the oven’s hot enough, put the frying pan in. It’s ready when it’s all fluffed up with a golden brown surface.

Obviously, you will need a pan with a detachable handle if you were to put that in the oven. Luckily, we have a pan in the house – the handle has come off but we still use it as it seems to be a whole lot better than all the newer pans we have, just like my old and faithful, no-longer-round wok that I use all the time in my cooking posts. Hmmm…that sure goes to show that the older you are, the better you get, right? Guess the same thing applies when it comes to people as well, doesn’t it? Hehehehehehe!!!!