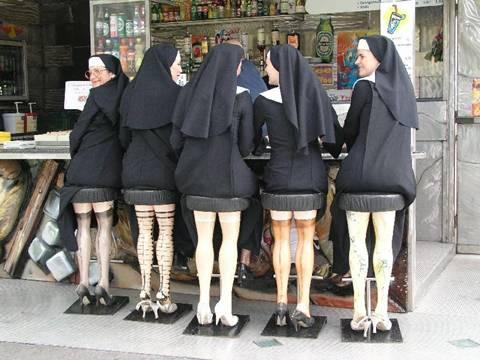 What did you see in the photograph? A group of indecently-clad nuns?

Actually, somebody sent me this via email sometime ago (Can’t recall exactly who it was. Was it you, Gundot?) and I’ve posted it in the TraxxFm fansite (The webmaster did it for me!). I was surprised by the fact that there were some people who actually saw a group of nuns in fishnet stockings!!! Now, would you consider that an optical illusion or the reflection of a person’s state of mind?

As the saying goes, “there is none so blind as he who will not see,” and more often than not, people see what they want to see. It is indeed very sad that when someone is blinded by his prejudices, he may miss the beauty in what he sees.

If we go to a place, for instance, and from what we have been told (or read in some negatively-inclined individual’s blog), it is a boring place and everything about it is horrible, we may criticise and pick on everything when we are there…and we may not see all the good things that are right in front of us to behold.

Likewise, in relationships, we may be influenced by gossips and what others have told us of a person, so much so that he does not even get a chance to disprove all the rumours that surround him…and whatever good he may do will not be appreciated.

So, to sum up, here’s some food for thought to ponder upon: “Everything is beautiful in its own way…” (Ray Stevens). Have a nice weekend, everybody!